Some Facebook commenters took the matter seriously and referenced politics, despite the fact that the joke or mistake showed a price per pound of $9,999.99. 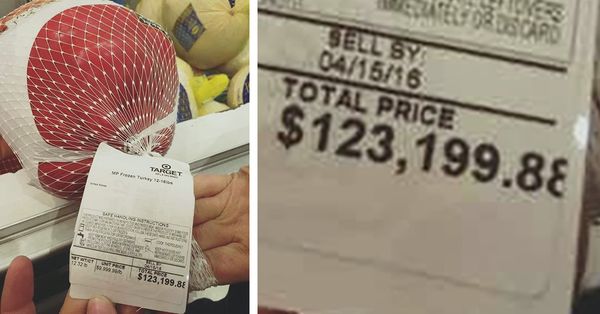 Claim:
The label on a frozen turkey allegedly offered for sale at Target lists its price as $123,199.88.
Rating:

On Oct. 16, 2021, a photograph of an expensive holiday item was posted in at least one Facebook group. In the picture, a label with a Target logo showed that a frozen turkey had been priced at $123,199.88. However, this was clearly a joke, or possibly a mistake by an employee. The Target label also said the frozen turkey was priced at $9,999.99 per pound, which was the reason the price was so high. Further, it showed an expiration date of April 15, 2016, meaning it was outdated.

The Facebook group where the picture appeared was described as being "for law enforcement and their supporters only!" However, the majority of the posts had little or nothing to do with law enforcement. Most of the members appeared to share memes and other content in support of former U.S. President Donald Trump, far-right conspiracy theories, and anti-vaccine beliefs.

A few of the group's members appeared to see that the frozen turkey photograph was a joke or mistake. The post was captioned with: "Biden is putting out government surplus turkeys. Get them while you can." However, others seemed to take it seriously. Some of the comments referenced U.S. President Joe Biden. "Don't laugh. The way our country is being treated, we can soon be Venezuela or Cuba," one member commented. Another user posted: "President Trump had respect for the police. No turkey for Thanksgiving."

Despite the Biden and Trump comments, the picture was captured before either man took office as president. According to a Facebook post, it looked like it was originally uploaded in November 2015, and had this caption: "My friend Debbie encountered this extremely overpriced turkey at Target. What's up with poultry prices in Florida? If you have $123,000 to spend on turkey, please see me. #turkeytalk #targetturkey." The caption also included a smiling emoji and two turkey emojis, which showed that the user posted the picture in good fun.