Yes, a Frontier Airline Passenger Was Duct-Taped to His Seat

The passenger was arrested when the flight landed. 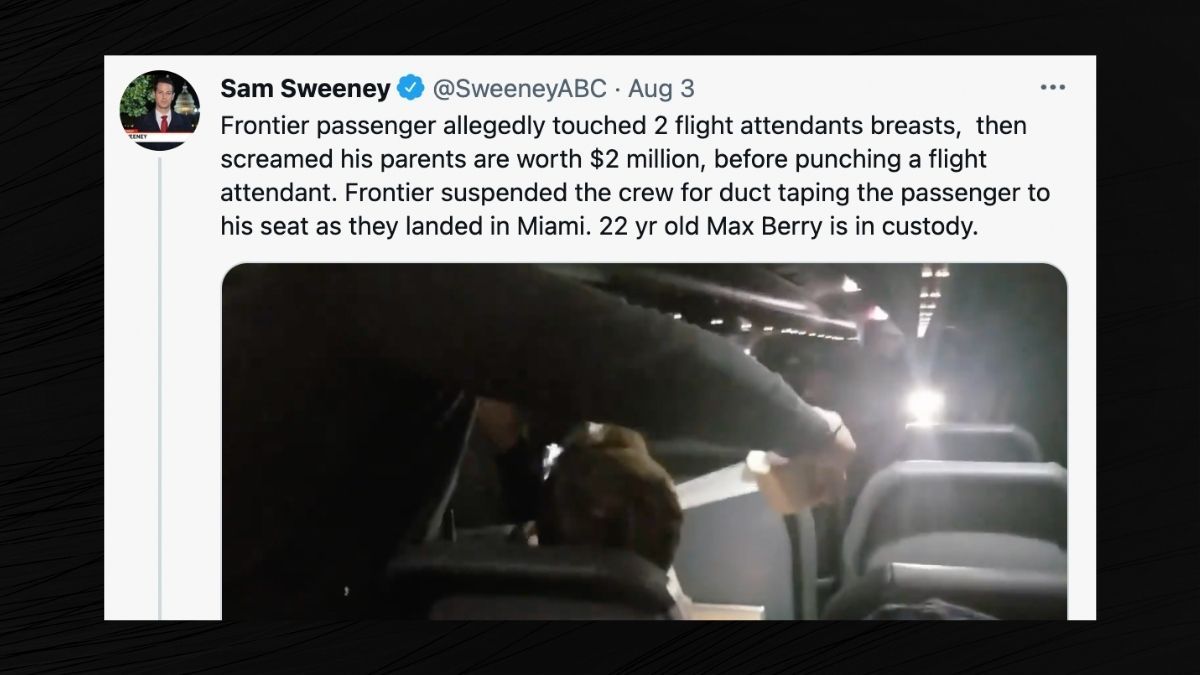 Claim:
The crew of a Frontier Airlines flight restrained an unruly passenger with duct tape.
Rating:

A video went viral showing a passenger on board a Frontier Airlines flight from Philadelphia to Miami getting physical with the flight crew and boasting about the wealth of his family. The crew resorted to restraining him with duct tape.

ABC News transportation reporter Sam Sweeney posted video of the incident to Twitter, where it has been viewed millions of times:

In the video, the passenger, later identified as Max Berry, can be heard saying, "You guys fucking suck. My parents are worth more than $2 million-goddamn-dollars," as the other passengers laugh. He later started throwing punches at a flight attendant who restrained him while calling out for help. Then, as other passengers laughed, the flight crew restrained Berry with duct tape.

Berry was also accused of groping two female flight attendants and was arrested when the plane landed in Miami.

Frontier stated that it had placed the crew involved in the incident on paid leave amid an internal investigation into the way in which Berry was restrained. In an emailed statement to Snopes, a spokesperson for Frontier said the airline "maintains the utmost value, respect, concern and support for all of our flight attendants, including those who were assaulted on this flight," and added that placing the crew on paid leave "is in line with an event of this nature pending an investigation."

The initial response to the incident by the airline, in which Frontier had stated the flight crew involved would be "relieved of flying pending completion of an investigation," was quickly slammed by the Association of Flight Attendants, who said that it could cause flight crews to feel unsafe coming to work.

Berry was reportedly intoxicated. We asked Frontier whether the airline had limits on how much alcohol it serves to passengers in flight and will update this story if we receive a response.