Are These Frogs with Eyes Inside Their Mouths Real?

How else should a frog watch what it eats? 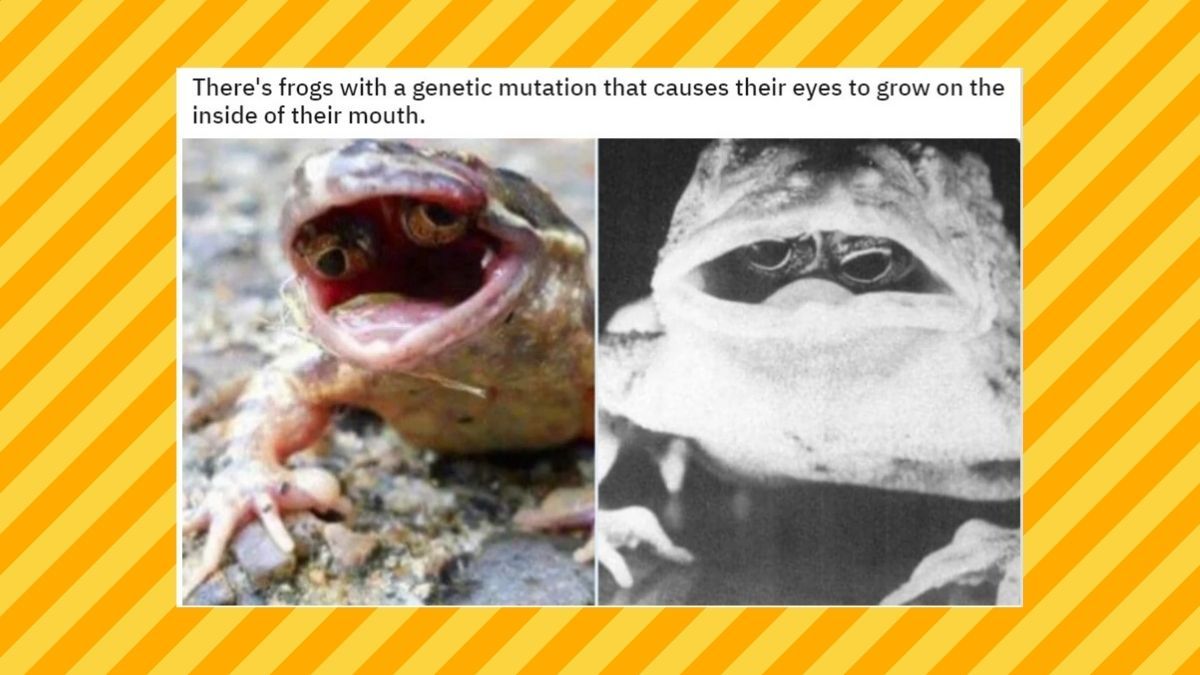 Claim:
A photograph shows a frog that has its eyes on the inside of its mouth.
Rating:

We have not been able to source the color photographs of the frog. However, a similar black-and-white image of a toad with eyes on the inside of its mouth, the result of a macromutation, is authentic.

Photographs supposedly showing a frog with eyes on the inside of its mouth is frequently circulated on social media: We have not been able to source these images, which first went viral in late 2016 when they were shared along with a brief piece of text claiming that this mutation was the result of a parasite.

We might be a little skeptical of these images on their own, but these are not the only photographs that depict a frog (or toad) with this odd mutation. Scott Gardner, a photographer with the Hamilton Spectator, captured a similar image that showed a toad with eyes on the inside of its mouth circa 1992. In fact, Gardner's photograph is often circulated side-by-side with the frog featured in the above-displayed image set: The BBC wrote about Gardner's photograph (right) in 2014, explaining that this odd-looking amphibian was found by two little girls in Ontario, Canada, in the early 1990s:

Found surviving in a garden by two little girls in Ontario, Canada, this one-of-a-kind toad was likely affected by a genetic phenomenon that biologists call a macromutation.

A macromutation is a mutation that has made a significant impact on an organism, caused by a change in a regulatory gene that's responsible for the expression of an array of structural genes. While the process of adaptation is widely regarded to be driven by an accumulation of tiny genetic changes, biologists have suggested that macromutations could be the cause of certain adaptations.

In an article entitled "The Toad And I" published by Toronto.com, Gardner recounted the moment he first encountered this toad:

I remember with crystal clarity where I was when I received the toad call. I was in Burlington, photographing a girls' baseball game, when my two-way radio crackled, dispatching me on matters far more important than baseball. A toad had been found. Not your ordinary toad, mind you, but one with eyes inside its mouth.

Suspecting a crank call, I rolled my correctly situated eyes as I made my way to the house at the outskirts of the city. Sure enough, the toad was just as described. I had to wait for it to open its mouth to look around so I could photograph the eyes. A quirky little photo, I thought.

It's not clear what caused this mutation, but the BBC noted that it may have been the result of a parasitic infection:

It's been suggested that the cause of the mutation was the result of a parasitic infection by a trematode worm (Ribeiroia ondatrae). Trematode infections have reportedly been linked to an increasing number of amphibian limb mutations, particularly missing, malformed, and extra hind legs.

It's also worth noting that, although it is certainly unusual for a frog or toad to have eyes inside of its mouth, this macromutation doesn't place the eyes far from their normal position. In fact, generally speaking, some frogs may retract their eyes when they are eating to help them swallow. Here's an excerpt from a 2004 study this examined this unique manipulation of eyeballs:

Most anurans retract and close their eyes repeatedly during swallowing. Eye retraction may aid swallowing by helping to push food back toward the esophagus, but this hypothesis has never been tested. We used behavioral observations, cineradiography, electromyography and nerve transection experiments to evaluate the contribution of eye retraction to swallowing in the northern leopard frog, Rana pipiens. Behavioral observations of frogs feeding on 1.5 cm long crickets reveal a high degree of variability in eye retraction and swallowing. Eye retraction can occur bilaterally or unilaterally, and both swallowing movements and eye retraction can occur separately as well as together. During swallowing, cineradiography shows that the eyes and associated musculature retract well into the oropharynx and appear to make contact with the prey item. This contact appears to help push the prey toward the esophagus, and it may also serve to anchor the prey for tongue-based transport. Electromyographic recordings confirm strong activity in the retractor bulbi muscles during eye retraction. After bilateral denervation of the retractor bulbi, frogs maintain the ability to swallow but show a 74% increase in the number of swallows required per cricket (from a mean of 2.3 swallows to a mean of 4.0 swallows per cricket). Our results indicate that, in Rana pipiens feeding on medium-sized crickets, eye retraction is an accessory swallowing mechanism that assists the primary tongue-based swallowing mechanism.

Natural historian David Attenborough also showcased this phenomenon in his "Fabulous Frogs" documentary for the BBC: