No, visitors to a Texas haunted house didn't discover a man eating a teenaged boy inside the attraction. 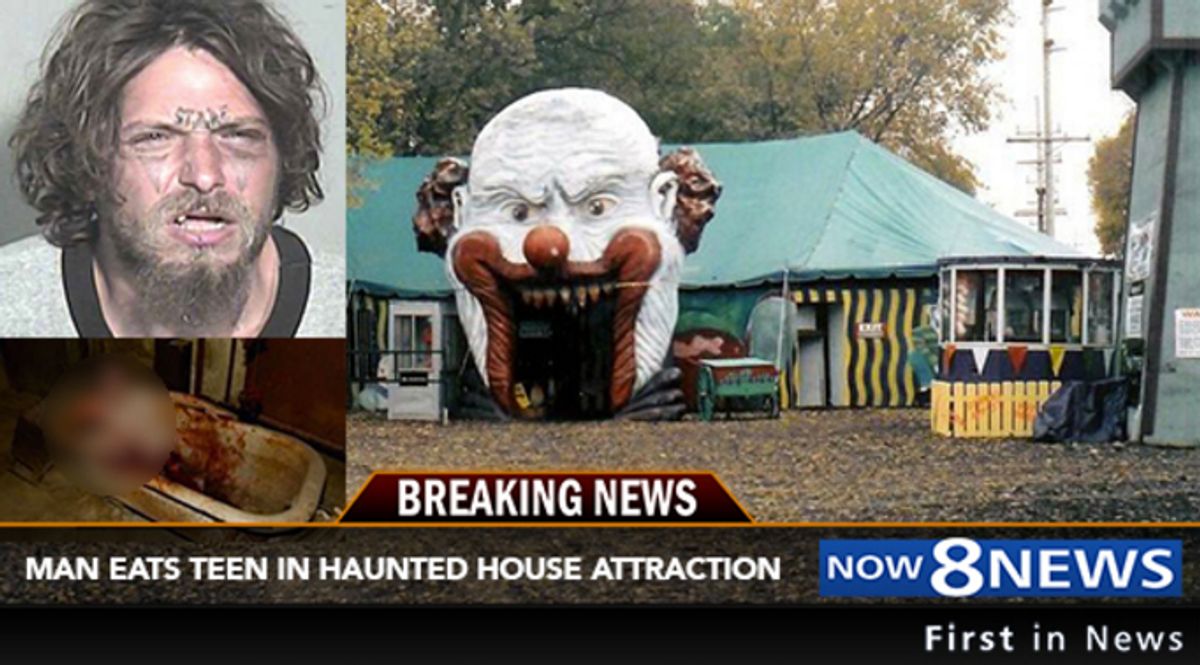 [green-label]Claim:[/green-label]  People visiting a haunted house in Texas were horrified to discover a man eating a teenage boy inside the attraction.


Is this article a hoax?


Fright junkies discovered more than they bargained for at a haunted house attraction over the weekend, when they stumbled upon what they thought was part of the show. The Fright Night Haunted Dreams attraction in Austin, Texas brought in hundreds of people looking for a good scare this Halloween season. But on Friday night, this “Haunted Dream” maze turned into a reality for one teenage boy.

Eyewitnesses say they were halfway through this macabre haunted house when they came across a scene with a crazy looking man biting into his victim that lay in a dirty bathtub. At first, it was just another scene within the haunted maze, but as they looked closer they saw the young boy that was screaming for his life was really in excruciating pain ... Police and emergency response teams arrived on scene within minutes, but it was too late for the young teenage boy who’s name has not yet been released. He was dead when medical staff arrived.

Now8News doesn't include a disclaimer informing readers it carries fake news, and its design could easily be mistaken for that of a regional network news site. However, the web site solely publishes fabricated, outlandish stories to attract readers via social media shares.

In July 2015 the site released articles about a man purportedly arrested for having sex with a pig in a Walmart bathroom, another suggesting aborted fetuses were used in making Chicken McNuggets, and a third reporting (falsely) that bananas from Walmart were infested with parasitic worms. In October 2015, Now8News spread stories about a woman who purportedly was caught while engaged in a sex act with a breakfast sausage (and another claiming a woman was arrested for sampling feminine hygiene products in Walmart).

Moreover, the mug shot used by the site (purportedly taken after an October 2015 arrest) appeared on a blog's gallery of humorous arrest photos. The individual depicted wasn't named, but the photo dated back to at least 2009.