Is Freya the Walrus Sinking Boats in Norway?

She just needs a place to relax. 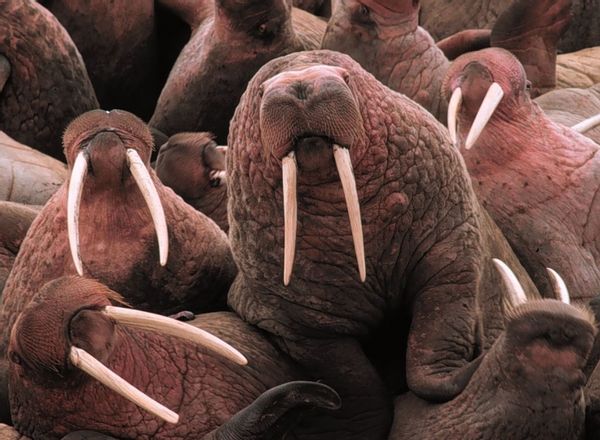 Claim:
A 1,500-pound walrus named Freya has been lounging on boats off the coast of Norway, often damaging them and causing some to sink.
Rating:

It’s hard out there for a walrus like Freya who just wants to sunbathe on boats. Since late 2021 she has traveled long distances from her home in the Arctic Circle, stopping in the U.K., the Netherlands, Denmark, and Germany. She's been in Norway most recently in the summer of 2022, where she annoyed locals after lying on their boats and damaging them, thanks to her 1,500-pound frame.

More than a hundred miles south of Oslo, Norway, Freya posed a problem for marina authorities, who found her sunbathing on boats. Some of the vessels were just too small for her and ended up sinking into the water. The mayor of the town of Kragerø told Deutsche Welle in late June 2022 that officials were planning to get Freya her own sunbathing spot on a floating dock. They planned to move her on the dock to a new home along the coast.

Around mid-July, she was spotted in Oslo, where one rower even tried to spray Freya with a water hose as she lay on the jetty of his rowing club. Eventually she rolled into the fjord, according to Dagbladet, a Norwegian tabloid newspaper. Oslo harbor police also tried to flush her away from a boat using water hoses.

But Walrus researcher Rune Aae is concerned about the treatment Freya has been getting from visitors and locals trying to either catch a glimpse of her or trying to shoo her away.

“She doesn’t get any peace,” Aae told Norwegian news agency, NTB. He observed how she was surrounded by several boats and jet skis, and how she made sudden movements when they got too close.

“Everything indicated that she wanted to get away. But she couldn’t because she was trapped,” he said. “She needs to relax for up to 20 hours. When she is constantly stressed out by people and their presence, it is not good for her.”

At some point during her Oslo sojourn, a video was taken by Norwegian tabloid VG of Freya attacking a swan. A witness told VG that the swan had died.

Freya normally stuck around for two to four days in a given area before moving on, according to Aae.

The BBC reported on Freya’s whereabouts in Shetland in December 2021, where a wildlife photographer noted that she was distinctive because of the “little pink spot” on her nose. While there, she was spotted resting on a salmon farm cage.

And in late October 2021 she was discovered sleeping on a submarine on a naval base off the coast of North Holland. She was reportedly the first of her species to visit the Netherlands in 23 years. She actually chose to end up on the “Walrus class” of submarines, as tweeted by the Royal Netherlands Navy who shared regular updates on her days there:

Freya has been both hailed and reviled by the Norwegian tabloids for her habits, and the world has been following her journey for almost a year. However, the Natural History Museum in the U.K. pointed out that walruses like Freya are being forced to travel further due to a loss of habitat as a result of ice caps melting. The increase in effort may result in starvation, exhaustion, and greater risk of death as more mammals crowd land surfaces.

Travis Park, a museum researcher said, “If we keep losing sea ice we will probably see a reduction in their population but it probably wouldn't drive them to extinction. Shipping traffic and acidification pose a greater threat. Vessel strikes are a hazard, while shipping pollution and ocean acidification put their prey, such as bivalves and clams, at risk.”

Most experts advise that anyone who spots a walrus around such populated areas should give them space, leave them alone, and allow them to rest.

On Aug. 14, 2022, Norwegian authorities killed Freya, saying she was posing too much of a threat to human safety. The authorities had warned that if people did not stay away from her, she would have to be killed, but people mostly ignored their directive.

“She chased people on paddle boards and kayaks," Olav Lekver, spokesperson for the Norwegian Directorate of Fisheries, said according to the New York Times. "In the end, we couldn’t see any other options [...] She was in an area that wasn’t natural for her.”

Aea disagreed. "Many other options should’ve been tried before killing her," he wrote. "Freya had sooner or later gotten out of the Oslofjord, which all previous experience has shown, so euthanasia was, in my view, completely unnecessary."