Did a Fox News Guest Say 'Russia Is Now Being Canceled'?

A video clip from a Fox News TV show was widely shared following Russia's invasion of Ukraine in 2022. 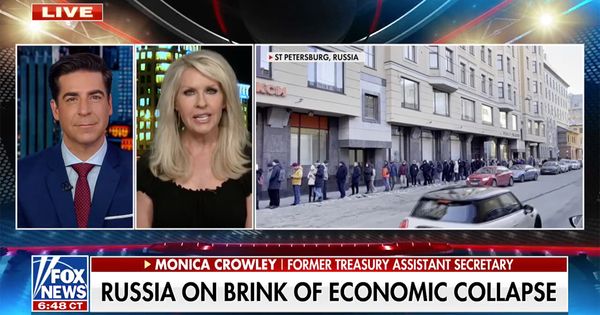 On March 1, 2022, a video clip was widely shared on social media that appeared to show a guest on a Fox News television show saying, "Russia is now being canceled." It was viewed around 100,000 times in two TikTok videos and hundreds of thousands of times on Twitter:

This was a genuine statement made by Monica Crowley on the March 1, 2022, episode of "Jesse Watters Primetime," a TV show on Fox News that airs on weeknights and is hosted by Jesse Watters. Crowley was the former assistant secretary for public affairs at the Treasury Department under U.S. President Donald Trump.

Her remarks came one day after "Star Trek" actor George Takei tweeted: "Waiting for the right to complain how Russia is being canceled."

While it's true that Crowley referred to the sanctions placed on Russia as the country being "canceled," there was no further discussion of the apparent reference to "cancel culture" by either Watters or Crowley. Also, during the segment, neither of them appeared to be taking a stance against or "complaining" about the sanctions that had been imposed on Russia following the country's invasion of Ukraine. Rather, Crowley's words urged caution in the hope that the global economy wasn't impacted by the financial effects felt by Russia.

We transcribed the entire question and answer to present the complete remarks that resulted in the words, "Russia is now being canceled":

WATTERS: Putin may be pummeling Ukraine this evening, but not all is well in mother Russia. Crippling sanctions are piling up and an economic collapse under Putin's watch seems likely. In fact, it's starting to happen. Their currency has already crashed to a record low. Hyperinflation is on the horizon. And Russians are actively making a run on the banks, trying to withdraw all their money while they still can. Even the Russian state's biggest moneymakers have become a sinking ship, like oil companies, Gazprom, and Rozneft, whose shares plunged almost in half thanks to boycotts from Western countries.

And Putin's out of silver bullets, too. Now that the West froze his central bank's reserves, Putin has lost access to a war chest worth close to $650 billion. He was banking on using that cash to stabilize the economy. And now the signs indicate that Putin's banking system is toast. What we're watching play out is similar to Russia in the late 1990s when the ruble plunged and their biggest banks collapsed and Russia went underwater after they defaulted on their debt.

Russians turned on their president, Boris Yeltsin, and then came Putin to stabilize the economy. And the Russian people loved him ever since. The Russians could easily turn on him if all goes to hell. And it seems like history is about to repeat itself, as Russia's economy is set to collapse. And Russians might look elsewhere for leadership.

Joining me now [is] Monica Crowley, former assistant secretary of the Treasury Department. All right, Monica. What happens when the ruble becomes about as worthless as the Zimbabwe currency? Do they turn on Vlad or what?

CROWLEY: Yeah, the political pressure, Jesse, is going to be absolutely enormous on President Putin and, in fact, you are already seeing those trend lines developing in Russia. You are seeing a lot of protests. You are seeing a lot of individuals being arrested. Look, Russia is now being canceled, right? I mean, between the fierce Ukrainian resistance and the widespread international financial sanctions and boycotts and Russian teams being barred from international competitions. Russia is being canceled. It is a different world. This is not something that President Putin ever had anticipated. So, an implosion of the Russian economy is going to have severe political consequences for him. But, we have got to be very careful that the spillover effect is not so severe that it takes down the global economy [and] sends the global economy into a worldwide recession, and affects us directly here at home.

The entire segment can be watched on the TV News Archive on Archive.org.

In 2016, The Associated Press noted that Crowley once worked under former U.S. President Richard Nixon many years after his early departure from the White House:

Crowley, a renowned scholar who holds a Ph.D. in international relations from Columbia University, is a foreign affairs and political analyst for the Fox News Channel. She is also a New York Times bestselling author and a columnist and online opinion editor of The Washington Times.

Previously, Crowley served as Foreign Policy Assistant and Communications Director to former President Richard Nixon from 1990 until his death in 1994. She was named “Woman of the Year” by the Clare Booth Luce Institute at the Conservative Political Action Conference in 2010 and received the “Excellence in Journalism Award” from the Women’s National Republican Club in 2014.

In sum, Crowley did go on Fox News and say the words, "Russia is now being canceled." For this reason, we have rated this fact check as, "Correct Attribution."