Was Fox News Banned as 'Propaganda' in Australia and New Zealand?

Rumors of a ban on the Fox News Channel in Australia and New Zealand seem to have materialized on Facebook and Twitter out of thin air. 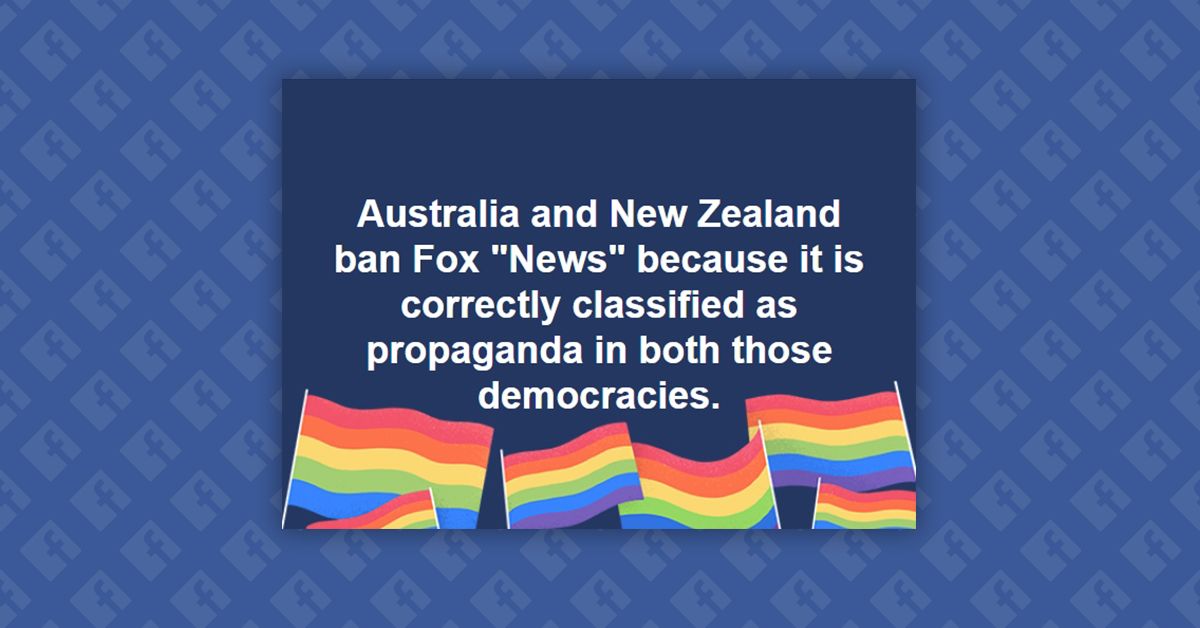 Claim:
Fox News Channel was banned in Australia and New Zealand after being deemed "propaganda."
Rating:

In late January 2018, a social media rumor claimed that Fox News Channel, whose programming is often criticized for conservative political bias, was banned in Australia and New Zealand after being deemed "propaganda."

Claims abruptly materialized on Facebook and Twitter enthusiastically parroting the claim despite a complete lack of media coverage on the topic:

New Zealand and Australia have banned Fox News saying it does not fit in their democracies. They say it is propaganda. Smart countries. The U.S. is sinking fast under the Dictatorship of Trump and the Republicans in the eyes of the world.

@FoxNews is banned in Australia and New Zealand because it is classified as propaganda. We found no posts citing any sources to corroborate this claim.

We were also unable to confirm the underlying assertion that Fox News has been deemed "propaganda" by officials of either country, nor did we find precedents for the banning of specific news organizations on that ground.

We asked Ursula Cheer, a New Zealand law professor specializing in censorship and media issues, if there is any basis in that country's laws for banning a news station outright, and she assured us there is not:

Our broadcasters are bound by codes which include requirements of accuracy and fairness and require content to be lawful and not discriminate or denigrate, but the codes operate to allow public complaint after a programme has gone to air, not before. Successful complaints have been made against one or two of our fundamentalist TV channels for forms of incitement. The Broadcasting Standards Authority which deals with broadcasting complaints actually has the power to shut down a channel for up to 24 hours, but that is the worst it can do, and it has only exercised that power twice in its history. Otherwise it is reprimands, fines and compensation.

We also took a simple step to check the channel listings of the main pay television providers in Australia and New Zealand. Fox News Channel is still among their offerings. Australia's Foxtel cable and satellite television company offers Fox News on channel 604. New Zealand's Sky Network Television offers it on channel 088. We contacted representatives of both companies who were kind enough to confirm that they do, in fact, carry the channel.

"Such-and-such a country banned Fox News" has become a familiar social media trope in recent years. A 2011 variant of the rumor held (falsely) that the Fox News Channel was banned in Canada for running afoul of Canadian Radio-Television and Telecommunications Commission (CTRC) regulations prohibiting the broadcasting of "false or misleading news."

Rumors that Fox News was banned in the United Kingdom have been circulating ever since November 2017, when it was reported that the U.K.'s communications regulator Ofcom had determined that some of the company's programming was in breach of the country's impartiality rules. But although it's true that Fox News Channel was off the air in the U.K. by that time, it was because its parent company, 21st Century Fox, decided to cease broadcasting because the channel had failed to attract an audience there.