Legend about a developmentally disabled adult who captures a delivery person (or other front door caller), believing him to be a troll. 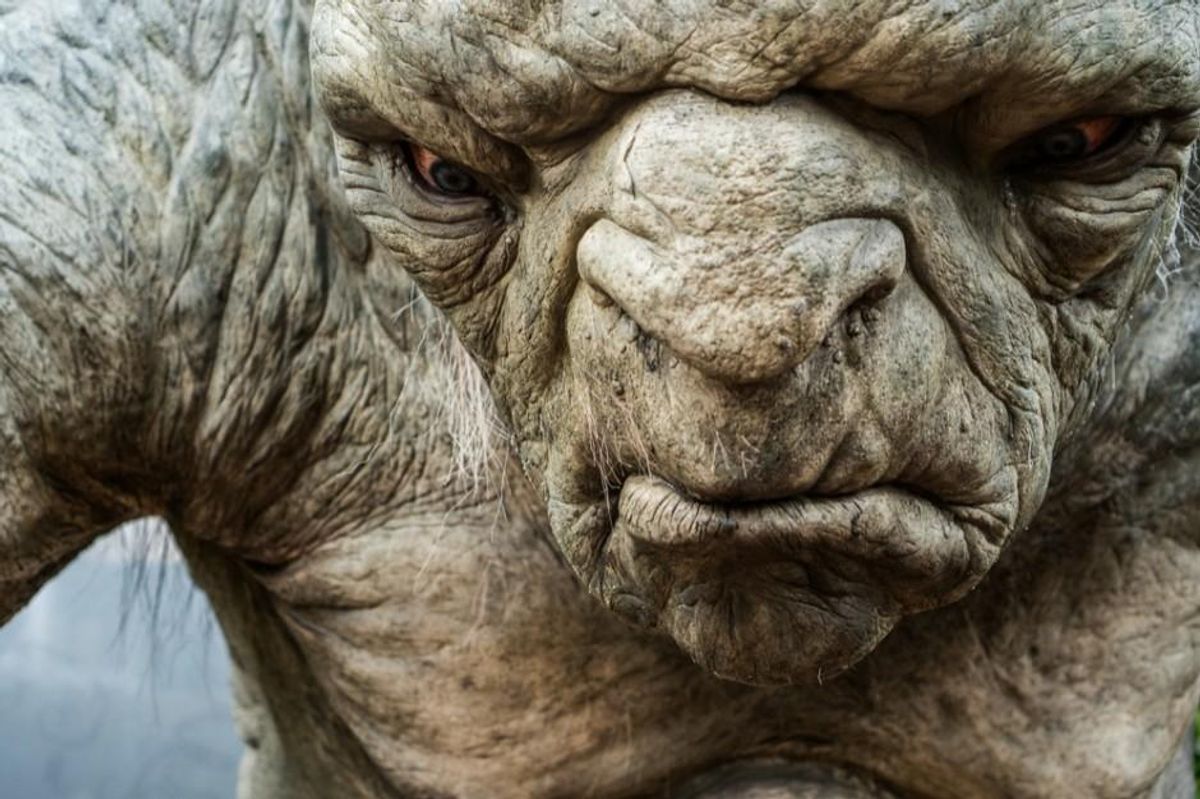 Claim:
A developmentally disabled adult captured a delivery person, Jehovah's Witness, or salesman after mistaking him for a troll.
Rating:

A story about a developmentally disabled chap who overpowers and holds captive a diminutive person (a "midget" or "dwarf") because he mistook him for a troll has been told a number of ways. The person captured is variously said to have been a salesman, a delivery person, or a Jehovah's Witness. His captor is described as having Down syndrome, autism, or as being "mentally challenged," and in various tellings he calls his mom, his sister, his dad, or even his "personal assistant/caretaker" to report his victory in locking up the creature he has encountered at his doorstep:

A woman got a call at work from her Down's Syndrome brother, who lived on his own. Panicked, he told her he'd found a troll and had him in his closet. The woman ignored the nonsensical call until she got off work, when she checked her phone and found that she had several missed calls from her brother. She called him back, and he repeated the story. When she went by his house to check on him, she discovered he had a midget locked in his closet! The little man was a door-to-door salesman who'd been making rounds of the neighborhood, and the woman's brother had freaked out upon meeting him. The man was understanding, telling the apologetic woman that he knew her brother meant him no harm, and simply waited for someone to come let him out.

[Collected on the Internet, December 2009]

Our friends wanted to take some other friends out for dinner. They have an (adult) autistic son and don't manage to get out on their own often. They hadn't been able to get someone to sit with him, but he seemed fine, they set him up with a pizza and his favourite DVD, and went to a local restaurant.

After about half an hour, the son phoned: "Mum, Mum, come home quick. I've caught a troll."

So they went straight home. The sitting room door was barricaded from the inside, and they could hear talking. The son dismantled his barricade once he knew the outside door was safely locked. Inside, sitting calmly, finishing off the pizza, was a midget, who had been innocently delivering leaflets door to door, before being taken captive.

[Collected on the Internet, February 2010]

This surgeon has a adult aged brother that has down-syndrome. He is highly functioning though. He has his own house, has a job, takes care of himself. He rides the bus back and forth to work.

Well, last week, the surgeon got a call at work from his brother. He said, "There is a troll in my closet, you have to come over here and get him out of here."

The surgeon said, "Look, there's no such thing as trolls. I am at work and I have patients to see." So he hung up.

The brother called his mom, and told her the same thing. "There is a troll in my closet. You have to come over here and help me." She told him the same thing as the surgeon, "There's no such thing as trolls."

So...a DAY later, the brother calls the surgeon's wife. He tells her, "There is a troll in my closet, you have to come and help me!!" She said what the others did. But the sound of his voice made her concerned, so she went over to his house.

When she got there, she looked in his closet......

I told that nurse she was lying. She swore it was a true story. She said the surgeon came in last week and told this story to the whole surgery suite. I laughed so hard. I know this surgeon. He is a hard ass, type of guy.

She said that the brother can't live by himself anymore and is living with the surgeon til they find him somewhere safe to live.

March 2010 versions were updated to present the person held against his will as a census taker, which was then underway. April 2010 versions, while again presenting the victim as a census taker, had him mistaken for a leprechaun instead of a troll, a bit of story that worked to make the tale a wee bit more believable by giving the developmentally disabled fellow who snatched him a motive for doing so, because lore has long held that a captured leprechaun must hand over his pot of gold to the person holding him.

Although the events described in the tale are not impossible, they're somewhat improbable. For this scenario to play out, not only would a developmentally disabled adult have to mistake a diminutive person for a fantasy creature such as a gnome or a troll, but he would also have to act on that assumption (as opposed to merely being bemused by it) by violently and physically overpowering the person at the door, then holding him captive. Finally, that developmentally disabled and violent (possibly delusional) adult would had to have been left unsupervised in the home.

The yarn about a delivery person's being mistaken for a fantasy creature and held against his will by someone whose mental capacities were insufficient to grasp the nature of what confronted him bears a strong resemblance to the legend in which a small child is mistaken for a gnome by drug-tripping teens, captured, and only recognized for the frightened child she is after spending the night locked in their closet. Mental incapacity plays the starring role in both stories, even though in the latter legend it's self-induced.

The "kidnapped midget salesman" story also bears a passing resemblance to the legend about a penguin smuggled home from the zoo, a tale that almost always features a developmentally disabled protagonist. In both legends, the abductor makes off with living creatures in the mistaken belief he gets to keep them.