Was Brazilian Footballer Arrested for Attempted Murder After Allegedly Kicking Referee in Head?

"He punched me in the face, I fell to the ground, got kicked, and passed out," the ref told a local reporter. 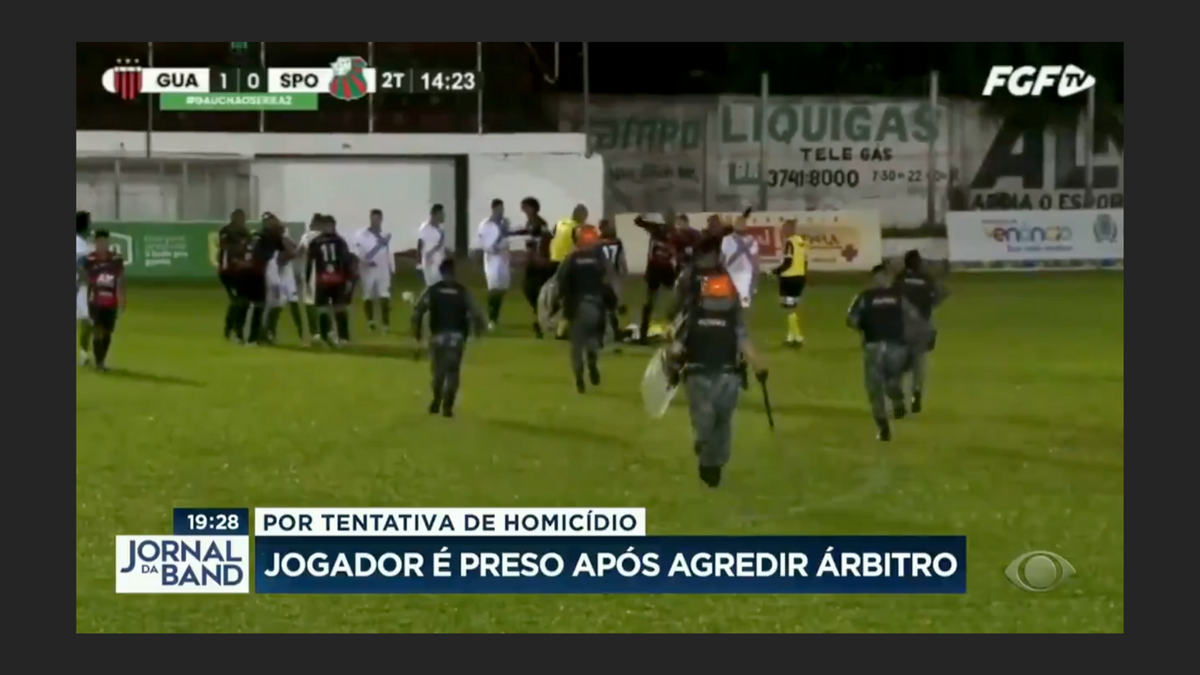 Claim:
On Oct. 4, 2021, William Ribeiro, a former player for Sport Club Sao Paulo, was arrested on suspicion of attempted murder after kicking a referee in the head during a match.
Rating:

In early October 2021, Snopes became aware of numerous reports claiming that Brazilian police had arrested a football (i.e., soccer) player on suspicion of attempted murder after he had supposedly kicked a referee in the head. The claim was accurate. Law enforcement officers arrested William Ribeiro, a player with Sport Club Sao Paulo, after he attacked a referee who had awarded a foul against him during an away game against Guarani-RS in Venâncio Aires on Oct. 4, according to multiple reputable news outlets including Reuters. That news outlet reported:

The game was halted 14 minutes into the second half while referee Rodrigo Crivellaro was taken to hospital. He was later released.

"I decided... to charge the lad with attempted murder because in my perception of the case he took the risk of (inflicting) a lethal outcome," the officer in charge of the case told Brazilian portal UOL.

Citing an interview with Vinicius de Lourenco de Assuncao, who is the police chief of Venâncio Aires and arrested Ribeiro during the game, a CNN story said the football official, Crivellaro, was kicked in the head and first responders took him from the stadium to the hospital unconscious.

"I don't really remember (what happened). My refereeing colleagues told me that I gave him a yellow card. He punched me in the face, I fell to the ground, got kicked, and passed out," Crivellaro told a local radio station, as reported by CNN.

Snopes reached out to police officials to learn if Ribeiro had ever been arrested before Oct. 4, and, if so, under what circumstances. A spokesperson for the state of Rio Grande do Sul's police department declined to answer saying, the agency "does not disclose third party information," according to a Google translation.

In the message, Pereira said Ribeiro's alleged actions at the Oct. 4 game — which was initially supposed to be a celebration of the organization's 113-year anniversary — was "one of the saddest episodes" since the club's start, according to a Portuguese-to-English Google translation.

"[It was] a fateful scene that shocked all those who live the sport in general," the statement read. "We apologize to the abused professional and his family," as well as the public. Additionally, Pereira's statement said the club terminated Ribeiro's contract, and that it would take legal action to ensure justice for the referee, according to the translation.

The Oct. 4 match restarted on Oct. 5, with Guarani winning 1-0, according to Reuters, which cited state football federation records.

Sport Club Sao Paulo is a small organization from Rio Grande, a city of about 200,000 people, that plays in the second division of the Rio Grande do Sul state championship, Reuters reported. We reached out to the club to learn more about the incident involving Ribeiro, and we so far have not received a response.

Footage of the attack spread widely on social media. On Oct. 5, around 6:30 p.m. (EST), the Brazilian news network Band Jornalismo tweeted about Riberio's arrest and shared a video recording of what happened on the field.

Then, the next morning, that same news outlet, Band Jornalismo, reported that hospital staff had released Crivellaro and that Ribeiro had posted bail, according to a Google translation of the below-displayed tweet. State authorities' investigation into Riberio's actions remains ongoing, as of this writing, and the athlete has yet to comment publicly, according to CNN.

This report was updated with the state of Rio Grande do Sul's police department's to Snopes' inquiry regarding Ribeiro.