Do Flu Vaccines Increase Your Risk of Testing Positive for COVID-19?

Anti-vaccine advocates, including Dr. Rashid Buttar, have seized on the COVID-19 coronavirus pandemic to spread misinformation. 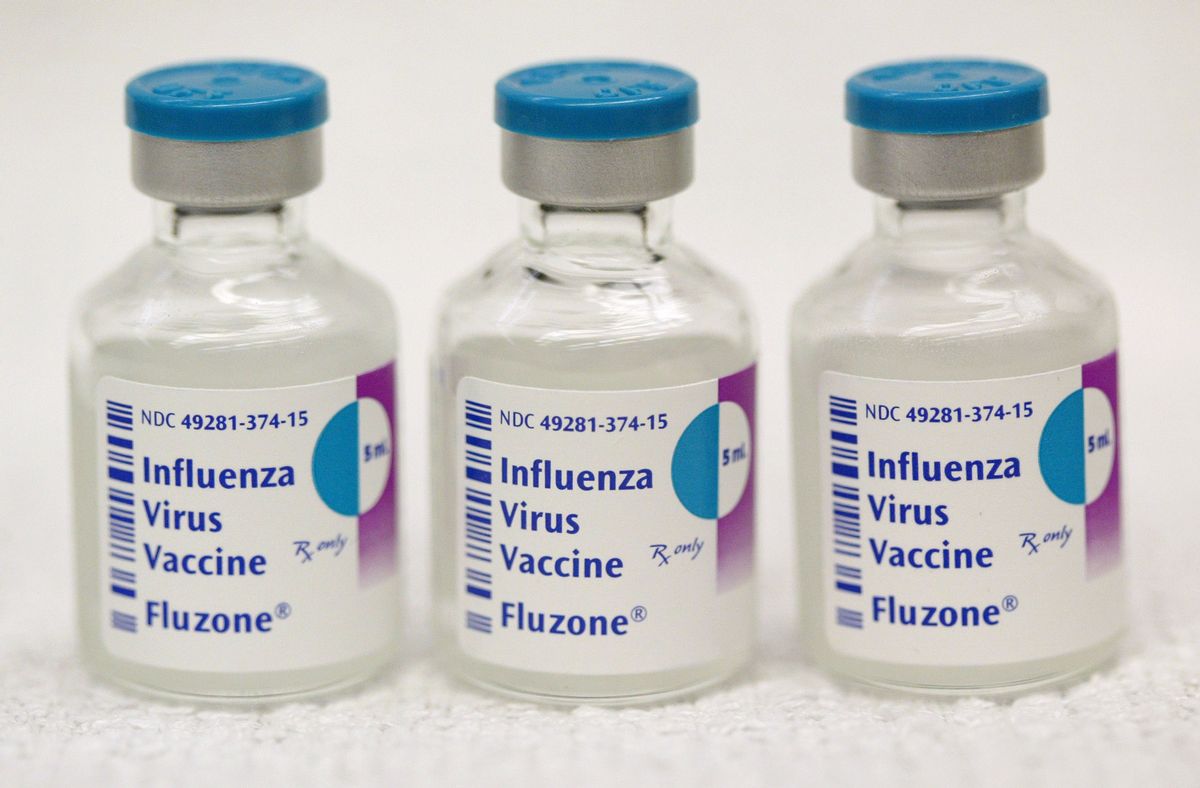 Claim:
People vaccinated for seasonal influenza face higher chances of catching SARS-COV-2, which causes COVID-19, or testing positive for the virus when they do not actually have it.
Rating:

Since the early weeks of the U.S. COVID-19 coronavirus disease outbreak in March 2020, social media users began spreading claims that people who had gotten vaccinated to increase their immunity against seasonal influenza were at a higher risk of catching or testing positive for SARS-CoV-2, the virus that causes COVID-19.

The assertions took a variety of forms and resurged with new viral postings over weeks. In March and early April, many cited misinterpretations of a 2020 study by an epidemiologist with the U.S. Department of Defense (DOD) that examined how the 2017-2018 flu season affected personnel. "You can get coronavirus from the flu shot," one person wrote to Snopes, referencing the DOD study (which we unpack below).

Then, in late April and May, the claims shifted to focus on remarks by anti-vaccine advocate and conspiracy theorist, Dr. Rashid Buttar, who said in a video interview posted on Facebook on April 19:

All the way back to 1984 all the way up to now, 2018, there are multiple studies that show that if you've had the flu shot... false positives on COVID-19 testing.

After that posting, numerous Facebook accounts circulated the below-displayed meme: For the purpose of this investigation, we will first dissect what appear to be the main sources of the claim regarding flu shots — the DOD study that examined the health of military personnel (which is available via a five-page PDF) and Buttar, and then provide scientific and medical research that prove their invalidity.

Greg Wolff, an epidemiologist with the U.S. Armed Forces Health Surveillance Branch, conducted the study, examining whether the flu vaccine between October 2017 and September 2018 increased his colleagues' risk for non-flu respiratory viruses, such as coronavirus, adenovirus or human bocavirus, via a phenomenon known as virus interference. Of the roughly 9,500 DOD employees he considered for the research — most of whom were male active duty service members between 18 and 35 years old — more than two-thirds had gotten flu shots that season; however, that group did not show significant odds of catching other respiratory illnesses compared to those who were not vaccinated, according to Wolff's findings. The study states:

The overall results of the study showed little to no evidence supporting the association of virus interference and influenza vaccination. Individual respiratory virus results were mixed, and some rebutted virus interference. Additionally those receiving the influenza vaccine were more likely to have no pathogen detected and reduced risk of influenza when compared to unvaccinated individuals.

In other words, the flu shot did not change the likelihood of test subjects overall catching other respiratory illnesses; however, each non-flu respiratory virus, such as coronavirus, showed varied results for how they impacted vaccinated DOD employees. At the same time, the vaccine protected personnel against influenza, the study found.

The idea of non-flu respiratory viruses showing individually different results on the test population is where anti-vaxxers focused their messaging. On April 16, 2020, more than three months after Wolff published the study, an anti-vaccine nonprofit called the Children’s Health Defense highlighted the DOD research on its website, with the headline, "Pentagon Study: Flu Shot Raises Risk of Coronavirus by 36% (and Other Supporting Studies)."

Authored by the organization's founder, Robert F. Kennedy Jr., a high-profile leader of the U.S. modern anti-vaxx movement, the web page focused on one aspect of Wolff's multi-pronged study of DOD personnel: 507 test subjects who did not have the flu and were vaccinated to increase their immunity against it tested positive for "coronavirus," while only 170 test subjects who did not have an influenza vaccine tested positive for "coronavirus." The study included the following table:

Examining non-influenza viruses specifically, the odds of both coronavirus and human metapneumovirus (which causes upper and lower respiratory disease with cold-like symptoms) in vaccinated individuals were significantly higher when compared to unvaccinated individuals.

But nowhere did the epidemiologist describe the type of coronavirus(es) for which his subjects tested positive, and the Children's Health Defense and other anti-vaxxers failed to make that distinction in their postings.

In science, the word "coronavirus" refers to a family of hundreds of viruses, not just one type of sickness. (Politicians and journalists frequently — and misleadingly — used the term in the early days of the COVID-19 pandemic, when the novel coronavirus was first reported in humans in Wuhan, China, in late 2019.) Per the Centers for Disease Control and Prevention (CDC), seven types of coronaviruses cause illness in humans, some of which are fairly common and cause seasonal cold-like symptoms while others cause more severe and sometimes fatal infections, including the Middle East Respiratory Syndrome (MERS) and Severe Acute Respiratory Syndrome (SARS).

The type of coronavirus that causes the COVID-19 disease is called SARS-CoV-2, and it was yet to be discovered at the time of Wolff's study in 2017 and 2018. That means no one in the experiment was confirmed to have the virus that causes COVID-19, and Wolff did not once refer to the novel coronavirus in his research.

Additionally, considering the size and makeup of Wolff's testing sample — as well as the overall findings of the study (mentioned above) and the fact that coronaviruses and influenza viruses vary by season and impact age groups differently — any assertion that the research definitely proves a connection between influenza vaccines and coronaviruses, including COVID-19, is misleading.

What Does Science Say?

According to the CDC, everyone 6 months and older should get an influenza vaccine each year to increase their chances of fighting the flu — even in the era of COVID-19 — though the effectiveness of the shot may vary person-to-person, year-to-year. The CDC states:

Any flu infection can carry a risk of serious complications, hospitalization or death, even among otherwise healthy children and adults. Therefore, getting vaccinated is a safer choice than risking illness to obtain immune protection.

In terms of whether the shot makes people more susceptible to other respiratory viruses, which in 2020 could include COVID-19, no strong scientific or medical evidence shows that flu shots increase people's risk of catching other viruses as of this writing. One 2012 study in the peer-reviewed medical journal Clinical Infectious Diseases, which considered a test sample of 115 children and teens, suggested the flu vaccine might increase people's odds of catching non-flu viruses. But a study one year later in the same peer-reviewed journal came to the opposite conclusion. The CDC said:

Many experts looked into this issue further and conducted additional studies to see if the findings (in the 2012 study of children and teens) could be replicated. No other studies have found this effect. ...

It’s not clear why this finding was detected in the one study, but the preponderance of evidence suggests that this is not a common or regular occurrence and that influenza vaccination does not, in fact, make people more susceptible to other respiratory infections.

Who Is Dr. Rashid Buttar?

Buttar, a licensed doctor of osteopathic medicine in North Carolina, is another leading source of the viral COVID-19-era claim that flu shots worsen your chances of catching the novel virus. In at least one spring 2020 video appearance (mentioned above), he claimed: "Studies clearly show that if you've had a flu shot, you're going to test positive for COVID-19," suggesting that the influenza vaccination contains antibodies that would make a person show a false positive on a COVID-19 test.

Buttar first gained public recognition via his hometown newspaper, the Charlotte Observer, in the late 1990s, advertising "advanced concepts in alternative and preventative medicine." A few years later, he and another doctor gained news coverage for enrolling patients with heart disease in a controversial study that tested chelation therapy, a treatment to remove metals from patients' bloodstream and commonly used to treat people with heavy metal poisoning. But in the late 2000s, Buttar's unconventional practices drew criticism. In 2007, the North Carolina Medical Board accused Buttar of "unprofessional conduct for departing from prevailing medical practice by treating patients with experimental, ineffective therapies and charging 'exorbitant' fees' for unproven therapies that didn't work," the Charlotte Observer reported. A local TV station reported:

Buttar has spent years selling skin drops at $150 a bottle as a treatment for diseases ranging from autism to cancer.

A panel for the North Carolina Medical Board in 2008 ruled Buttar should stop treating children or patients with cancer because "his alternative medicine practice is below accepted medical standards in North Carolina." But the doctor challenged that recommendation, and in 2010 the board and Buttar made a compromise: He could continue offering his treatments so long as his participants signed consent forms "acknowledging this practice is outside the mainstream," according to the newspaper.

The Federal Drug Administration (FDA) over the years has also cautioned Buttar against marketing unapproved treatments as drugs via his YouTube channel and media appearances, among other warnings.

His efforts gained new popularity among online conspiracy and doomsday promoters during the COVID-19 pandemic in 2020. Publishing weekly live-streamed videos and promoting the ideas of like-minded theorists including Judy Mikovits — a sole source for the factually challenged "Plandemic" video that went viral in May 2020 — Buttar was among anti-vaxxers who waged misinformation campaigns during the COVID-19 outbreak that challenged the news media's portrayal of the pandemic and urged suspicion among followers about nefarious practices by physicians and politicians.

For example, he was among influencers who challenged in videos the CDC's call for restrictions on in-person socializing to limit the spread of COVID-19, despite scientific evidence that the virus spreads via airborne particles when an infected person's sneezes, coughs, or talks. Buttar is also among the YouTubers who have spread the false theory that Microsoft founder Bill Gates is using the COVID-19 pandemic as a pretext to push a mandatory vaccine, and he erroneously said online that a federal bill — H.R. 6666 — would authorize federally administered COVID-19 testing groups to enter homes and force testing against residents' will, and then "take" those who test positive to quarantine sites.

In regards to his claim that the flu shot would make people test positive for COVID-19 even if they did not have the novel virus, flu shots are made one of two ways to build people's immune systems without making them sick, according to the CDC: either from inactive flu viruses, which means they are not infectious, or a single gene from a flu virus. That means since COVID-19 is caused by a coronavirus, SARS-CoV-2, not a flu virus, it is not part of the influenza vaccine-manufacturing process at all and would not be transmitted via flu shots.

In sum, given that finding — as well as the false misrepresentation of the DOD study by anti-vaccine advocates — and the fact that the CDC states a "preponderance" of scientific and medical evidence exists to suggest that the flu vaccine does not affect people's susceptibility to non-flu respiratory viruses, which in 2020 could include COVID-19, we rate this claim "False".

Previous Article
Next Article
Article 22 of 24 in Collection

Centers for Disease Control and Prevention. “Misconceptions about Seasonal Flu and Flu Vaccines.”    Accessed 13 May 2020.