Is This the Florida Shooter in an Antifa Shirt?

In the wake of a school shooting that left 17 people dead in Florida, trolls attempted to stir up division by falsely claiming that the shooter had been photographed wearing a pro-Communist t-shirt. 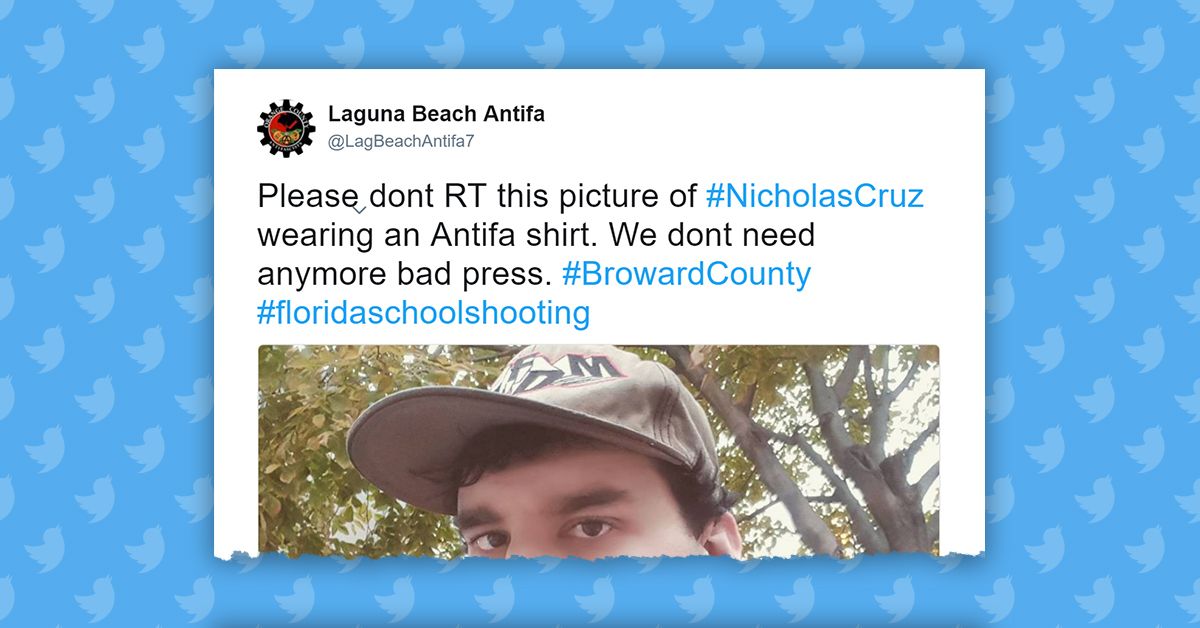 As authorities worked to verify information about the gunman after a 14 February 2018 mass shooting at a school in Parkland, Florida, internet trolls searched for any piece of media (real or fake) they could use to demonize their political opponents. Some such trolls spread a photograph that they claimed showed the gunman, Nikolas Cruz, wearing an "antifa" (anti-fascist) shirt via online forums, blogs, and social media pages. Not only is the man shown in the photograph not shooter Nikolas Cruz, but the t-shirt that person is wearing in the picture has nothing to do with the antifa movement, which has its roots in 1930s anti-fascist movements in Europe.

This image first gained prominence when an impostor Twitter account posing as that of an antifa group from Laguna Beach, California, posted it: The t-shirt in question is not an antifa shirt. It shows images of historical Communist leaders including Josef Stalin, Fidel Castro, Vladimir Lenin, Mao Zedong, and Karl Marx holding solo cups at a party and can best be described as communist kitsch.

The image is also not a genuine photograph of the Florida gunman. Comparing the viral photograph with the Florida shooter's mugshot clearly demonstrates that they are two different people:

The man in the t-shirt appears to be a Facebook user who often posts memes supporting communism. This image likely first gained the attention of the alt-right on 10 February 2018, four days before the shooting, when it appeared on a 4chan thread mocking communism and antifa. Two days later, the image appeared again on a similar thread. This image was reportedly initially posted to the subject's Instagram page, but we have not been able to verify this information as the account has since been set to private. Regardless, Nikolas Cruz is not the man pictured in the viral photograph.

This was far from the only piece of misinformation to spread online in the wake of the Florida school shooting. False rumors holding that Cruz was a DACA recipient also circulated on social media.