Was a Florida Man Arrested for Using Lost Nuke To Power Home?

A routine review of a recycled piece of satire. 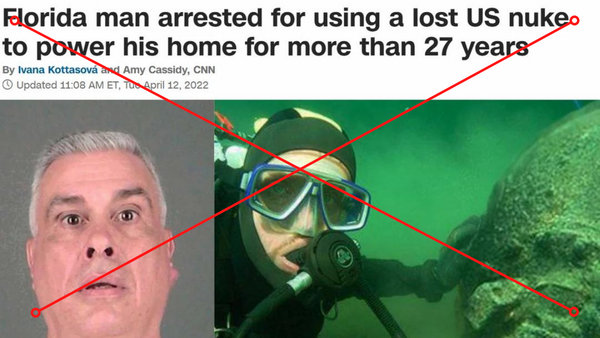 Claim:
A man in Florida was arrested for using a lost nuclear bomb to power his home.
Rating:

In April 2022, a piece of imposter content was circulated online that supposedly showed a news story from CNN about a man in Florida who found a lost nuclear bomb and then used it to power his home for 27 years. This image does not show an article published by CNN, and this story originated as a piece of satire. The above-displayed image appears to have originated with a post on iFunny.com by iFunny_news, an account that admits in its bio to spreading "misinformation on the internets for fun." It was later picked up by a series of obscure websites, such as theancestory.com and 247newsaroundtheworld.com, where it was presented as a credible news story. Some of these outlets added an additional wrinkle to the story, claiming that the man had also been one of those who stormed the U.S. Capitol on Jan. 6, 2021. Some sites even floated the idea that the man had been identified as Cesar Sayoc, the man who was arrested for sending bombs to critics of former U.S. President Donald Trump.

None of this is true. This story is a complete fabrication that originated as a piece of satire published by the World News Daily Report in 2015. In the original version of this satirical story, the WNDR wrote that a scuba diver in Georgia (not Florida) had discovered a long lost nuclear bomb. In fact, we identified this as satire when it was first circulated:

On 12 February 2015, the entertainment web site World News Daily Report published an article claiming that a couple of amateur scuba divers had discovered a long-lost nuclear warhead off the coast of Georgia ... World News Daily Report is an fake news web site that does not publish factual news material. A disclaimer on the site states that all of the information contained therein is for “entertainment purposes only.”

The main photo from the original piece of satire did not show a diver in Georgia discovering a nuclear bomb. That photo was originally published by the German news outlet DW in 2014 in an article about various munitions that were deteriorating in the Baltic Sea. That article did not mention that any of the weapons were nuclear.

When this piece of satire was recycled in April 2022, a second photograph was added that supposedly showed an unidentified "Florida man" who supposedly discovered a nuclear bomb. This photo shows the mugshot of Todd Warnken, a man who was arrested in 2016 on charges of hurling racial slurs at a Black woman while touting Trump. The Guardian wrote:

Warnken threatened to beat a black woman and hurled racial abuse at her outside a grocery store in Albany, New York, during the final weeks of the 2016 election campaign. The woman was waiting for a taxi. “Trump is going to win and if you don’t like it I’m going to beat your ass,” Warnken shouted, according to police. He also told her: “You [racial slurs] had your time. Your eight years are up”. Warnken, 55, was arrested and charged with misdemeanor aggravated harassment.

It's worth noting, too, that this viral meme is an example of "imposter content," a type of misinformation that masquerades as a genuine news. In the case above, this meme was stylized to imitate the look of CNN. This serves two purposes: First, it leads people to believe that this story is genuine, since it is being presented as if it was published by a real news outlet. Second, it fosters a negative perspective of CNN, as people may associate this piece of "fake news" with the news network.

“Violence in the Name of Trump.” The Guardian, https://www.theguardian.com/us-news/ng-interactive/2019/aug/28/in-the-name-of-trump-supporters-attacks-database. Accessed 18 Apr. 2022.