Did Thousands of People in China Witness a Floating City Mirage?

A viral story about a floating city in China suspiciously lacked more proof than a single grainy video or photograph. 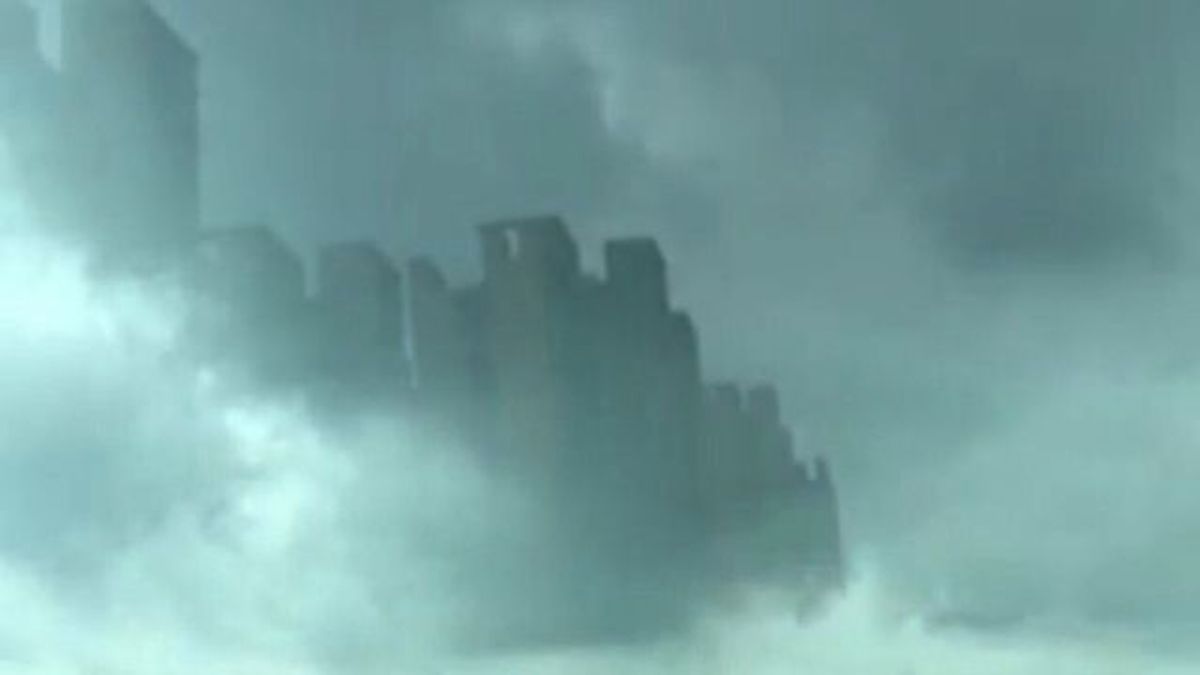 Claim:
Thousands of people in China witnessed a bizarre mirage of a floating city.
Rating:

In October 2015, multiple web sites reported that a rare mirage (known as a "Fata Morgana") had appeared over the city of Foshan in the Guandong province of China at an unspecified-but-recent time. The date of the purported anomaly wasn't referenced in any reports:

This mysterious city scape appearing in the China sky. There was a video of it released today on Facebook. It's allegedly called "fata morgana", or an optical illusion. There's a couple of videos about it on YouTube but this is just flat out bizarre.

Everyone's been talking about it. It's crazy looking:

Footage of the phenomenon appears to show towerblock-like formations over the city of Foshan in the Guandong province of China, apparently bringing many people to a standstill in the street. It reportedly lasted only a few minutes before disappearing,

Experts said the phenomenon, a video of which was shown on Chinese television, was a common optical mirage, according to The Inquisitr ... Online commentator Julie Wagoner said: "In my opinion, CERN, HAARP and Project Blue Beam could all have a little something to do with this. We just never know because the media only tells what the "elite" allow to be told. I am certain there are those of you who know what and who I am referring to when I say, "elite". This is definitely something we will be seeing more of."

A 19 October 2015 entry on the popular web site IFLScience similarly framed the rumor as one involving an event that had in fact occurred, reporting:

Thousands of residents from Jiangxi and Foshan in China reported seeing a "floating city" in the sky earlier this month. The images and grainy video footage appear to show towering skyscrapers poking out of the clouds and looming over the ground below.

Both web sites sourced their information from online reports claiming that the phenomenon had been witnessed by thousands of people, but most of these repetitions lacked very basic details (such as when this eye-catching mirage occurred) or any evidence that even as many as a dozen people saw it. (In fact, no eyewitnesses were identified or quoted across the web.) Moreover, most photographs of the purported "floating city" were sourced not from the thousands of individuals who purportedly witnessed the event, but from a single video published to YouTube on 13 October 2015.

That video (embedded above and titled "Mysterious City Appears in Sky Above China") was shared by the channel "Paranormal Crucible," the "About" page for which reads:

Hi, my name is Marie and I love everything about the paranormal and the bizarre. My video reports may seem a little far out to some people but I am very open minded and believe everyone should have an open mind, especially concerning the paranormal.

The video's specific description claimed the footage was captured by a "local resident" and its events were witnessed "by hundreds" (when that number became "thousands" was unclear, unless we're counting YouTube views). The video shared by IFLScience involved identical still photos of the purported floating city, but it was published to YouTube on 9 October 2015 (and seemingly taken from a Chinese newscast):

Additional reports were published to news sites explaining how a Fata Morgana worked (describing the Chinese event as an example of that phenomenon, often while noting that such optical illusions typically occur immediately above the horizon and not high in the sky) -- but not explaining how a large anomaly in 2015 could be witnessed by "hundreds" (later "thousands") of locals purportedly viewing such a breathtaking event without any of them sharing different images of the mirage to services such Weibo.

All versions of posts about this phenomenon (the most watched of which originated with a paranormal blog) hinged upon the same grainy, Bigfoot-like footage and lacked any detail not visible in the videos.

Finally (like many slightly-too-bizarre claims), rumors indicated the event occurred in China. Owing to significant cultural and linguistic differences, tall tales sourced to that country are often passed off as real-life events occurring there: viewers and readers are less equipped to double-check outlandish claims when their source is a harder-to-translate Chinese language. In the absence of any additional footage or any eyewitness accounts, it's far likelier that the "floating city" in China was just a poorly-vetted rumor than a real rare and stunning optical illusion.