No American Flags Present at the Democratic National Convention

Several right-wing web sites offered the misleading claim that American flags had been banned and were absent from display at the 2016 Democratic National Convention. 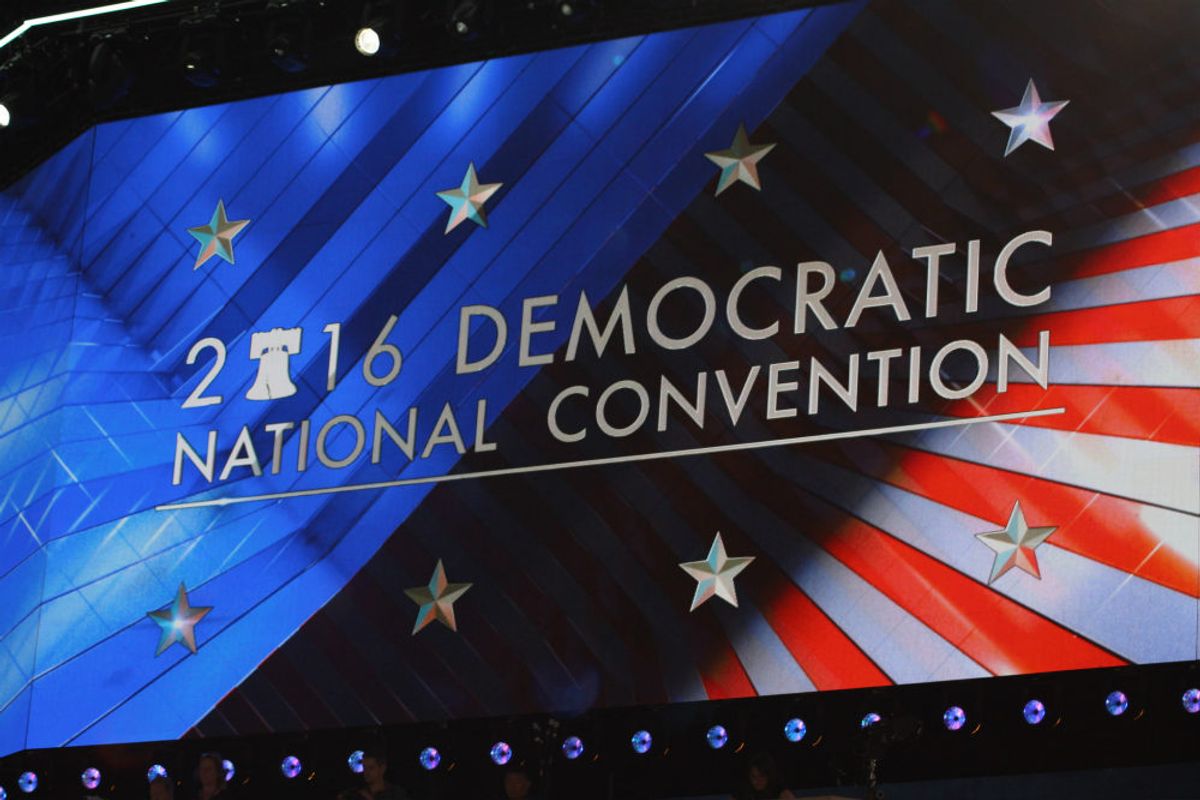 Claim:
American flags were banned from display at the 2016 Democratic National Convention.
Rating:

On 26 July 2016, the Facebook page "Uncle Sam's Misguided Children" posted a photograph purportedly showing the Palestinian flag on display in the audience during the opening day of the 2016 Democratic National Convention (DNC), along with the claim that American flags had been banned at the event because they were "offensive to so many Democrats": Several other right-wing web sites known as purveyors of misinformation, such as The Gateway Pundit, Barenaked Islam, and The Daily Caller also published articles reporting that no American flags were present at the DNC, the latter in a short piece headlined "No Visible American Flags Present at the Democrat Convention":

The Daily Caller is at the Democratic National Convention and it doesn’t look like there are any American flags.

The stage is bland and grey, with no red, white or blue present. A thorough look at the crowd present also turns up no American flags.

In an attempt to further illustrate their point, the Daily Caller presented two news service photographs contrasting Kristen Gillibrand speaking at the DNC with Donald Trump speaking at the Republican National Convention (RNC):

Of course, these images were deliberately misleading, as the staging of both the RNC and the DNC employed large digital displays as backdrops for their speakers. The Daily Caller snagged one shot taken at the DNC when the background screen was displaying something other than flags in conjunction with Gillibrand's remarks, and another shot of Donald Trump speaking in which digital renditions of U.S. flags (not physical flags) were currently on display.

The transition shot below demonstrates that the RNC photograph utilized digital flags:

The digital backdrop at the RNC changed throughout the proceedings, and at times it appeared just as "bland" and flagless as the DNC's supposedly did: Sources making these claims cherry-picked photographs in order to make it appear that no U.S. flags (in either physical or digital form) were on display at the Democratic National Convention. But the Daily Caller, who was supposedly "at the Democratic National Convention" (yet used only news service photographs of the event) must not have looked very hard, as the scene at first day of the DNC exhibited a healthy share of red, white, and blue patriotism, in both digital and physical form: In fact, U.S. flags were present on the stage during the Pledge of Allegiance and the National Anthem, and photographs captured U.S. flags being set up prior to the start of the convention. Flags at stage left were apparently moved or removed at some point (for reasons unknown), but one or more flags were visible at stage right on Day 1: Also, for those tweeting that there was no flag on DNC stage on Monday, here's the flag from Monday. pic.twitter.com/LUZ5SzmBbU

The statement that "a thorough look at the crowd present also turns up no American flags" (or the suggestion that flags had been banned from display among the audience) was also apparently based on some willful blindness, as numerous convention-goers were photographed holding flags and wearing flag-based gear on Day 1 of the convention: When Fox News continued to inaccurately report the lack of flags on Day 2 of the DNC, at least they issued a correction: