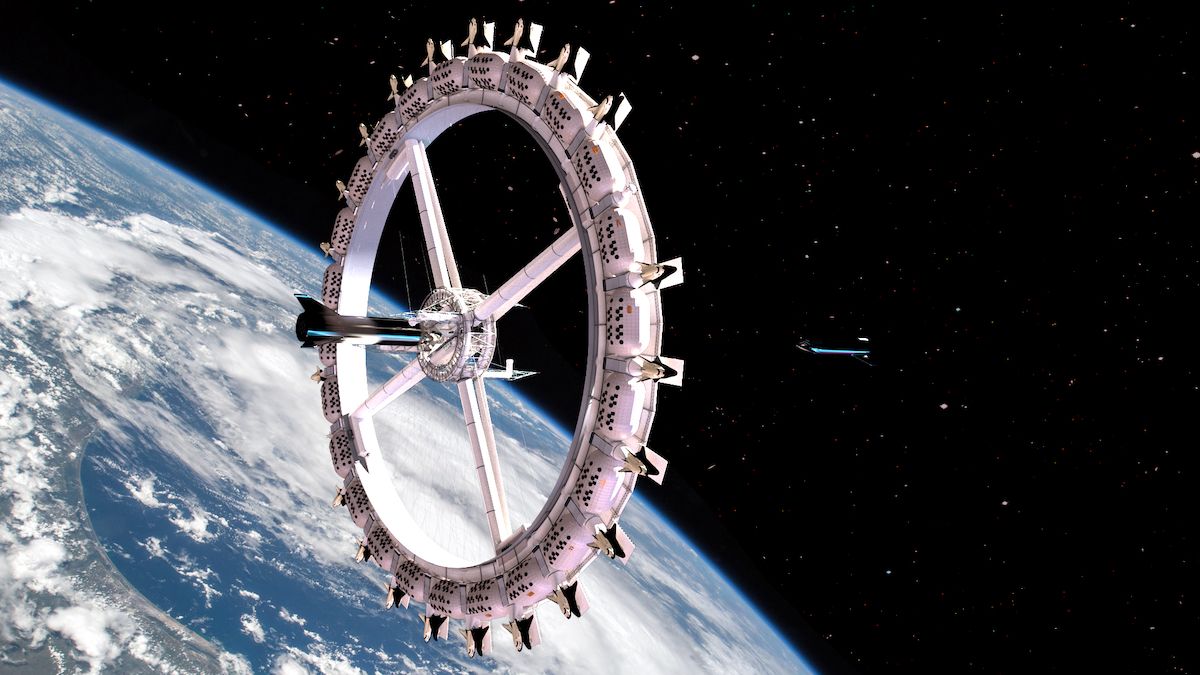 Claim:
The space tech startup Orbital Assembly announced in early 2021 that it was planning to begin construction on the world's first "space hotel" by 2026.
Rating:

In early 2021, a space startup announced plans to begin construction on "the world’s first space hotel" in 2025 with a planned opening set for 2027. However, it is not yet known how feasible the project is or if construction could be completed by the proposed date.

In a Feb. 1 virtual announcement, space tech company Orbital Assembly described its vision for luxury vacations of the future that are “literally out of this world" — priced around $5 million per person. Following a delay caused by the coronavirus pandemic, the company said that it was on track to begin construction on what is deemed to be the world's first "space hotel" by 2026 at the latest. Representatives with the company predict that the commercial Voyager Station will take just a year or two to assemble, putting it on track — if all goes to plan — for an opening around 2027. (By comparison, it took scientists and engineers 10 years and more than 30 missions to finish the International Space Station in 2011.)

The details are outlined in promotional material shared on the Orbital Assembly website. Described as the "world's first large-scale space construction company," Orbital Assembly was soliciting investors and had raised $1 million with a valuation of more than $23.3 million. In 2021, the company was headed by former pilot John Blincow, CEO and President, and Vice President Tom Spilker, a former scientist and engineer at the Jet Propulsion Laboratory.

But let's be clear here: The feasibility of the space station remains largely in question.

Snopes contacted SpaceX to confirm its supposed partnership with Orbital Assembly but did not hear back at the time of publication. In an email from NASA, spokesperson Stephanie Schierholz said that the agency could not comment directly on the feasibility of the project as it does not have insight into the company’s plans, but did offer the following statement:

NASA changed some of its policies about what activities can take place on the International Space Station in June 2019 in our efforts to support a robust low-Earth orbit economy, which includes space tourism. This continues NASA’s efforts toward commercialization that began when NASA contracted with commercial companies to deliver cargo to the space station and is continuing with our commercial crew program in which NASA has contracts with Boeing and SpaceX to fly astronauts to space. Part of NASA’s goals were that we not be the only customer for those services, that the companies can expand who has access to spaceflight.

“As a first step, NASA has awarded Axiom Space a contract to provide at least one habitable commercial module to be attached to the space station,” she wrote.

International permits and filing requirements needed for a private company to launch a commercial endeavor in space are issued by the Federal Aviation Administration (FAA). The agency is responsible for ensuring the protection of the public, property, and national security and foreign policy interests of the United States during commercial launch or reentry activities, and to encourage, facilitate, and promote U.S. commercial space transportation. And the training of guests will be left up to the commercial providers to determine.

Future space guests would supposedly be required to make a reservation and undergo physical and safety training before renting — or buying — a 5,300-square-foot villa complete with cooking facilities, three bathrooms, and sleeping accommodations for up to 16 people. According to the company website, villas can be booked for a week, rented for a month, or purchased as a vacation home. Smaller hotel suites will also theoretically be available for a three-day trip or monthlong rental and come with a private bathroom and sleeping accommodations for up to two people.

Voyager Station is hyped in promotional materials as a rotating station designed to produce varying levels of artificial gravity. Guests would be transported from Earth via the SpaceX Starship shuttle. Designed to accommodate 280 guests and 112 crew members, the station will be designed in three phases and will eventually feature a gym, restaurant, cinema, and sky bar.

"Voyager Station will leverage the technologies of space and the comforts of Earth to create a unique experience unparalleled in history," wrote the company on its website. "Simulated gravity will offer amenities like toilet facilities, showers, and beds that function similar to what you are used to on Earth."

Each facet of the hotel would be added as a module sort of like LEGO pieces. The Gymnasium and Activity (GA) module, for example, would feature a large recreation hall with 23-foot ceilings for "jumping, running, and playing sports in the one-sixth Earth gravity environment," while the lower-level gym would be equipped with weights and treadmills so users could "work out while watching the Earth and stars rotate below." Don't fancy working out? The company said that the GA will transform into a concert venue at night where the "biggest musicians on Earth will rock the station" — none of whom have yet been announced.

But just because construction is slated to happen doesn’t necessarily mean it will. As Gizmodo pointed out, such futuristic space hotels have been promised for the last six decades — and none has yet been delivered.

March 11, 2021]: Article was updated to include comments from NASA.