Did a First Lady Wear a $46K Dress to an Inaugural Ball?

An online advertisement featured a lineup first ladies and hinted that one of them once wore a $46,000 dress on Inauguration Day. 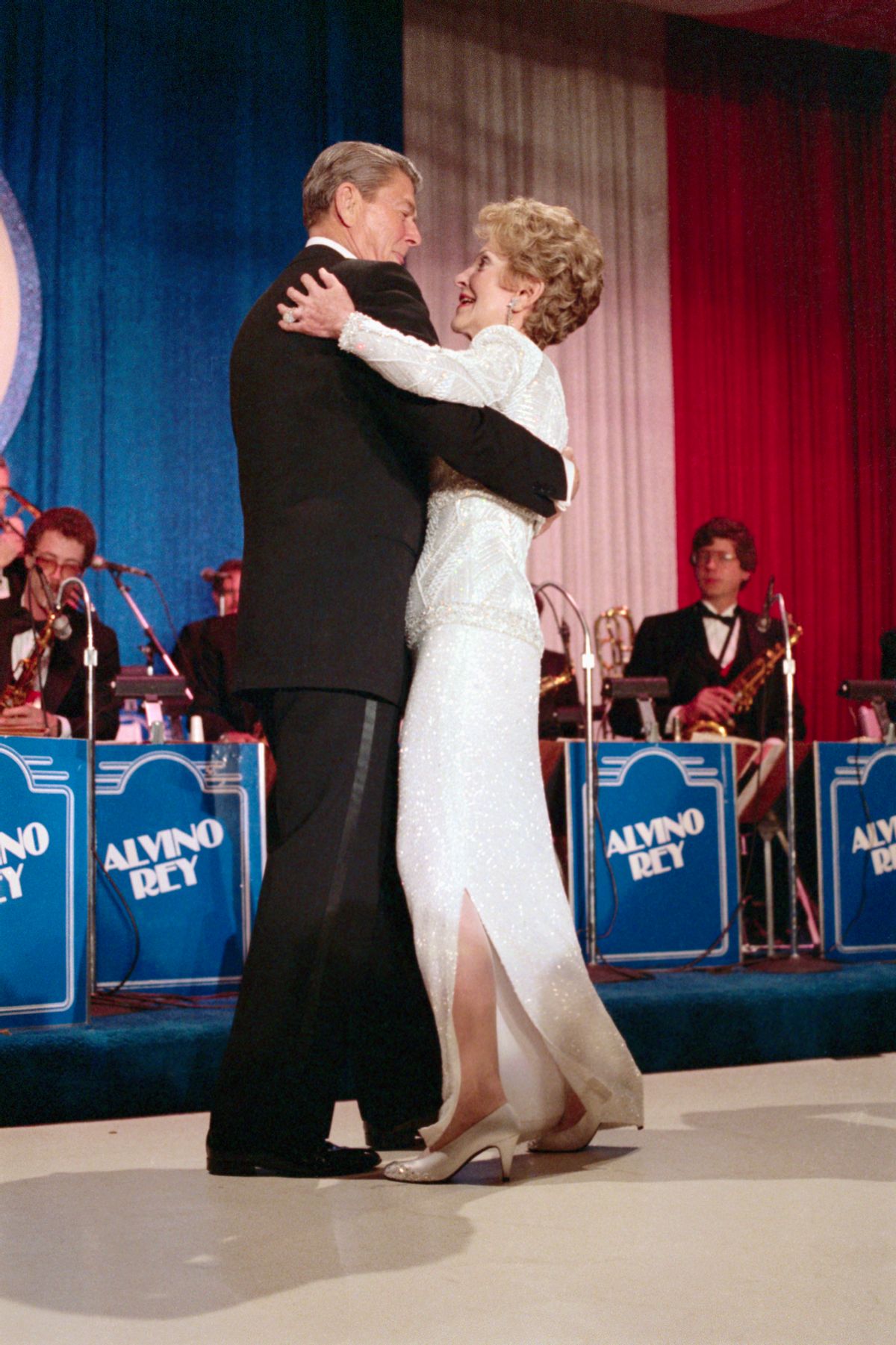 (Original Caption) President and Mrs. Reagan enjoy a dance at the Inaugural Ball at the Sheraton Washington Hotel. (Image Via Bettmann / Contributor)

Claim:
A former first lady wore a dress estimated to be worth $46,000 to an inaugural ball.
Rating:

First lady Nancy Reagan wore several dresses and gowns to former U.S. President Ronald Reagan's second inaugural festivities that would have retailed for a total of $46,000.

However, a single dress or gown worn by Nancy Reagan did not alone cost $46,000. Further, in 1985, The Washington Post reported that while the first lady's wardrobe for the inauguration might have totaled $46,000 at retail, the price may have been "adjusted by the designers because of the exposure given their designs when she wears them."

The inauguration of President Joe Biden and Vice President Kamala Harris was a day unlike any the United States had seen before. Safety concerns regarding the COVID-19 pandemic and the recent attack on the Capitol led to a number of changes for the Inauguration Day schedule.

For example, the inaugural ball was canceled. Past inaugural balls included a first dance for the president and first lady, and that a special wardrobe is traditionally chosen by each first lady. According to an online advertisement, one first lady purportedly spent an estimated $46,000 on one dress: The ad featured pictures of Nancy Reagan, Hillary Clinton, Jacqueline Kennedy Onassis, Michelle Obama, and Melania Trump. Readers who clicked the ad were led through 55 pages of pictures and details in a lengthy slideshow story with the headline: "First Ladies’ Fashion Over The Years." Some first ladies were featured on multiple pages. Nancy Reagan was one of those women:

After [Ronald] Reagan was elected for a second term, Nancy wore the designer Galanos and the gown was again white, only this time it was outfitted with long sleeves. Allegedly, the designer and staff spent over three hundred hours hand placing beads onto the gown. The gown cost an estimated $46,000!

It was true that, in 1985, the first lady wore a wardrobe to Ronald Reagan's second inauguration that would total, at retail, for $46,000. However, it was misleading to claim that Nancy Reagan's inaugural ball dress alone cost $46,000. Further, Nancy Reagan's dress featured in the advertisement picture was from 1981, not 1985.

The Washington Post reported in 1985 that "the actual price paid by Mrs. Reagan is a private matter, adjusted by the designers because of the exposure given their designs when she wears them." However, the Post looked to industry sources and confirmed that "the costs, at retail, for the clothes Mrs. Reagan plans to wear to the major inaugural festivities, excluding some accessories, would be $46,000."

The Reagan White House declined to comment to the Post about the amount paid for the first lady's inaugural ball dress and other products. However, the Post's reporting included a breakdown of what it would have cost to purchase Nancy Reagan's dress and other accessories at retail:

A totally beaded gown with Art Deco design and bolero effect by James Galanos, $22,500. The Austrian and Czechoslovakian glass beads, took more than 300 hours to apply by hand, the designer said last week. An electric blue matching coat and dress, each with a chain link belt, by Adolfo, $2,800. The designer has also made a roller-brimmed hat in the same blue to wear with the costume. (The designer is lending Mrs. Reagan link earrings and necklace to wear as well.) Jan. 21, 1985: Ronald and Nancy Reagan with George and Barbara Bush at the public inauguration of President Reagan and Vice President George Bush at the Capitol Rotunda for their second terms in office.

A lacquer-red, heavy silk side-draped gown by Bill Blass to be worn to the gala, $3,000. The gown is similar to a dress Blass is offering his customers for spring. In addition, Mrs. Reagan has also ordered a white double-faced wool coat with three jeweled buttons that close off to the side to wear over the white gown, $6,000; and a white mink blouson jacket, also a Galanos design, $10,500.

A red wool jersey wrap, made especially to go over the red dress worn to the gala, $1,000.

A twisted pearl chocker and earrings by Kenneth Jay Lane to wear with the red dress $200. (Actually, the designer made two necklaces to give Mrs. Reagan a choice.)

This $46,000 total does not include specially handmade shoes or other accessories to complete each outfit.

In sum, Nancy Reagan's wardrobe for her husband's second inauguration might have totaled $46,000 at retail, but that was not the price for a single dress or gown. Further, prices may have been reduced for the exposure the first lady brought to the designers.

This was far from the first time that women in politics were criticized, perhaps unfairly, for their wardrobe choices.

As with Nancy Reagan's supposed $46,000 wardrobe for dresses, gowns, and accessories, the prices for clothing worn by other women in politics may also have been purchased at reduced prices because of the exposure they brought to designers.