An old urban legend about Chinese food made from aborted fetuses or unwanted babies resurfaced, this time alongside a gruesome picture. 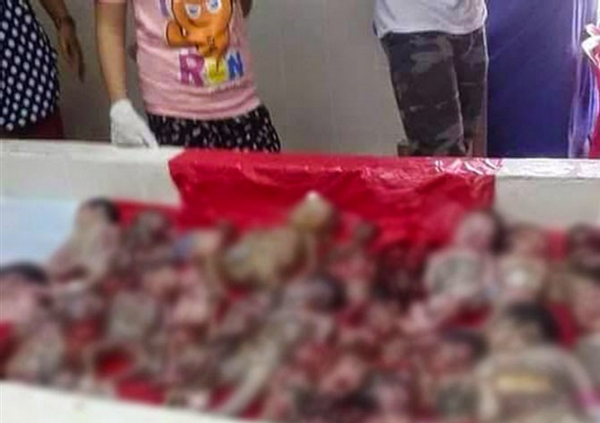 In February 2016, social media users started to share the graphic image and caption below (many in the popular "type amen" manner of coercing online engagement:)

These babies were found in a chinese restaurant in the city of douala/ cameroon. In a refrigerator , to the best soup,...

The image was captioned:

These babies were found in a chinese restaurant in the city of douala/ cameroon. In a refrigerator , to the best soup, cruelty without mercy. Be careful with chinese dishes.

Versions of the "fetuses found in a Chinese restaurant freezer" story had already been circulating for several months, and the claim seemed to be a spinoff of an early piece of internet lore about soup in China made from fetuses or babies (which originated from a piece of performance art).

Although the photograph's explanation was mostly inspired by the older story, its circumstances appeared to be linked to a separate instance of miscaptioning. In February 2016, a photograph circulated alongside claims that it showed fetuses discovered in a dumpster outside an abortion clinic in Michigan. The image actually dated back several years to a discovery of fetuses in a river in Nepal. The earliest dated instance of the image was on a forum called "Documenting Reality", which specializes in gore and death photos:

A trash bag full of dead babies/fetuses were found by authorities in Thailand. They suspected the bag was dump by an illegal abortion clinic.

No further information was offered about the image or its circumstances, but neither did that earliest appearance include any mention of Chinese food or meat markets. The image was very likely one of several taken following the discovery of 2,000 fetuses in a temple in Thailand in 2010, which, according to news reports, were hidden at the temple by abortion clinics that were operating illegally in the country:

The police have arrested two undertakers and a woman who confessed to delivering fetuses to the temple from several clinics. She said she was paid as much as 500 baht, about $16, per delivery and that she paid the undertaker as much as 200 baht to dispose of them. Buddhist cremations are generally performed at temple crematoriums.

The woman also said she had performed illegal abortions and was raising eight children who had survived the procedure, according to local newspaper accounts.

Explaining her adoption of these children, The Nation newspaper quoted her as saying she rescued them after failed abortions because “if the kids won’t die, there’s no need to kill them.”

The case has been a sensation in the local press and has led to calls for stronger laws controlling abortion, which is legal only in cases or rape or incest or if the mother’s life is in danger.

However, upon its first appearance, no one claimed the image showed the sale of fetuses or babies for food preparation. That claim was one of several Western rumors that supported the idea that attitudes about life and death were far more cavalier in China or other Asian countries, a trope that was extremely common (and appeared to be a tacit moral judgment levied by Westerners).