Did Feminists Burn Their Bras in Protest at the 1968 Miss America Pageant?

The 1968 Miss America pageant supposedly spawned a decade of bra-burning by feminists as a means of calling attention to their cause. 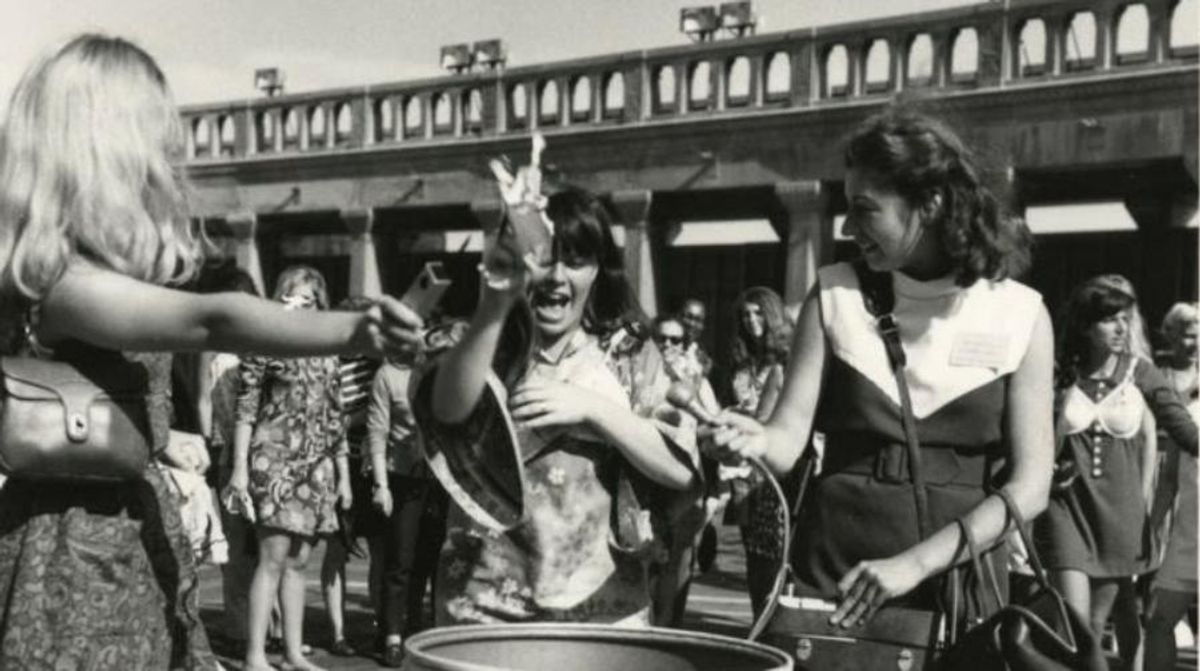 Claim:
The 1968 Miss America pageant spawned a decade of bra-burning by feminists as a means of calling attention to their cause.
Rating:

During a demonstration by feminists at the 1968 Miss America pageant, some bras -- along with numerous other items -- were burned when a trash receptacle was briefly set alight.

The feminists did not stage a protest in which they pointedly and specifically burned bras alone as a symbol of liberation.

One of the strongest images we've incorporated into our stereotype of the militant feminist is a mental picture of her ripping off her brassiere and flinging it onto a bonfire as a way of signifying a shucking of the yoke of male oppression. This memory is constantly reinforced by numerous references in popular culture to bra-burning feminists, and it has thus been carried forward from a previous generation into this current one. So entrenched is this mental image that folks rarely question its validity, instead accepting it as unchallenged fact.

In the late 1960s, radical feminists began using rhetoric and protest tactics as a way of indelibly imprinting their message on the public. They staged dramatic and at times deliberately provocative demonstrations (which they called "zap actions") to focus attention on women's need for liberation. The first and most famous of these stagings occurred at the 1968 Miss America beauty pageant when a small group of women picketed the pageant with signs proclaiming, "Let's Judge Ourselves as People. They crowned a live sheep, and they dumped bras, girdles, curlers, false eyelashes, wigs, and issues of women's magazines into a "freedom trash can" while the cameras clicked.

The image of brassieres going into a trash can was captured in a memorable photograph, along with some print references to bra-burning, which melded into not-so-accurate memories now so seemingly vivid in recall. Contemporaneous reporting indicates that some bras did burn at least briefly when a trash receptacle was set alight, but that trash can contained numerous other items as well -- there was no reported separate or distinct action of feminists' pointedly setting bras alone ablaze as a defiant symbol of liberation:

[A] brigade of 75 women identifying themselves as a "women's liberation group" staged a two-hour demonstration protesting the image of Miss America.

[T]he demonstrators, ranging in age from 18 to 68, and carrying placards blasting the ideal of Miss America and the pageant method of judging ... climaxed their demonstration by discarding bras, high-heeled shoes, and other items ...

As the bras, girdles, falsies, and copies of popular women magazines burned in the "Freedom Trash Can," the demonstration reached the pinnacle of ridicule when the participants paraded a small lamb wearing a gold banner worded "Miss America."

Prior to 1992, it was generally assumed the "bra burner" story was the work of a sensational male-dominated press happy to use most anything to trivialize what those dissatisfied gals in Atlantic City were on about. But in that year's September issue of Ms., contributing editor Lindsy van Gelder confessed that she herself, as a young reporter for the New York Post, asserted that she had given the tale its start.

Sent to do a humor piece on the demonstration, van Gelder attempted to turn her assignment into a vehicle for showcasing the validity of the movement by linking it to the Vietnam War protests which, unlike the women's liberation protests, were at least being taken seriously by the press. She made reference to (hypothetical) bra-burning as a way of piggybacking the zap actions at the Miss America Pageant onto the established credibility of the draft resistance movement through implying by suggestion that if young American men were burning their draft cards in protest over being oppressed, then young American women were burning their bras in protest of the same evil (albeit in their case perpetrated by a different oppressor).

The scheme backfired. The headline writer quickly picked up upon the possibilities of braless feminists, and "bra burning" made it into the headlines. The "draft card" nuance van Gelder had been striving for was immediately lost (though it probably would have sailed over any number of heads anyways), swamped by the mental imagery of braless feminists screeching slogans and waving signs as they angrily demanded to be taken seriously.

The status of this page was changed to 'MIXTURE' to accommodate additional information about contemporaneous reporting of the event.