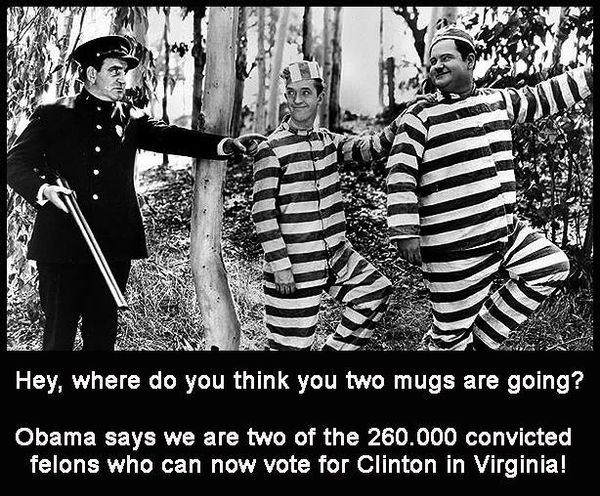 The number of people re-enfranchised was not estimated to be 260,000; President Obama was not involved in the governor's decision.

Governor Terry McAuliffe today restored the voting and civil rights of more than 200,000 Virginians who were convicted of felonies, served their time and completed any supervised release, parole or probation requirements. Each of those Virginians will immediately regain the right to register to vote, to run for office, to serve on a jury and to serve as a notary public.

“Throughout my administration my team and I have operated on a simple principle: Virginians who have served their time and reentered society should do so as full citizens of our Commonwealth and country,” said Governor McAuliffe. “Too often in both our distant and recent history, politicians have used their authority to restrict peoples’ ability to participate in our democracy. Today we are reversing that disturbing trend and restoring the rights of more than 200,000 of our fellow Virginians who work, raise families and pay taxes in every corner of our Commonwealth.”

The Governor implemented his action by signing an order restoring the rights of every Virginia felon who completed his or her sentence and all other requirements as of April 22nd, 2016. The total number of Virginians impacted by the Governor’s order today is 206,000. He also instructed the Secretary of the Commonwealth to prepare a similar order monthly in order to restore the rights of individuals who complete their sentences in the future.

Article V, Section 12 of the Constitution of Virginia grants the Governor the authority to “remove political disabilities consequent upon conviction” of a felony.

Previous to today’s action, the McAuliffe Administration restored the rights of more than 18,000 Virginians, which is more than the past 7 governors combined over their full four-year terms.

The New York Times' editorial board described McAuliffe's executive action as "historic," comparing it to other states' restrictions on felony convictions and voting:

In a major executive order, Gov. Terry McAuliffe of Virginia on Friday restored voting rights to more than 200,000 people who have completed their sentences for felony convictions. Virginia was one of four states, along with Iowa, Kentucky and Florida, that placed a lifetime bar on voting for anyone convicted of a felony. All other states except Maine and Vermont impose lesser restrictions on voting by people with felony convictions.

To people who have served their time and finished parole, Mr. McAuliffe said in a statement: “I want you back in society. I want you feeling good about yourself. I want you voting, getting a job, paying taxes.” It is the largest restoration of voting rights by a governor, ever.

Felon disenfranchisement laws, which currently block nearly six million Americans from voting, were enacted during the Reconstruction era in a racist effort to make it harder for newly freed African-Americans to vote — a reality Mr. McAuliffe acknowledged on Friday. “There’s no question that we’ve had a horrible history in voting rights as relates to African-Americans — we should remedy it,” he said. In Virginia, one in five blacks have until now been unable to vote because of a felony conviction.

The decision came during an already contentious election year. Because of that, many reports circulating on social media were editorial in nature, leading some to misunderstand the specifics of the new law. Several misinterpreted the numbers, asserting that 260,000 felons in Virginia were given the right to vote, or that the measure somehow involved President Obama: It is true that Virginia's governor signed an order on 22 April 2016, which restored the voting rights of approximately 200,000 convicted felons throughout the state. However, the number of Virginians affected was not 260,000, and President Obama was not in any way involved with the order.