More than 100 million food aid boxes were distributed across the United States in 2020 in response to the Coronavirus pandemic. 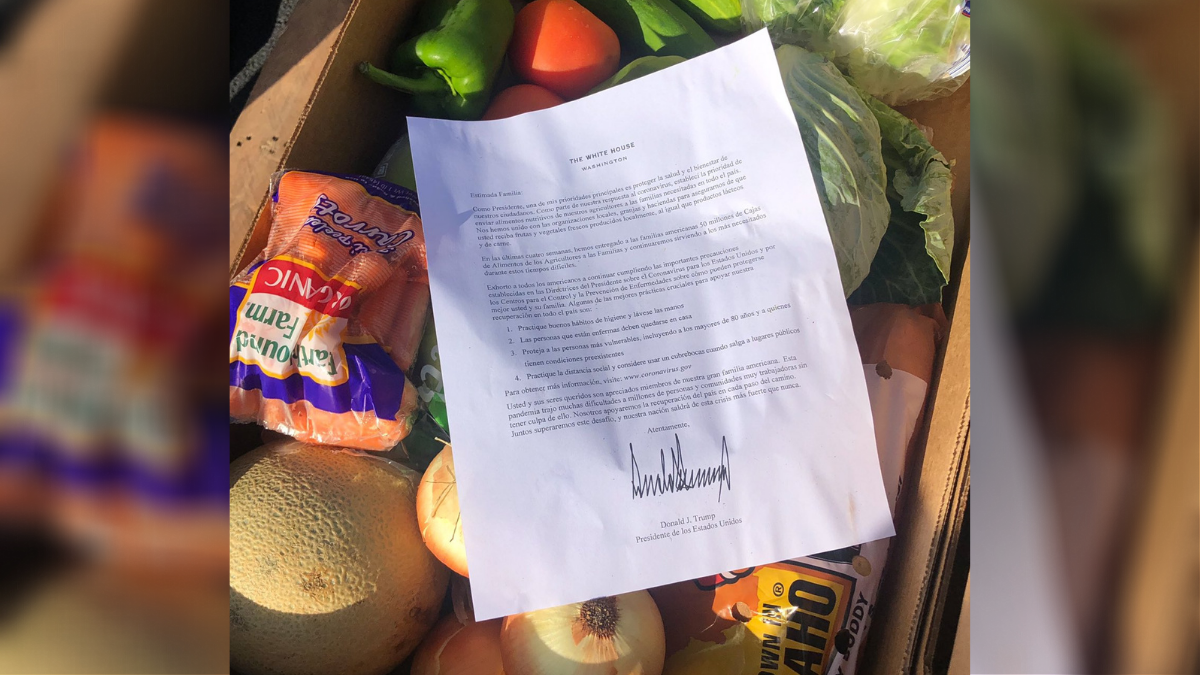 Claim:
In late September 2020, the U.S. Department of Agriculture distributed millions of federally funded aid boxes that included a letter from President Donald Trump crediting his administration for their distribution.
Rating:

Letters written on behalf of U.S. President Donald Trump and printed on White House letterhead were included in millions of federally funded food aid boxes distributed across the nation to families in need, sparking controversy over whether the move violated federal law prohibiting certain political activities by U.S. federal employees.

In response to growing concerns over the coronavirus pandemic, the Trump administration launched the Coronavirus Food Assistance Program. That program gives the U.S. Department of Agriculture (USDA) authority under the Families First Coronavirus Response Act to purchase agricultural products from American vendors and transport the products in "family-sized boxes" to food banks and other aid organizations for distribution to families in need. As of Sept. 29, 2020, U.S. Secretary of Agriculture Sonny Perdue announced that more than 100 million of the government-funded boxes had been distributed across the country through the Farmers to Families Food Box Program.

Included in millions of these aid boxes were letters purportedly written by Trump crediting his administration for their distribution. Both English and Spanish versions of the letters reportedly were included in the boxes, which read the following:

As President, safeguarding the health and well-being of our citizens is one of my highest priorities. As part of our response to the coronavirus, I prioritized sending nutritious food from our farmers to families in need throughout America. We are partnering with local organizations, farms, and ranches to ensure that you receive locally-sourced fresh fruits and vegetables as well as dairy and meat products.

The letter went on to refer readers to the president’s coronavirus guidelines. A full version of the letter had been uploaded to a document cloud by ProPublica, a nonprofit news publication. It is unclear whether the letters were mandated by the USDA or by the president himself. Snopes contacted both the federal agency and the White House but did not receive a response at the time of publication.

Fox News first reported in July that the letters were to be included in some boxes beginning in Summer 2020 and credited the idea to White House adviser — and daughter to the president — Ivanka Trump, who tweeted a photo of the letter in food boxes on Aug. 14. The White House letter was touted in an Aug. 24 news release that claimed Trump “swiftly launched” the Farmers to Families Food Box program with his administration’s purchase of $3 billion in produce, dairy, and meat for families in need, and had approved an additional $1 billion for the program.

"In addition, President Trump is including a letter that reinforces COVID-19 safety guidelines and how Americans can best protect themselves and their families," read the news release.

Democratic lawmakers argue that the letter violates the federal Hatch Act, which prohibits federal employees from using taxpayer resources to campaign or engage in other electioneering activities. While the president himself, who is up for reelection, is exempt from the law, the law does apply to White House staff, such as Ivanka Trump, and federal agencies like the USDA. Rep. Marcia L. Fudge, D-Ohio, and dozens of other congressional members signed an Aug. 14 letter in response to the inclusion of the letters in federal aid boxes:

Using a federal relief program to distribute a self-promoting letter from the President to American families just three months before the presidential election is inappropriate and a violation of federal law. We strongly urge you to end the practice immediately,” wrote the members.

A public health crisis is not an opportunity for the administration to promote its own political interests. Likewise, a federal food assistance program should not be used as a tool for the President to exploit taxpayer dollars for his re-election campaign.

The authors of the congressional letter requested further information regarding the details of the letter, any associated costs, and who required its inclusion by Aug. 31. Snopes contacted Fudge’s office to confirm whether she had received a response from the agency and if so, what information was included. We will update this article accordingly if we hear back.

Roberts, John and Alex Pappas.   "Trump to Include Letter on Coronavirus Guidelines in Food Delivery Program For Those in Need."     Fox News.   31 July 2020