Did the FDA Change Packaging Laws Because of the Blue Bell Ice Cream Licker?

Such a move would have been an impossibly fast reaction by an agency whose rules must go through multiple levels of review and public comment before implementation. 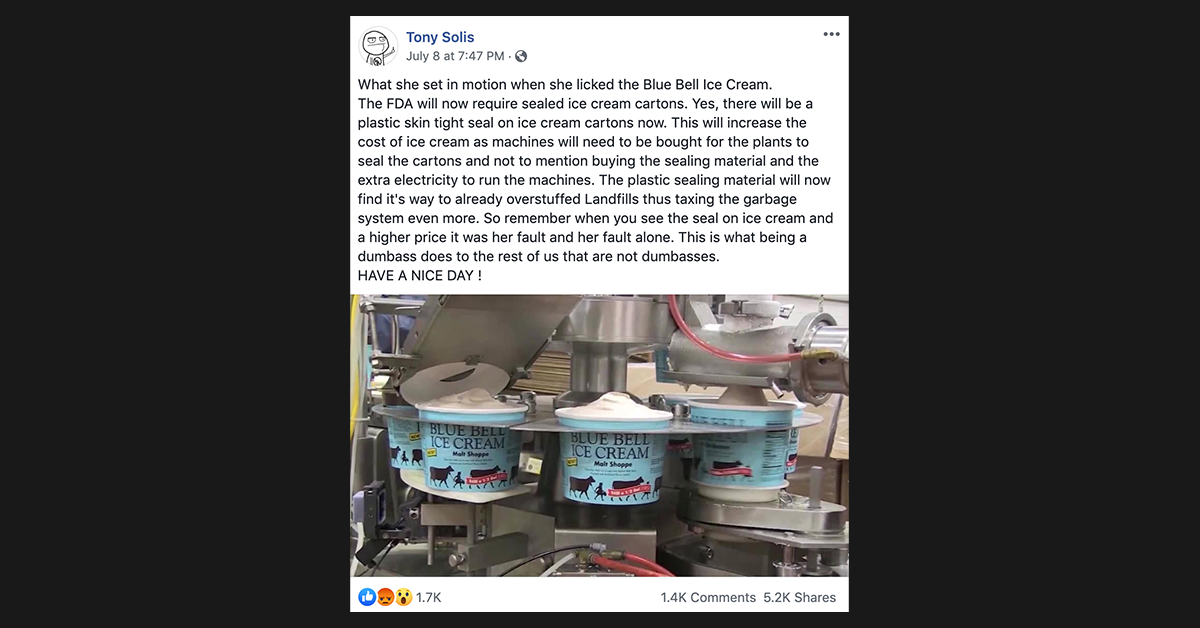 Claim:
The U.S. Food and Drug Administration is changing their regulations to require plastic seals in ice cream packaging in response to the “Blue Bell ice cream licker.”
Rating:

On June 28, 2019, the internet’s collective fury became laser-focused on a woman shown in an Instagram video removing the top of a Blue Bell ice cream tub, licking the creamy surface, and returning the product to the Walmart freezer from which it came. By early July the perpetrator seen in the video had been identified and arrested, and in an emailed statement to the New York Times, Blue Bell announced they had identified a Walmart store about 120 miles northeast of Houston “as the store where the malicious act of food tampering took place.”

Shortly afterwards, a well-shared Facebook post alleged massive collateral damage from this reviled stunt, suggesting the perpetrator's antics had led to a change in packaging regulations at the Food and Drug Administration (FDA): Those claims were complete fiction. We reached out to the FDA to ask if the Blue Bell incident had led to any regulatory changes, and in response spokesperson Peter Cassell told us the viral claims were “not accurate” and that the FDA does not now require plastic packaging on ice cream as a result. “The issue that sparked this [rumor] is a matter for local law enforcement at one retail location,” said.

Indeed, it would have been virtually impossible to pass a regulation change so rapidly, given that FDA rule changes must be formulated in detail, published publicly, and made open for a period of public comment before they can be implemented.