A famous photograph commonly referred to as "Heaven's Trail" wasn't taken in Ireland and does not depict a biennial astronomical event. 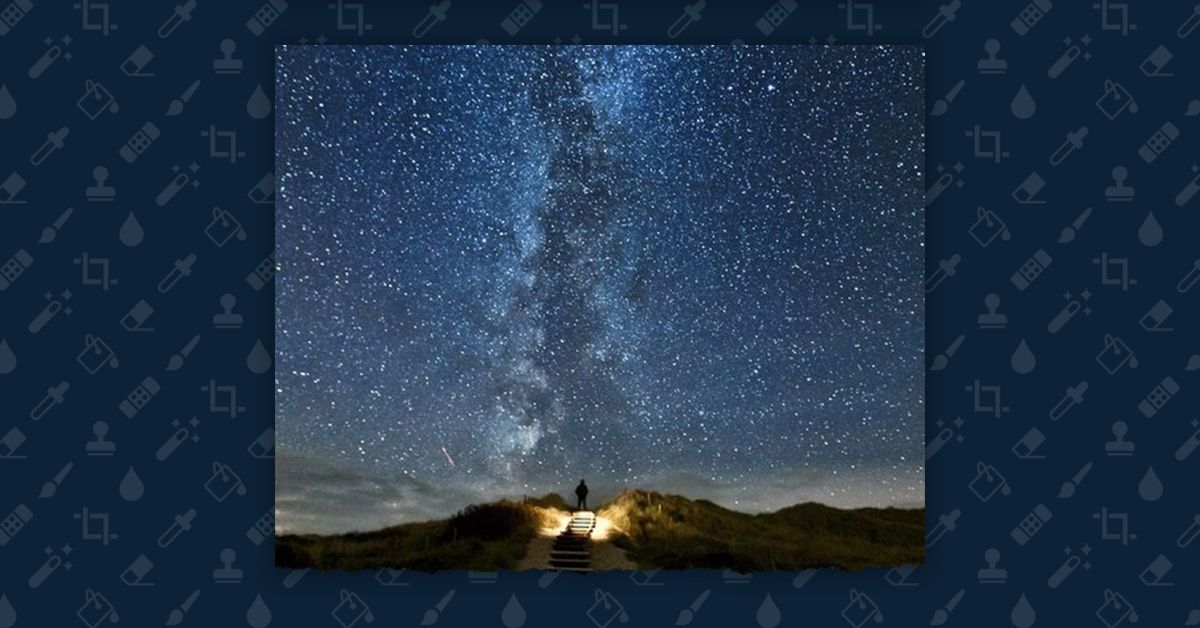 A photograph purportedly depicting a man standing at the base of "Heaven's trail" in Ireland has been circulated on the Internet since at least 2011. While the image has seen various backstories attached to it over the years, the most common iteration goes like this:

There’s this place in Ireland where every 2 years, the stars line up with this trail on June 10th-June 18th. It’s called the Heaven’s Trail. According to photographer Thomas Zimmer, this picture was taken not in Ireland but on Sylt (an island in northern Germany), and it was not snapped during a biennial event occurring in June but rather in November around sunset:

It was at the west coast of the island Sylt, North Sea. It was November and sunset was at 4:30pm. There was no moon at this time and later on the milky way appeared in its glory. I shot until I was literally unable to use my fingers any more. Stupid me, I forgot my gloves. Finally, I decided to leave the place. Batteries were nearly empty, I was hungry and frozen. So I packed the camera stuff, and made my way back to the car, which was a long walk in the dark.

"At that time it was pitch black. I walked over the dunes and took the wooden stairs down. I took a last look back. An amazing view showed up. The Milky Way was right above the stairs. But I was so exhausted, hungry and cold. I almost wanted to give up, but then I made a last effort, and tried a final shot."

Even if Zimmer's photograph wasn't taken during a rare June event in Ireland, it is nonetheless a real image. Of course, it took a little post-processing, a serendipitous location, and a happy accident to achieve, as Zimmer explained in a blog post on 8 September 2012. The photographer was trying to light up the wooden steps seen in the image with a flashlight when he realized that the photo would turn out better if a person were standing atop the steps. So he set the self-timer on his camera and ran up the path, and it wasn't until he got home afterwards that he realized his camera shutter had opened while the flashlight in his hand was still alight:

It was a mistake. But it was a beautiful one:

It looked good, but something was missing there. I first tried to light up the stairs with the flashlight. Looked better, but not what I wanted. It needed a human being in the image. Unfortunately, nobody was there for miles except me. So I set up the self timer, fired it and ran up the stairs with the flashlight on. On top, I shut off the light and tried to stand still for 30 seconds, the exposure time.

I did not notice that the shutter opened while I was running with the flashlight on. So the final photo had the last stairs illuminated. Later on, in the hotel room, I noticed my fault. But it looked good. The light lead the viewers eye to the small person under the stars. At that time I had the strong feeling that I've got something very special.

Zimmer also admitted that he did some editing to the image (e.g., adjusted color temperature, added noise reduction, brightened the stars, etc.) in order to achieve the photograph's unique look. Still, he insists that there is nothing too special about the picture. In fact, he challenged other photographers to go out and shoot their own "heaven's trail" photo:

So the answer to the initial question is: there is no special photoshop magic in it. It's a photo, nothing else. Maybe a good one. The raw file looks pretty much the same. You can go out and do something similar. Maybe today night is a good time for you to start? Go out, shoot.

One last thing should be noted about this photograph. While the photo is often referred to as the "Heaven's Trail" photo, Zimmer's title for his shot is "My God, it's full of stars" (a line from Arthur C. Clarke's 2001: A Space Odyssey novel).