Dr. Anthony Fauci said his comments in a campaign ad for President Trump were taken out of context. 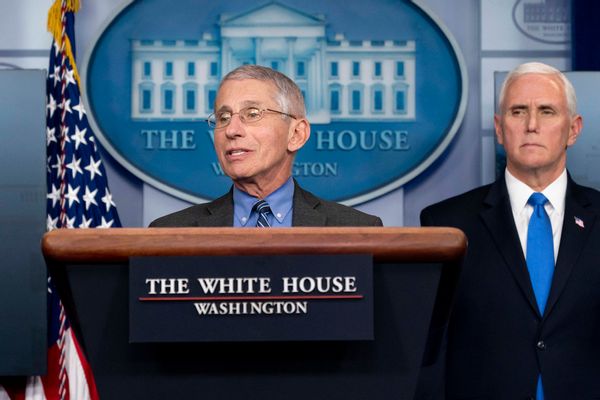 However, the included quote was presented out of context. Fauci was talking about the hard work of various members of the COVID-19 task force — not specifically Trump — when he made this remark. He spoke in March 2020 when there had only been 300 U.S. deaths related to COVID-19. By the time the ad aired in October, there had been more than 210,000 deaths.

In October 2020, a campaign ad for U.S. President Donald Trump that supposedly showed Dr. Anthony Fauci, the director of the National Institute of Allergy and Infectious Diseases (NIAID), praising the president's handling of the COVID-19 pandemic started circulating online:

The narrator in the video says: "President Trump tackled the virus head on, as leaders should." The video then cuts to Fauci and shows him saying: "I can't imagine that... anybody could be doing more."

Fauci, however, was not specifically referring to Trump in this remark. It should also be noted that this comment, which was primarily aimed at the members of the COVID-19 task force, was made in March — seven months prior to the first airing of this ad. When Fauci made this comment, there had only been about 300 deaths in the United States related to the coronavirus. When this video first aired in October, there had been more than 210,000 deaths.

The video clip of Fauci in this campaign ad was taken from an interview the NIAID director gave to Mark Levin on the Fox New Channel show "Life, Liberty & Levin" in March 2020. When Fauci was asked about the administration's response to COVID-19, he responded by praising the members of the task force for their tireless efforts.

Here's a transcript of Fauci's remarks. We bolded the portion included in the campaign ad:

MARK LEVIN: Welcome back. Dr. Fauci, let me ask you a question. You've been doing this a long time. Have you ever seen this big of a coordinated response by an administration to such a threat? A health threat?

DR. ANTHONY FAUCI: Well, we've never had a threat like this and the coordinated response has been, there are a number of adjectives to describe it. Impressive, I think is one of them.

I mean, we're talking about all-hands on-deck is that I, as one of many people on a team, I'm not the only person, since the beginning that we even recognized what this was. I have been devoting almost full time on this -- almost full time.

I'm down at the White House virtually every day with the Taskforce. I'm connected by phone throughout the day and into the night and when I say night, I'm talking twelve, one, two in the morning. I'm not the only one. There's a whole group of us that are doing that. It's every single day.

So I can't imagine that that under any circumstances that anybody could be doing more. I mean, obviously, we're fighting a formidable enemy — this virus. This virus is a serious issue here.

Fauci did not mention Trump by name in his response to Levin's question. Fauci did, however, specifically mention the "task force," and the "team" of people who were working around the clock to combat the COVID-19 pandemic.

Shortly after Trump's campaign ad aired in October 2020, Fauci released a statement saying that his comments were presented out of context and that he never gave permission to be included in a political ad. Fauci said in a statement:

"In my nearly five decades of public service, I have never publicly endorsed any political candidate. The comments attributed to me without my permission in the GOP campaign ad were taken out of context from a broad statement I made months ago about the efforts of federal public health officials."

Murtaugh said: "These are Dr Fauci's own words. The video is from a nationally broadcast television interview in which Dr Fauci was praising the work of the Trump administration. The words spoken are accurate, and directly from Dr Fauci's mouth."

While these are words from "Fauci's mouth," they were misrepresented in this campaign ad.

Schwartz, Ian.   "Fauci: The Response Of Trump Admin Has Been Impressive, I Can't Imagine Anybody Could Be Doing More."     Real Clear Politics.   23 March 2020.