A genuine image of three murder victims has been reappropriated for a "type amen" scam. 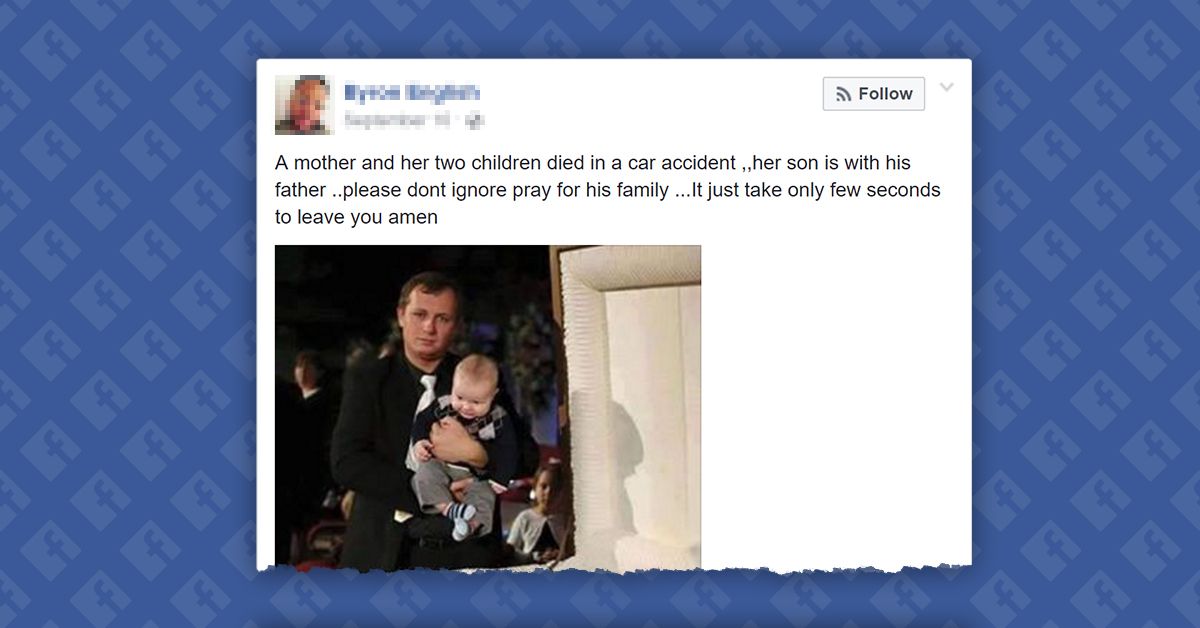 Claim:
A somber image shows a man whose wife and two children were killed in a car accident.
Rating:

On 10 September 2016, a photograph of a man with a baby at a coffin containing the bodies of a young woman and two small children appeared on social media. The description said:

A mother and her two children died in a car accident ,,her son is with his father ..please dont ignore pray for his family ...It just take only few seconds to leave you amen

The Facebook post was a clear and cynical example of like-farming, the practice of using shareable images and compelling stories to increase one's reach on social media. Typically, the person who posts a heartrending or otherwise emotionally stirring then implores users to interact with the photograph (and then switches around the page or photograph to make it appear as though a product or story is far more popular than it actually is).

In this particular case, the photograph shows Denis Bukhantsov and his infant son Mark gazing at his late wife Alina and their two older children. According to an October 2012 news article, the three Bukhantsovs were murdered by a family member:

The bodies of Alina, 23, Emmanuela, 3 and Avenir, 2, were together in a large open casket in the center of the church’s front platform.

Long lines of mourners filed by to view the deceased, who were well known in Sacramento’s Russian-American community.

Denis Bukhantsov, the husband and father, is now left with only his 6-month-old son Mark, who was not hurt in Tuesday’s attack.

Although liking and sharing Facebook posts of a misleading nature (or answering a plea to "type amen") does not necessarily pose a direct risk to users, photographs used for such a purpose are nearly always stolen and misrepresented.