Did Winston Churchill Say 'The Fascists of the Future Will Call Themselves Anti-Fascists?'

A quote incorrectly attributed to the former British prime minister was spread on social media by Texas Governor Greg Abbott. 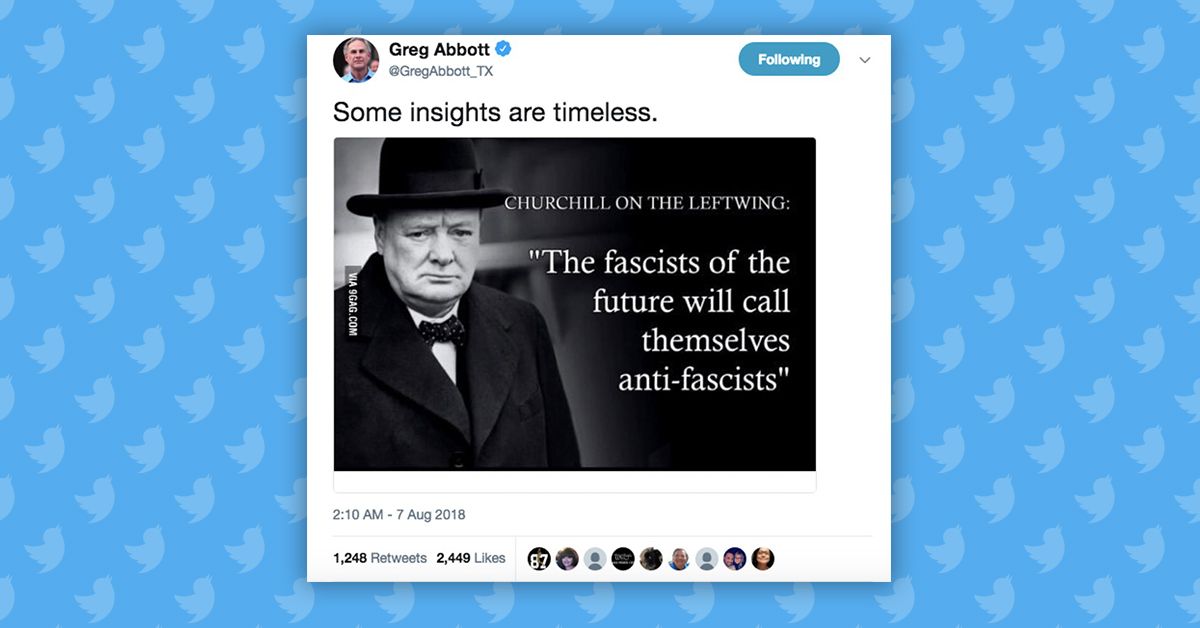 Claim:
Winston Churchill once said that the "fascists of the future will call themselves anti-fascists."
Rating:

On 7 August 2018, Texas governor Greg Abbott posted a 9gag.com-branded meme on Twitter which included a statement attributed to former British prime minister Sir Winston Churchill about how "fascists of the future will call themselves anti-fascists": However apt this quote may (or may not) be, it did not originate with Winston Churchill. Abbott deleted his tweet after critics pointed out that fact to him, but he said during a press conference that knowing who originally made the statement was "irrelevant" because he believed in its sentiment regardless of who said it: "What I tweeted was a sentiment that I had. It was irrelevant to me who may or may not have said that in the past. I didn't want to be accused of plagiarism for saying it. If no one else said it, attribute the quote to me because it's what I believe in."

So who does deserve credit?

Similar quotes positing the idea that fascism would come to America disguised by a different name can be traced at least as far back as 1936 (although they weren't attached to Churchill's name until decades later). On 18 March 1936, for example, the Cincinnati Inquirer reported on words delivered by Norman Thomas, an American Presbyterian minister who was running for president as the Socialist Party of America's candidate, at an informal luncheon: "Fascism is coming in the United States most probably, but it will not come under that name." A few days later the same newspaper mentioned the same statement in a book review of In the Second Year, a dystopian novel by Storm Jameson set in a fascist Britain. That article added some additional words to the statement and reported that Thomas had been quoting Huey Long, an American politician who had been assassinated the previous year:

Norman Thomas said recently in a speech made in Cincinnati "Fascism is coming in the United States most probably, but it will not come under that name." In this statement he was repeating the words of the late Huey Long, but Huey added: "Of course we'll have it. We'll have it under the guise of anti-fascism."

No one has yet been able to document Huey Long's having made such a statement, however.

Several variations of this quote have appeared in print since Thomas' 1936 remark. In 1938, for instance, Rev. Dr Halford E. Luccock of the Yale Divinity School said that "When fascism comes to America, and it has already come to some parts, it will not be marked with the swastika and labeled 'Made in Germany ... It will not even be called Fascism ... But will be called by that high-sounding and highly praised name - Americanism."

"Speaking of Fascism," she writes, "Of all national ways of life, it is, perhaps, the most quickly habit-forming. It is the alcohol and the opium of the political systems; it will rob us eventually of our physical and mental and even moral powers, but it gives us temporary illusion of escape from an inimical world, a lift of the spirit, a feeling of superiority, of power ... also, we are warned (though not loudly, not often enough) when -- or if -- fascism comes in all America she will come so prettily costumed in red, white and blue as to be practically indistinguishable from a music hall's Fourth of July performance 'Rockette,' than which nothing could look more charmingly, happily, uniformly american.

Apparently Churchill's name was spuriously appended to this statement about fascism circa 2010 more than 40 years after his death (and with no supporting evidence).

Timothy Riley of the National Churchill Museum told us that these words do not appear in any of the articles, speeches, or books penned by Churchill: "Winston Churchill authored over 15 million words — in articles, speeches, books and other writings. There is no evidence that the statesman wrote the words in question. It is impossible to know if he uttered the words in conversation, but I am not aware of any of Churchill’s contemporaries who recorded or recalled the statement."