Are Farmers Injecting Fruits and Vegetables with Oxytocin?

Reports imply Indian farmers are using oxytocin to boost the size of their fruits or vegetables , but it is unclear how widespread the practice may be. 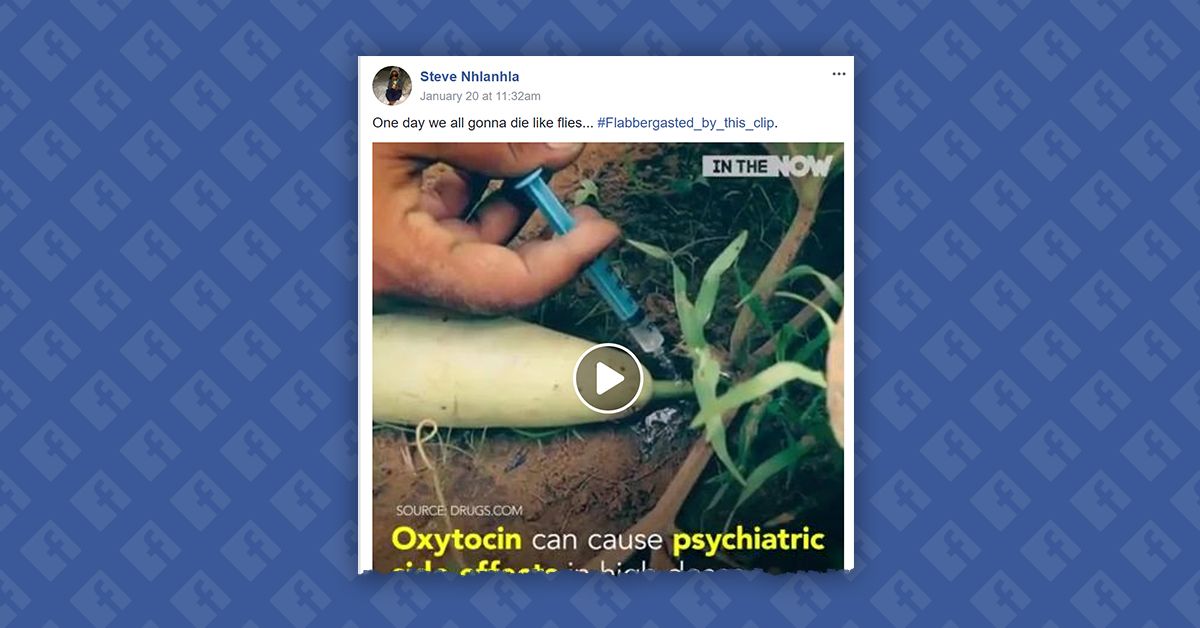 Claim:
Farmers are injecting fruits and vegetables with the human hormone oxytocin to enhance their growth and appearance.
Rating:

Nearly all reports of of farmers injecting fruits and vegetables with oxytocin originate from India, where a number of documented incidents have, in part, prompted a government effort to crackdown on oxytocin’s illegal agricultural uses.

The practice, which is illegal in both India and around the world, does not appear to be widespread outside of India, and no available scientific studies rigorously demonstrate how common its use is in India (or anywhere else).

On 28 July 2010, the Hindustan Times reported on an e-mail sent from the Indian Minister of Health to other lawmakers, warning of the dangers of farmers' using the animal hormone oxytocin to boost the size and appearance of their produce:

[Minister for Health Dinesh] Trivedi wants states to crack down on the illegal use of the prescription drug Oxytocin in fruit and vegetable — a drug that can cause headaches, dizziness, confusion, seizures, heart disorders, sterility, nervous breakdowns and memory loss when taken over time. Any kind of chemical ripening of fruit is prohibited under the Prevention of Food Adulteration Rules.

"Farmers are blatantly using hormone shots to speed up the growth of their vegetables. These hormones may cause irreparable damage to our health, if taken through these vegetables, over a period of time. [...] Even more shocking is that the public/authorities are not aware of this malpractice," wrote Trivedi in a letter to Union Health Secretary Sujatha Rao.

A human hormone implicated in a variety of functions related to mood, childbirth, and lactation, oxytocin (which is also distributed as a prescription medicine) has a lengthy and storied history as an illegal additive to dairy products all around the globe, including the United States. Limited research, however, indicates that the hormone could play a role in enhancing plant growth as well, albeit through mechanisms that are not yet fully understood.

Although other reports have come from India concerning the practice of injecting oxytocin into produce aside from this July 2010 incident (including headline-making news from as recently as 2015 when some paddy farmers were reported to be using it to salvage crops in the face of drought), much of the scientific and popular coverage on the topic of oxytocin injection ultimately references the aforementioned 2010 reporting. The coverage includes references made in a 2013 study authored by Indian researchers, who developed a chemical test for the presence of oxytocin in food based on that concern. Their study argued that “oxytocin is one of the most frequently used adulterants added in vegetables and fruits for increasing the growth rate.”

Because these studies rely primarily, and sometimes solely, on the 2010 statements made by Trivedi, it is difficult (from a scientific standpoint) to assess the claim that oxytocin is “one of the most frequently used” adulturents in fruit and vegetables, but it is clear at the very least that the practice has been employed in India to some extent.

More recently, in September 2016, millennial-targeted Indian media outfit India101 sent undercover reporters to what was described as a farm outside of New Delhi, where a farmer discussed and demonstrated the various practices used to ensure more profitable crops. The three-minute segment included this report:

The shocking revelations of a vegetable farmer just outside New Delhi show us the additives, injections and sprays used to make old vegetables look fresh.

And according to him, he isn't the only one. All farmers do this, he says. With rising inflation and families to feed, he says poor farmers such as himself are left with no option when consumers reject even fresh, hygienic vegetables.

Oxytocin injections are pumped directly into vegetables like bottle gourd, making them swell in size overnight. What would otherwise have taken a week to mature, is now ready to be shipped to the market overnight.

Illegal use of oxytocin in agriculture has more recently been a large enough problem for the government of India to take action. A 14 July 2017 Hindustan Times article reported that the Indian government would be cracking down on the manufacturing and production of oxytocin in an effort to reduce its misuse in farming, although the primary focus of that effort appears to appears to target the dairy sector and not fruit or vegetable farmers:

To check the wide misuse of the ... hormone oxytocin, India plans to restrict its manufacturing, sale and distribution in the public sector. Oxytocin ... is a naturally-occurring hormone that causes uterine contractions during labour and helps new mums lactate.

Its misuse is widespread in the dairy industry where livestock are injected with oxytocin to make them release milk at a time convenient to farmers. The hormone is also used to increase the size of vegetables such as pumpkins, watermelons, brinjals, gourds and cucumbers.

Oxytocin (depending on how much it might remain in a fruit or vegetable at the time of ingestion) can produce myriad negative health consequences:

When excess of oxytocin is found to be present in edibles it may cause headache, nausea, abdominal pain, drowsiness, etc. to the consumer.

Claims of oxytocin laced vegetables reappeared on the Internet in full force thanks to an abridged version of the India101 video posted to Facebook in January 2018. This video presented, without context, the claims of an Indian farmer in a way that implied the practice of oxytocin injection was widespread and global, a conclusion we cannot quantitatively vet at this time.

We reached out to Linda Harris, chair of the Food Science and Technology department at the University of California, Davis, and she told us:

Nobody I asked has heard of this practice alluded to in the US or Mexico.  One of the big costs in U.S. agriculture is labor. I am not an economist but would suspect that here fertilizers and proper production management would far outweigh any potential benefit of this type of concept.

Because the practice has been documented at least anecdotally in India, we rank the claim that farmers use oxytocin injections on fruit and vegetables as a mixture. Though a few claims of the practice exist outside of India, it is unclear how widespread this practice actually might be.

Bell, Aleeca F. et al.   "Beyond Labor: the Role of Natural and Synthetic Oxytocin in the Transition to Motherhood."     Journal of Midwifery and Women’s Health.   28 January 2014.

Bell, Aleeca F. et al.   "Standardization of HPTLC Method for the Estimation of Oxytocin in Edibles."     Journal of Food Science and Technology.   29 May 2013.