Is This Farmer Being Executed for Not Working with Castro? 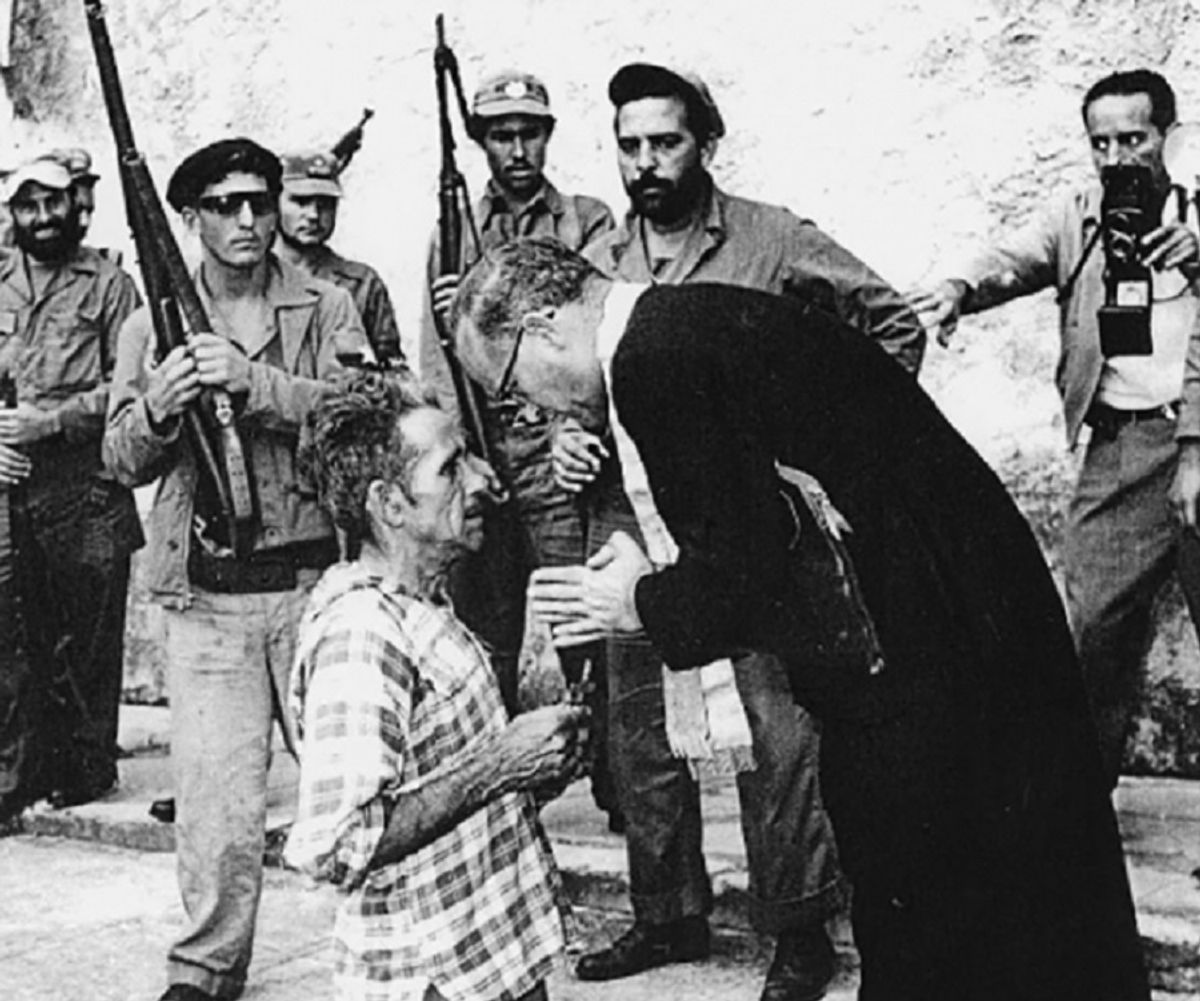 Claim:
A photograph depicts a priest giving the last rites to a Cuban farmer who was being executed because he "refused to work for the Castro regime."
Rating:

In August 2020, social media users circulated a photograph meme said to depict a priest giving the last rites to a Cuban farmer who was being executed because he "refused to work for the Castro regime": This image was indeed a Pulitzer Prize winner for United Press International (UPI) photographer Andrew Lopez in 1960, who snapped a series of four photographs of a man executed by a Fidel Castro firing squad, of which this picture was one. However, some of the other accompanying details in this meme are not quite accurate.

Fulgencio Batista was the military dictator of Cuba from 1952 until the end of 1958, when he was overthrown by forces led by Castro and his allies during the Cuban Revolution. This photograph does not depict a "farmer [who] refused to work for the Castro regime," but rather a member of Batista's army who had been charged as a war criminal by the victorious revolutionaries a few weeks after they finally ousted Batista.

The UPI caption for this picture read as follows: "Father Domingo Lorenzo performs last rites for Cuban Army Cpl. Jose Cipriano Rodriguez on Jan. 17, 1959. Rodriguez, who had served in Fulgencio Batista's army, was executed by firing squad after being found guilty for the deaths of two brothers. His tribunal lasted just one minute."

A UPI account of the circumstances behind the photograph, which was published in May 1960 when Lopez was awarded the Pulitzer Prize, stated that Rodriguez's trial lasted two hours rather than four minutes (although deliberations afterwards lasted only a minute), and it made no mention of Ernesto “Che” Guevara, a Castro lieutenant, being personally involved in the case (although Guevara reviewed the appeals and firing squad sentences of those convicted as war criminals in post-revolutionary Cuba):

Andrew Lopez, veteran United Press International photographer, felt like crying when he took his Pulitzer Prize-winning photographs of a Cuban war criminal kneeling before a priest, with an impatient firing squad watching.

Lopez was awarded the prize for a series of four photographs of Cpl. Jose (Pepe Caliente) Rodriguez preparing to die.

"When you have a man kneeling, being given spiritual consolation by a priest who is holding a cross in his hand as the victim presses forward to kiss it, there's no question," Lopez said.

"It was packed with emotion. I felt like crying myself," he said.

Rodriguez was sentenced Jan. 17, 1959, after a two-hour trial in San Severino fortress near Matanzas, Cuba. The tribunal conferred for one minute before finding him guilty, Lopez said. Rodriguez was marched from the trial room and taken down a flight of stairs to the courtyard.

"When I saw him marching down the stairs I went in front of him and into this huge, open air, dungeon-like area," Lopez said. "I started to make pictures.

"When Pepe Caliente fell to his knees as a priest held up a cross for him to kiss, the scene was one that will be hard to forget. I honestly felt like crying ...

"While all this was going on, the firing squad in the background impatiently was waiting for this scene to end so they could perform their duty."

The condemned man received a 24-hour stay just before sentence was to be carried out, but he was shot the next day.