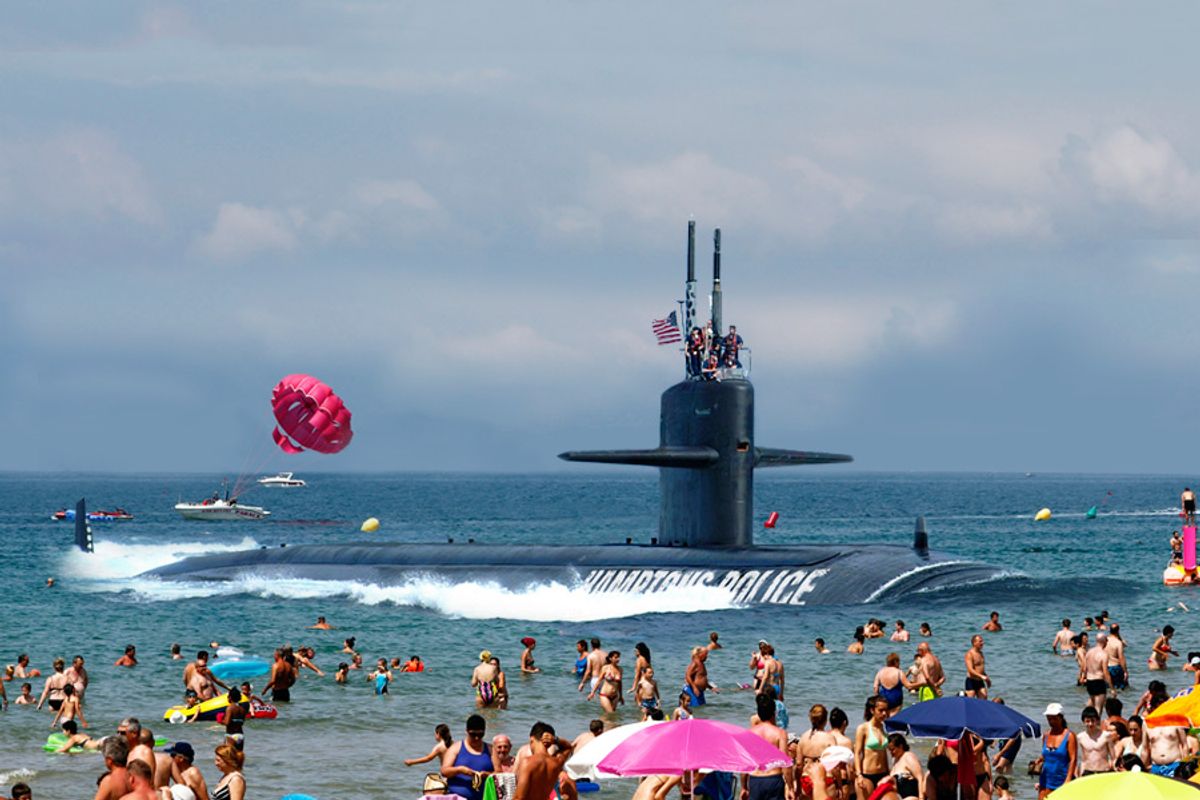 Claim:   The Hamptons Police have acquired a surplus military submarine and have since made their first arrest using the newly-deployed crimefighting craft.


Did the Hamptons police department get a decommissioned submarine? Sounds shady to me, but can't find any info if it is a joke or not.


“I want to emphasize that this submersible craft came at no cost to taxpayers,” Hamptons PD representative Larry Hirsch explains in a press release. “With the blessing of the Hamptons Municipal Board, we requested such a watercraft last year under a federal program to outfit local police departments with surplus military equipment.”

In addition to the excerpt quoted above, Dan's Papers also reported that Hirsch had discussed the Hamptons submarine with them by phone:


“While the craft reached the end of its usefulness for the U.S. Navy, the civilian applications of this submersible are numerous,” Hirsch says in the statement. “You never know what’s out there and we’re here to protect the citizenry from the worst case scenario,” he added in a phone call Tuesday. “Imagine the horror people would experience if a large military craft passed beneath their boat or emerged from depths within view of the beach — we’re here to stop that from happening. This sub will make a strong statement about our power and might,” Hirsch continued. “The people want to know their police will do whatever it takes — whatever it takes — to maintain order and control,” he said. “They want to see us as an unstoppable force beyond the reach of sleazy criminals’ lawyers and legal loopholes.”

A follow-up article, titled "Hamptons Police Submarine Unit Makes First Arrest," was published by the same source on 2015, reported that the Hamptons Police Department Submarine Unit (HPDSU) had apprehended several misbehaving boaters using the decommissioned submarine, and included a purported quote from one of the party-goers arrested in the raid:


“It was terrifying,” the boat’s captain, Clint Bartholomew, said after his arraignment Friday morning. “Everything went dark as this huge, black shape emerged from the depths, and next thing you know, this dude is yelling at us through some kind of loudspeaker and waving his arms so I can see him up in that tower thing,” the captain said, adding, “I have to say, it was pretty cool riding back in that thing, especially being totally baked as I was, but I’ll definitely be following my boating Ps and Qs while that thing is out there.”

The pair of articles about the Hamptons' police submarine were circulated widely in the days following their publication, possibly because their satirical nature was less detectable to people who are not familiar with the area. For instance, the Hamptons is a broader name for a number of villages and hamlets (including East Hampton, Southampton, West Hampton, Bridgehampton, Amagansett, and Sag Harbor) served by a number of smaller police departments.

Moreover, while Dan's Papers isn't strictly a satirical news outlet, the publication is well known for issuing hoaxes and fake news alongside their standard articles:

The nature of the more outlandish content in Dan's Papers is well documented, and the site's Police Blotter reveals a roster of strictly satirical items.