A long-circulating report of an Amber Alert issued for three-year-old girl taken by man in a grey car is not valid. 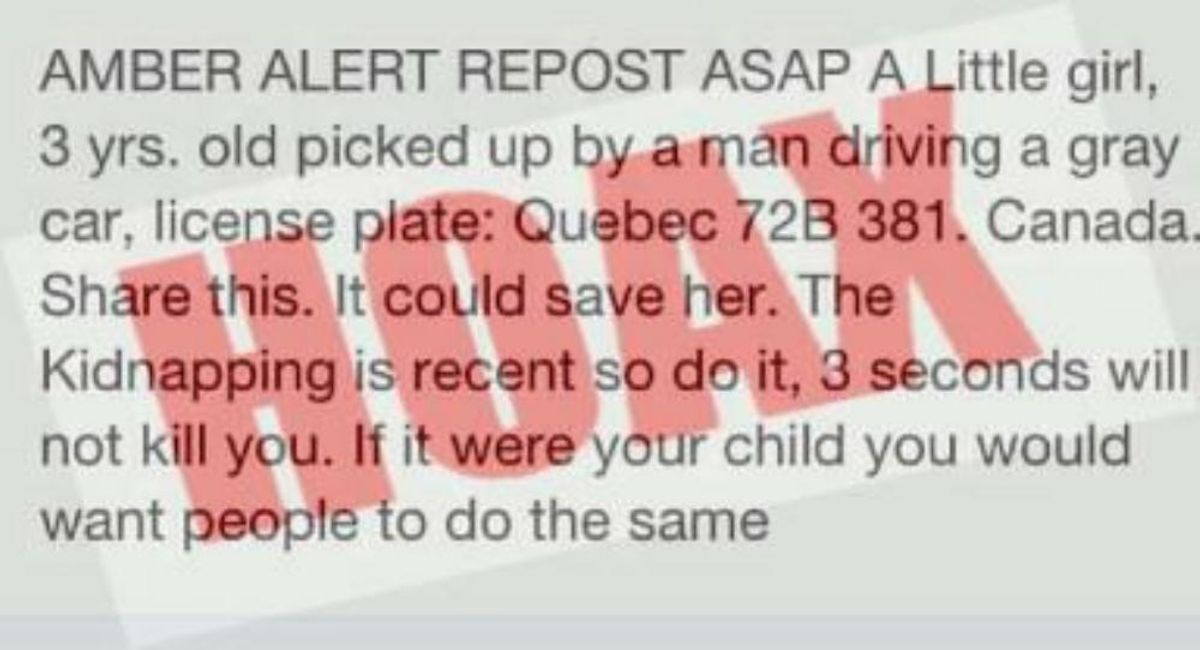 Claim:
An Amber Alert was issued for three-year-old girl taken by man in a grey car.
Rating:

On 15 July 2009, a missing child hoax spread across the U.S. and into Canada via cell phone text message. While certain elements of the message were altered to geotarget the bulletin to local recipients (e.g., it included a city or state name, or a street widely known to area residents), the meat of the alert remained the same: a three-year-old girl had been abducted by a man in a new silver-colored truck bearing a license plate of

Even as the "alert" jumped from cell phone to cell phone (and was additionally posted to blogs and tweeted on Twitter, the latter even by Missouri Senator Jason Crowell), police agencies in various localities were issuing denials that there had been such an abduction or that an Amber Alert for the child described had been issued.

Over Memorial Day weekend of 2006, three-year-old Jewel Strong of Jonesboro, Georgia, was vacationing with her family at a beachside spot in State Park in Panama City, Florida. On 2006, Jewel and her 18-year-old aunt were out on the water on a raft/float that drifted outside the park's waveless "kiddie pool" swimming nook and into an adjacent jetty channel with strong currents. Although rescuers managed to save Jewel's aunt, they were unable to find Jewel herself, and intensive searches of the area by divers, boats, and helicopters throughout the next few weeks failed to turn up any sign of her.

Her family did not accept that the little girl had drowned and so circulated appeals for help in finding the child included a photograph of Jewel Strong. That same photo was teamed by hoaxsters in the June 2009 "missing child" with the following text:

TAKEN BY A MAN DRIVING A NEWER SILVER TRUCK IN IDAHO FALLS, IDAHO.

WHAT IF THIS WAS YOUR LITTLE GIRL?

if she was your daughter, you would forward it.
Missing 3 year Old Girl -
You never know, who knows whom.

The text of the June 2009 e-mail hoax (suitably stripped down to remove extraneous information, including Jewel's name and photo) was reworked into a text message sent to cell phones in July 2009. Notice that the and cell phone text message hoaxes share the same core elements of a three-year-old girl having been made off with by a man driving a new(er) silver-colored truck bearing a license plate number of