Peddlers of misinformation attempted to sow confusion in the wake of the Taliban's takeover of Afghanistan. 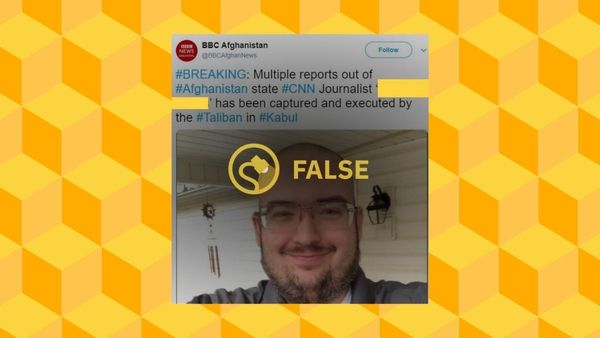 In mid-August 2021, a few weeks after the United States withdrew troops from Afghanistan, Taliban insurgents moved in and seized control of the presidential palace in Kabul. As this news unfolded and reporters worked (at great peril) to cover the tumultuous and deadly events, a series of imposter social media accounts started spreading misinformation.

Disinformation researcher Cindy Otis noted that there were at least two fake news accounts purporting to be the Afghanistan branches of the BBC and CNN. Neither @BBCAfghanNews nor @CNNAfghan are affiliated with these news networks.

These imposter accounts posted a message claiming that a CNN reporter named "Bernie Gores" had gone missing during the Taliban's takeover of the area. This claim is false. The man pictured here is not a CNN reporter and his name is not Bernie Gores. This is YouTube personality Jordie Jordan. While many of these imposter fake news accounts were quickly removed, this rumor quickly spread to other social media platforms.

This is not the first time that this racist hoax (the fictional name of this reporter resembles a racist phrase in the same vein as I.P. Freely or Seymour Butts) has been circulated on the internet. Jordan's photograph, along with the fictional name, has also been circulated in the aftermath of other tragic events, such as the warehouse explosion in Beirut in August 2020.

This also is not the first time that this type of hoax (spreading an unrelated photograph during a chaotic news event) has gained traction on social media. For examples, internet trolls have frequently circulated an image of comedian Sam Hyde in the aftermath of mass shooting events.