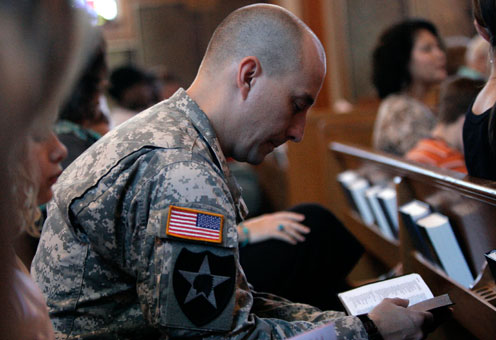 Something you’ll want to be aware of: Sent by Retired Vice Admiral Bob Scarborough, of Arlington , VA.


I wanted to give ya’ll some disturbing information on our wonderful president. I work with the Catch-A-Dream Foundation (www.catchadream.org) which provides hunting and fishing trips to childen with life-threatening illnesses. It is a great program needless to say. This past weekend we had our annual banquet/fundraiser event in Starkville. As part of the program, we had scheduled Greg Stube, a highly decorated Green Beret and inspirational speaker who was severely injured while deployed overseas and didn’t have much of a chance for survival. Greg is stationed at and received permission from his commanding officer to come speak at our function. Everything was on go until Obama made a policy that NO CAN SPEAK AT ANY FAITH-BASED PUBLIC EVENTS ANYMORE. Needless to say, Greg had to cancel his speaking event with us. Didn’t know if anyone else was aware of this new policy.. Wonder what kind of news we all will receive next?

Origins:   The Catch-A-Dream Foundation is a non-profit organization working in cooperation with the Mississippi State University Extension Service and the Mississippi Wildlife Federation in order to “grant once-in-a-lifetime hunting and fishing experiences to children 18 years old or younger who have a life-threatening illness.” held a “Catch the Vision” benefit event on 2009 at which Greg Stube of the was slated to appear as a speaker. According to the account reproduced above, appearance at the benefit was nixed by President Obama himself, who supposedly issued a directive barring all U.S. service members from speaking at “faith-based public events.” According to the Starkville Daily News, however, speaking engagement was cancelled at the behest of the Department of Defense (not the president) and stemmed from a DoD policy barring military personnel from speaking at “charitable events” (not specifically events):

On the lineup was Army Sgt. First Class Gregory Stube to serve as the guest speaker, but the United States Department of Defense has cancelled Stube’s speaking engagement.

Dr. Marty Brunson, executive director of the Catch-A-Dream Foundation, based at Mississippi State University, said the Department of Defense will no longer allow military personnel to speak at charitable events.

Carol Darby, chef of the Media and Community Relations Division of the Special Operations Command, in an to Brunson, said (we) “discussed the request with our legal experts and command leadership. We regret that we cannot support the event even with modified participation. We greatly admire the Foundation’s work. This was a difficult decision for us. Please accept our best wishes for a great event.”

Brunson said there are a few final details from the Department of Defense that needs clarifying, but those details could not be resolved in time for tonight’s banquet.

In an attempt to clear up the confusion, we contacted Catch-A-Dream executive director Brunson ourselves. told us that Sgt. Stube’s appearance at the event had been disallowed “NOT [as] a function of any influence or directive from the President” nor because of “a change in policy” aimed at “faith-based organizations”; it was an application of existing policy regarding the involvement of military personnel in fund-raising activities:

There is an escalating swirl of misconstruction surrounding these issues. It is evident that the American public remains fervent and passionate regarding the liberties that we enjoy as citizens of this country. That fervor, as valuable as it may be, can also sometimes result in passion; this appears to be the case in this situation. We as humans are inherently dubious of authority, and the current political climate in our country lends itself to doubt and propensity to presume the worst about our leadership. Clearly this has led to some negative commentary and discussions, and it seems prudent to encourage a re-direction of those energies in a productive direction. Here are a few pertinent points:

It is vital that we all first fully understand that the decision reached by the Department of Defense regarding our request for SFC Stube to speak at our event was NOT a function of any influence or directive from the President, nor was it a change in policy. It is my understanding that the decision was based upon strict interpretation of an existing policy regarding involvement of military personnel in “fund-raising” activities. Though it has been suggested, it is not clear whether that strict interpretation represents any change in approach or application of policy. Thus, I strongly encourage us to give any benefit of doubt to our military leadership.

The decision was in no way related to issues regarding “faith-based” organizations. The consideration included only the question regarding The faith-based aspect was not an issue, since Catch-A-Dream, by charter, is not a faith-based foundation. Though there are clearly disturbing undercurrents in existence that do not appear to bode positively regarding religious priorities and futures in this country, these, as best I can determine and discern, DID NOT play a role in this particular case.

Although there was great disappointment when SFC Stube was unable to speak at the event, it is clearly recognized and understood that he was simply abiding by policy and orders, and in no way did SFC Stube abdicate any responsibility. We had, in fact, initially based our plans for the

event upon personal verbal commitment and discussions, and the assumption that would ultimately be granted permission to honor the engagement. Regrettably, we were premature in assuming the commitment; that was our fault, not the fault of the military.

Because of current running commentary I fear that the message and its outreach potential may be thwarted or otherwise compromised. The intent of the military’s outreach effort, it appears to me, is not to breed disharmony, but rather to build bridges. If the objective is not being accomplished there may be no perceived need for the program! The very importance of the “Service Beyond Sacrifice” concept leads us to conclude that rather than perpetuating discontent and criticism, we should seek to channel those same energies, that American fervor that has clearly been stirred, toward a concerted and organized effort to communicate with our military leadership and to bring a new harmony in that relationship. The energies devoted to the articles, phone calls, letters and other modes of communication must be somehow systematically toward an empathetic and supportive appeal to military command for appropriate latitude with respect to policy and regulations such that the concept of an outreach program such as “Service Beyond Self,” and the bridges it builds, can be maintained and even magnified, rather than fall victim to unwitting but potential fatal fallout from our (perhaps mis-directed) fervor. The American public, and our valiant military forces, deserve no less.

In short, according to the U.S. Army, this issue was not a “faith-based” issue or a substantially new interpretation of policy, but rather an application of a long-standing policy that prohibits uniformed military personnel from engaging in most political, fundraising, and religious activities. They are allowed to participate in such activities, but only while off-duty and out of uniform, and only as long as they are not paid for their time. ( told us that the original request did indeed call for to appear in uniform, but subsequently indicated they were amenable to his participation in any mode that was deemed acceptable by the Army.)