On the flip side, if a president is impeached (but not convicted), is that person prevented from running for a second term? 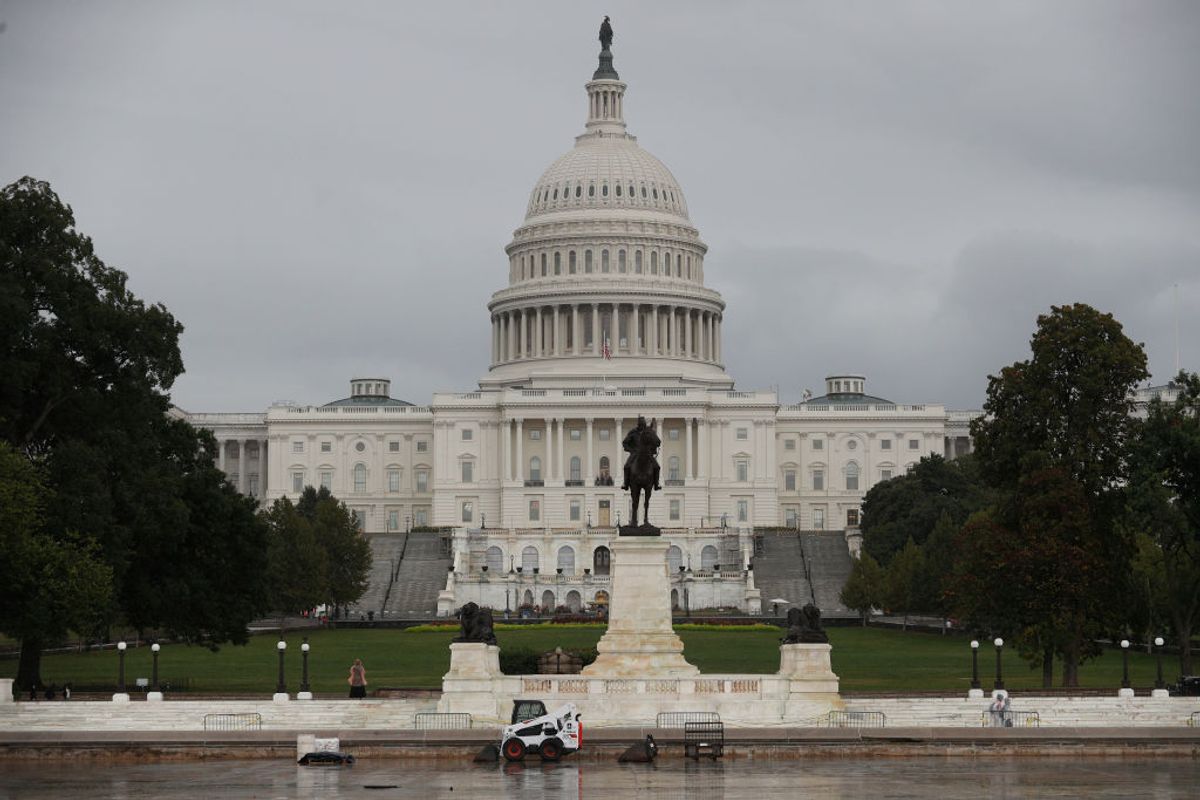 Claim:
The U.S. Constitution states that if a president is impeached by the House but not convicted by the Senate, that person's first term is nullified and they are eligible to run for office two more times.
Rating:

As talk of impeachment flooded the internet in September 2019, we came across two rumors concerning the impact of the impeachment process on President Donald Trump's reelection opportunities.

The first held that a president who was impeached by the House, but not convicted by the Senate, could run for office two more times because the failed impeachment would nullify the first term. The second posited that if the House votes to impeach a president, but the Senate doesn't convict and remove the person from office, the president is barred from running for office again.

We'll take a look at each of those theories below. But first, a quick look at how the impeachment process works. People often use the word "impeachment" when referring to the removal of a president from office. But that's not exactly how it works. The House of Representatives has the "sole Power of Impeachment," as stated in Article I, Section 2, Clause 5 of the U.S. Constitution. But it is up to the Senate to convict and remove a president from office. In this way, "impeachment" is roughly akin to bringing formal charges against an individual. It is then up to the Senate to convict the individual on those charges.

The aforementioned theories both deal with the gray area between impeachment and conviction. In other words, what happens if the president is impeached by the House of Representatives but is not convicted by the Senate?

Theory 1: If a president is impeached by the House but not convicted by the Senate, the first presidential term is nullified and the president may run for election two more times.

FALSE: This theory has been posited by a few social media users, but it reached a larger audience when it was shared by pizzagate conspiracy theorist Jack Posobiec:

The tweet reads: "These Democrats don't realize that if they impeach Trump and the Senate doesn't confirm it then it nullifies Trump's first term and he gets to run two more times. Read the Constitution, people."

This is not how impeachment works.

Before we get to what the Constitution says about impeachment, we can get a glimpse of the hypothetical scenario posited in this tweet by taking a quick look at our country's recent history.

President Bill Clinton was impeached by the House of Representatives on Dec. 19, 1998. However, Clinton was not convicted by the Senate. We searched news reports from the time and found no serious reporters, historians, or politicians arguing that the Senate's failure to convict Clinton literally nullified the president's previous term and gave him the opportunity to run for office again.

The Senate today acquitted William Jefferson Clinton of perjury and obstruction of justice, ending a 13-month drama that catapulted an affair with a White House intern into only the second presidential impeachment trial in history. Permitted to finish his term, the 42nd president declared he was "profoundly sorry ... for what I said and did."

"This can be and this must be a time of reconciliation and renewal for America," Clinton said in a brief statement from the White House Rose Garden about two hours after the historic verdict.

Chief Justice William Rehnquist pronounced Clinton’s acquittal at 12:39 EST. "It is therefore ordered and adjudged that the said William Jefferson Clinton be and he hereby is acquitted of the charges in the said articles," he intoned.

The process for impeachment is laid out in Article I and Article II of the U.S. Constitution. This text says nothing about a president's term being "nullified" by an impeachment proceeding. Furthermore, the 22nd amendment of the Constitution explicitly states that "no person shall be elected to the office of the President more than twice."

Doug Pennington, director of communication for the Constitutional Accountability Center, told us in an email that Posobiec's statement was false:

The 22d Amendment alone unequivocally disproves that ridiculous, dangerous claim. The first words of the Amendment state: "No person shall be elected to the office of the President more than twice …." Donald Trump has been elected once. Provided he isn’t convicted by the Senate in an impeachment trial and disqualified from holding future office, he can run for a second term, and only a second term.

That’s enough to negate that dreadful tweet, but anyone who considered some version of that question in good faith would have looked anywhere — literally anywhere — in the Constitution for textual support for the belief that if "[1] they impeach Trump and [2] the Senate doesn't confirm it then [3] it nullifies Trump's first term and [4] he gets to run two more times." Having found absolutely none, instead coming across Article I Section 3 and the 22d Amendment, among other sections, such a good-faith questioner would have concluded that the opposite is true, and would not have made such a claim publicly for fear of spreading disinformation.

Theory 2: A president is barred from seeking a second term once impeached.

MOSTLY FALSE: A number of social media users seem to be under the impression that Trump would not be able to seek reelection if the House of Representatives impeaches him. One Twitter user, for instance, wrote: "If he gets impeached he won’t be able to run in the next election like he plans to. It would guarantee that we can’t have 4 more years under his leadership."

But that isn't the case. A president who is impeached by the House but is not convicted by the Senate could still run for reelection.

Pennington told us: "Nothing in the Constitution’s language on impeachment prevents a president impeached but not convicted from running for a second of a two-term maximum."

An opinion piece in The Hill noted:

If the Democratic majority in the House impeaches the president without broad political consensus in the Senate (and country) to convict the president and remove him from office, impeachment will be weaponized by the president in the 2020 campaign. Trump will argue that liberal Democrats and the news media are out to get him, that he has done nothing wrong, and that you can’t impeach a president who has done a great job. This mantra will play well with his loyal base.

However, a bit of truth is offered here. The Constitution explains the country has two penalties for impeachment: removal from office and disqualification "to hold and enjoy any Office of honor, Trust or Profit under the United States." If a president is impeached by the House of Representatives, the Senate could convict, remove the president from office, and disqualify the person from holding future office.

This scenario, however, falls into some gray area because it has never been tested at the presidential level. It is possible that the Senate could take two separate votes, one on removal from office and one on disqualification from future office, which could result in a president's removal from office but provide an opportunity to seek reelection. It's also theoretically possible that a president who has been impeached, convicted, removed, and disqualified, could seek office at a lower level of government.

We asked Pennington about the possibility of a president seeking reelection after the House has impeached and the Senate convicted the person. He told us:

A convicted president can be prohibited from again holding office if the Senate so decides, per Article I Section 3, which includes: “Judgment in Cases of Impeachment shall not extend further than to removal from Office, and disqualification to hold and enjoy any Office of honor, Trust or Profit under the United States: but the Party convicted shall nevertheless be liable and subject to Indictment, Trial, Judgment and Punishment, according to Law.” Disqualification is not automatic, but up to the Senate’s discretion.

While unsettled, a strong argument exists, however, that members of Congress are not encompassed by the language “Office of honor, Trust or Profit under the United States.” If so, then perhaps an impeached president could run for the House or Senate. It’s untested.

Additionally, some argue (at fn. 23) that an impeached and convicted official who the Senate decided to disqualify from holding future office, per Article 1 Section 3 above, would not be disqualified from holding a state office. Again, untested.

More confident saying that a Senate disqualifying a president from holding office after an impeachment conviction would at least prohibit him/her from holding a federal office in either the executive or judicial branches, and at least possibly congressional or state office.

To sum up: Although a president is impeached by the House of Representatives, the repercussions of this legal process don't come to fruition until the Senate votes to convict the president.

If that happens, the Senate can vote to remove the president from office and disqualify the person from holding future office. If the Senate does not convict, the president will not be removed from office, nor will the person be prevented from seeking reelection (if he/she has not already reached the two-term limit).

Nowhere in the Constitution, however, does it state that a failed impeachment process would "nullify" a presidential term and allow a president to seek extra time in office.

Phillips, Amber.   "What You Need to Know About the Impeachment Inquiry Into Trump."     The Washington Post.   30 September 2019.