Is This a Photograph of the Woman Who Modeled for the Statue of Liberty?

Computer-generated faces are often confused for those of real people. 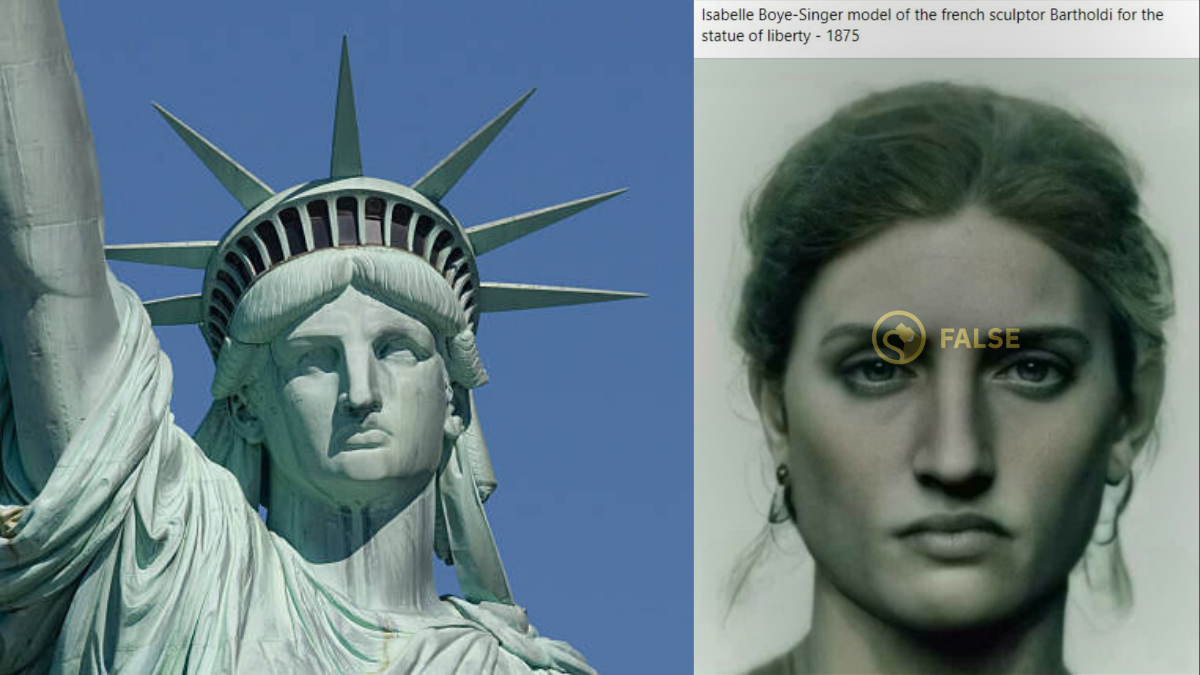 Claim:
A photograph shows Isabelle Boyer-Singer, the woman who modeled for the Statue of Liberty.
Rating:

This image is not a photograph of a person. It is a digital rendering of what the Statue of Liberty might look like if she was a real person. Furthermore, while some have suggested that Isabelle Boyer-Singer (not "Boye-Singer," as her name is misspelled in an internet meme) was the model for the Statue of Liberty, this has not been verified. The common consensus is that the Statue of Liberty's face was modeled after sculptor Frederic-Auguste Bartholdi's mother.

In March 2022, an image supposedly showing "Isabelle Boye-Singer" was widely circulated on social media along with the claim that she was the original model for the Statue of Liberty: This is not a photograph of Isabelle Boyer-Singer (misspelled "Boye-Singer" in the meme). In fact, this isn't a photograph at all.

The above-displayed image was created by artist Bas Uterwijk in 2021 as part of a series of "AI (artificial intelligence) portraits" of historical figures. Uterwijk explained his process in an interview with Bored Panda:

"These 'Deep Learning' networks are trained with thousands of photographs of human faces and are able to create near-photorealistic people from scratch or fit uploaded faces in a 'Latent Space' of a total of everything the model has learned. I think the human face hasn't changed dramatically over thousands of years and apart from hairstyles and makeup, people that lived long ago probably looked very much like us, but we are used to seeing them in the often distorted styles of ancient art forms that existed long before the invention of photography." Was Isabelle Boyer-Singer the Statue of Liberty Model?

The viral image we're concerned with is a computer-generated image of what the Statue of Liberty might look like if she were a real person, not a photograph of Isabelle Boyer-Singer. But was Boyer-Singer really the model of this famous statue, as the meme above stated?

The Statue of Liberty was created by sculptor Frédéric Auguste Bartholdi in 1886. While there isn't a definitive answer to the question of whom Bartholdi used as a model, most historical sources say that the statue's face was modeled after Bartholdi's mother.

It's possible that Boyer-Singer was the model for the statue's torso. While this claim has been around for decades, we've yet to encounter any evidence to definitively support it. Boyer-Singer was married to Isaac Merritt Singer, the creator of the Singer Sewing Machine, until Singer passed away in 1875. Then, according to rumor, Boyer-Singer met and married Bartholdi, who would later use her image as partial inspiration for his sculpture. While there may be some measure of truth to these claims, the above-displayed image certainly isn't a photograph of Boyer-Singer.