A computer system outage led to a ground stop order from the U.S. Federal Aviation Administration on Jan. 11, 2023, according to The Associated Press. 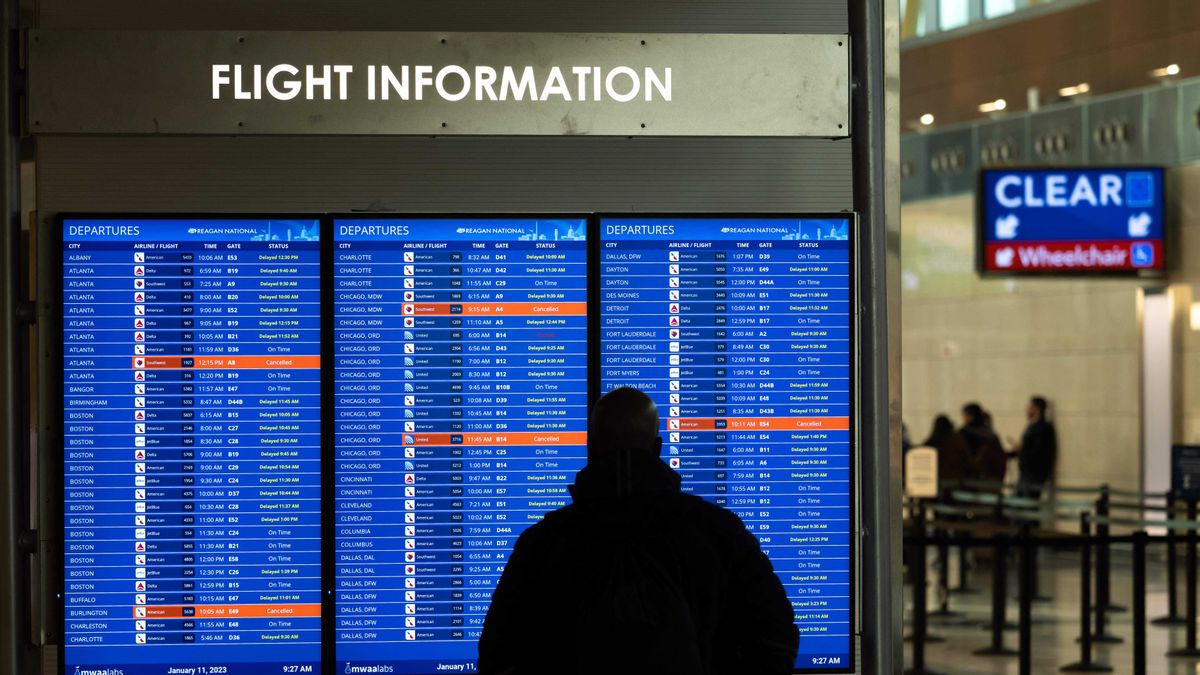 The Jan. 11, 2023, order from the FAA was to "pause all domestic departures" until a specified time.

However, this was only a ground stop. Flights already in the air were permitted to land at their destinations. In contrast, on 9/11, all flights were grounded, meaning U.S. airspace had been ordered to be closed, with aircraft already flying being told to land at the nearest possible airport.

Hours earlier, the U.S. Federal Aviation Administration (FAA) had ordered a "pause" of all domestic departures due to what was referred to a computer system outage.

It's possible that some of our readers were curious if this FAA order truly was the first time that all U.S. flights had been grounded since the attacks of Sept. 11, 2001, a day when terrorists hijacked four airplanes and killed nearly 3,000 Americans. Two of the airplanes crashed into the north and south towers of the World Trade Center in New York City, which both collapsed soon after. A third plane struck the Pentagon. The fourth plane, United Airlines Flight 93, crashed in a field in Somerset County, Pennsylvania, and was "the only one of the four hijacked aircraft that failed to reach the terrorists' intended target that day," thanks to the "unity, courage, and defiance in the face of adversity" that was shown by passengers and crew, according to NPS.gov.

While the January 2023 "pause" of all domestic departures was very rare, it was still different than what occurred on 9/11.

The main difference here was that flights already in the air were permitted to land at their destinations.

In contrast, on 9/11, all flights were grounded, meaning U.S. airspace had been ordered to be closed, with already-departed aircraft being ordered to land at the nearest possible airport.

As for the "pause" of departures, The Washington Post quoted a former FAA official who could not recall another time since 9/11 when so many flights had been impacted by any such order:

The nationwide flight stoppage imposed by the FAA on Wednesday was the first of its kind since the terrorist attacks of Sept. 11, 2001, according to Michael McCormick, a former agency official.

"This is unheard of, and then the action that the FAA had to take in grounding all the flights makes it even more significant," said McCormick, now a professor at Embry-Riddle Aeronautical University.

Longtime aviation insiders could not recall an outage of such magnitude caused by a technology breakdown. Some compared it to the nationwide shutdown of airspace after the terror attacks of September 2001.

"Periodically there have been local issues here or there, but this is pretty significant historically," said Tim Campbell, a former senior vice president of air operations at American Airlines and now a consultant in Minneapolis.

Beyond these two reports, we were not yet able to find any other dates between 9/11 and January 2023 when any such "pause" order had been given by the FAA on a nationwide scale.

We reached out to the FAA's press office to ask about the rumor and will update this story if we receive an official response.

The Cause of the Outage

As for the outage in January 2023, the AP published that the White House said there were no initial signs of a cyberattack. U.S. President Joe Biden also told reporters that the U.S. Department of Transportation was investigating.

According to the AP, the cause of the outage initially looked to have been an "antiquated computer system":

Whatever the cause, the outage revealed how dependent the world's largest economy is on air travel, and how dependent air travel is on an antiquated computer system called the Notice to Air Missions System, or NOTAM.

Before commencing a flight, pilots are required to consult NOTAMs, which list potential adverse impacts on flights, from runway construction to the potential for icing. The system used to be telephone-based, with pilots calling dedicated flight service stations for the information, but has moved online.

The NOTAM system broke down late Tuesday, leading to more than 1,000 flight cancellations and more than 6,000 delayed flights by 11 a.m. Wednesday, according to the flight tracking website FlightAware.

CNN.com and others later reported that a corrupt file was to blame.

This story will be updated if we further information comes to light.

Wallace, Gregory, and Pete Muntean. "A Corrupt File Led to the FAA Ground Stoppage. It Was Also Found in the Backup System." CNN, 11 Jan. 2023, https://www.cnn.com/travel/article/faa-ground-stop-causes/index.html.

Jan. 13, 2023: This story's rating was updated from "False" to "Mixture" in order to clarify the difference between the "pause" in departures in January 2023 and what happened on 9/11.