Did a Christian School Expel a Student For Wearing Rainbow-Patterned Sweater?

Whitefield Academy in Kentucky cited a 15-year-old student's alleged previous code violations and "a posture of morality and cultural acceptance" contrary to the school's beliefs in a photo posted to Facebook in December 2019. 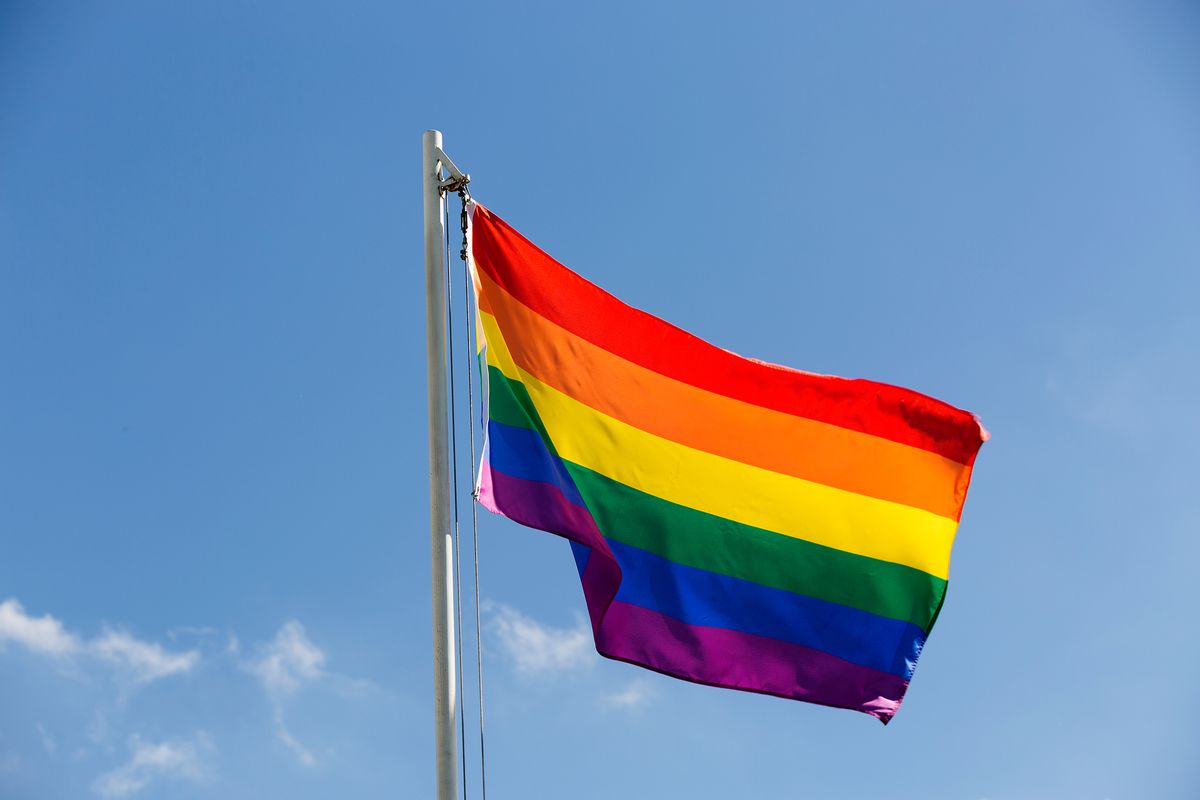 Rainbow flag on a flagpole in front of blue sky

Claim:
Whitefield Academy in Kentucky expelled a 15-year-old student for wearing a rainbow-patterned sweater and having a rainbow-designed birthday cake in a Facebook photograph.
Rating:

In January 2020, we received multiple inquiries from readers about the accuracy of news reports that claimed a Christian private school in Kentucky had expelled a student after a photograph emerged on social media that showed her wearing a rainbow-patterned sweater and sitting in front of a birthday cake with a rainbow design.

The student in question has been named in multiple news reports and social media postings, but Snopes is not naming her, and is publishing only a pixellated photograph of her, because she is a minor who has not herself made any public pronouncement relating to the controversy.

On Jan. 14, for example, the New York Daily News published an article with the headline "Kentucky Teenager Takes Picture Wearing Rainbow Shirt; School Expels Her For 'Lifestyle Violations.'" The article reported that:

A Kentucky teen has been expelled from her school after a photo of her 15th birthday celebration was shared on social media. The celebratory photo captured [the student] — who was wearing a rainbow shirt, and smiling in front of a colorful cake — at a local restaurant, where she’d gone with her family to celebrate. “She was happy, she looked beautiful,” [the student's] mother, Kimberly Alford, told local news station WAVE 3.

“You know, of course as a mom, I took her picture of her blowing out her candles and I posted that on my Facebook page." The moment was a cause of glowing smiles for some, but gloomy frowns for others. The picture caught the attention of administrators of [the student's] private school, the Whitfield Academy, who found no reason to celebrate with the teen. In fact, they called the image just the latest incident in two years’ worth of the student’s “lifestyle violations." Alford maintains there was no hidden agenda behind the picture. It was simply a teen celebrating her birthday. “She loves to laugh and dance and that’s just her,” she said. “There was nothing intended by that and even when I went back and got the receipt from the bakery, it didn’t say anything about representation, it just said assorted colors.”

That’s not how Whitfield Academy viewed it. A few days after Alford shared the photo on social media, she was contacted by the head of school, Dr. Bruce Jacobson. “It was an email expelling [the student] from Whitefield immediately due to a post on social media,” Alford said. Jacobson said the picture “demonstrates a posture of morality and cultural acceptance contrary to that of Whitefield Academy’s beliefs.”

Similar articles were published by the Huffington Post, Daily Mail, Fox News, and NBC News. The story was first reported by the Louisville, Kentucky-based television channel WAVE. On Jan. 15, a spokesperson for Whitefield Academy provided a statement to WAVE, stating that the student had not been expelled solely on the basis of the birthday photograph, but had already committed multiple violations of the school's student code of conduct, and had been given a final warning. The statement read:

Inaccurate media reports are circling stating that the student in question was expelled from our school solely for a social media post. In fact, she has unfortunately violated our student code of conduct numerous times over the past two years. In the fall, we met with the student to give her a final chance to begin to adhere to our code of conduct. Unfortunately, she did not live up to the agreement, and therefore, has been expelled.“

Whitefield Academy is a Christian-based school with a 43-year history of educating students in a learning environment informed by our shared Christian values. All parents who enroll their children in our private school know up front that we ask the students to adhere to a lifestyle informed by our Christian beliefs. There are numerous school options in our community for students who do not wish to attend a Christian-based school, and we wish our former student all the best as she finds a learning environment that is right for her.

Whitefield Academy is accredited by ACSI/AdvancEd and a member of the Non Public School Commission of Kentucky, and therefore we meet all Kentucky regulations and laws. Our code of conduct is on par with other private Christian schools in our area. It is unfortunate that one of the student’s parents chose to post internal family matters on social media, and we hope our former student is not adversely affected by what her parents chose to make public about her situation.

The school's statement did not explicitly confirm that the photograph posted to Facebook by Alford, showing her daughter celebrating her birthday, had been the catalyst for the decision to expel her, but taken with other evidence, it certainly appears to have been a tacit acknowledgement.

Alford appears to have provided WAVE with an email sent to the student's parents on Jan. 6, in which Whitefield Academy's Head of School Bruce Jacobson purportedly cited "a recent picture, posted on social media, which demonstrates a posture of morality and cultural acceptance contrary to that of Whitefield Academy's beliefs." The email added: "Per our in-person meeting on October 17, 2019, we made it clear that any further promotion, celebration or any actions and attitudes that are counter to Whitefield's philosophy would not be tolerated. As a result, we regret to inform you that [the student in question] is being dismissed from the school, effective immediately."

On Dec. 30 and Dec. 31, Alford posted the following photograph to her Facebook account. It shows her daughter celebrating her 15th birthday in front of a rainbow-patterned cake, while wearing a rainbow-designed sweater: We asked Alford to provide Snopes with a copy of the email sent on Jan. 6, which contains an image file attachment of the photograph in question, but we did not receive a substantive response to our inquiries. Similarly, we asked Whitefield Academy to confirm that the photograph which was, in the school's own description, the catalyst for the student's expulsion, was indeed the "birthday photograph," and that the "posture of morality and cultural acceptance" in question related to the fact that the rainbow is sometimes displayed and recognized as a symbol of LGBTQ pride and solidarity. We did not receive a substantive response to that question.

However, the Whitefield Academy statement published on Jan. 15 came after a wave of national news reports about the controversy, all of which cited the same birthday photograph as the "recent picture posted on social media" that the school said had triggered the student's expulsion. The school's statement made a point of saying that the recently posted photograph had been only the catalyst for the student's expulsion, and not its sole basis, but the statement did not refute the widely publicized and repeated claim that the photograph in question was the one that showed the student wearing a rainbow sweater while celebrating her birthday with a rainbow cake. This strongly suggests, but doesn't quite confirm, that the photograph that triggered the school's decision to expel the student in question was indeed the birthday photograph.

We asked both Alford and Whitefield Academy whether they could provide any details about the student's "numerous" alleged previous violations of the school's student code of conduct, but we did not receive a substantive response from either. We asked Whitefield Academy to cite the exact sections of the code of conduct that they claimed the student had violated previously, as well as the section of the code that was purportedly violated in the publication of the photograph, especially in light of the fact that it appears the photograph was posted only by Alford, but not by her daughter, the student herself. We did not receive a substantive response to that question, either.

The only publicly available version of Whitefield Academy's student/parent handbook dates to 2014, so it's not clear whether all its provisions are still in force. However, one section perhaps provides a clue as to the rationale behind the student's expulsion. It reads:

"Whitefield Academy’s Biblical role is to work in conjunction with the home to mold students to be Christlike. On occasion, the atmosphere or conduct within a particular home may be counter or in opposition to the Biblical lifestyle the school teaches. This includes, but is not limited to, sexual immorality, homosexual orientation, or the inability to support Biblical standards of right and wrong (Rom. 1:18-32, I Cor. 6:9). If the home environment is not in harmony with the school’s doctrinal belief in the centrality of Jesus Christ and the authority of Scripture and Biblical lifestyle, it will be difficult for the school to cooperate with the home and achieve the goal of a student becoming Christ-like. In such cases, the school reserves the right, within its sole discretion, to refuse admission of an applicant or to discontinue enrollment of a student."

Based on the evidence presented in existing news reports, as well as the statement issued by Whitefield Academy on Jan. 15, it does appear that the school's decision to expel the student in question was triggered by the appearance online of a photograph that showed her celebrating her 15th birthday, wearing a rainbow-patterned sweater and sitting in front of a rainbow-designed cake.

However, despite our requests, neither the girl's mother nor the school itself provided confirmation of that claim, or corroborating evidence for it. Although the school did clearly confirm that the publication of a photograph on social media had, in combination with a series of alleged previous code of conduct violations, proved the final catalyst for their decision to expel the student, the school has not yet publicly confirmed which photograph it was, nor provided any details about the student in question's alleged previous violations. As a result of these gaps in the available evidence, we are issuing a rating of "Unproven."

If we receive further relevant information or evidence, we will update this fact check accordingly.

Lenthang, Marlene.  "Schoolgirl, 15, is Expelled From Christian Academy for Wearing a Pride Sweater and Posing in Front of a Rainbow Cake at Her Birthday."   The Daily Mail.  15 January 2020.