Is This a Photograph of European Jews Protesting Deportation from the U.S. to Nazi Germany?

The photograph shows Otto Richter, who escaped to the U.S. from Nazi Germany, only to face deportation three years later. 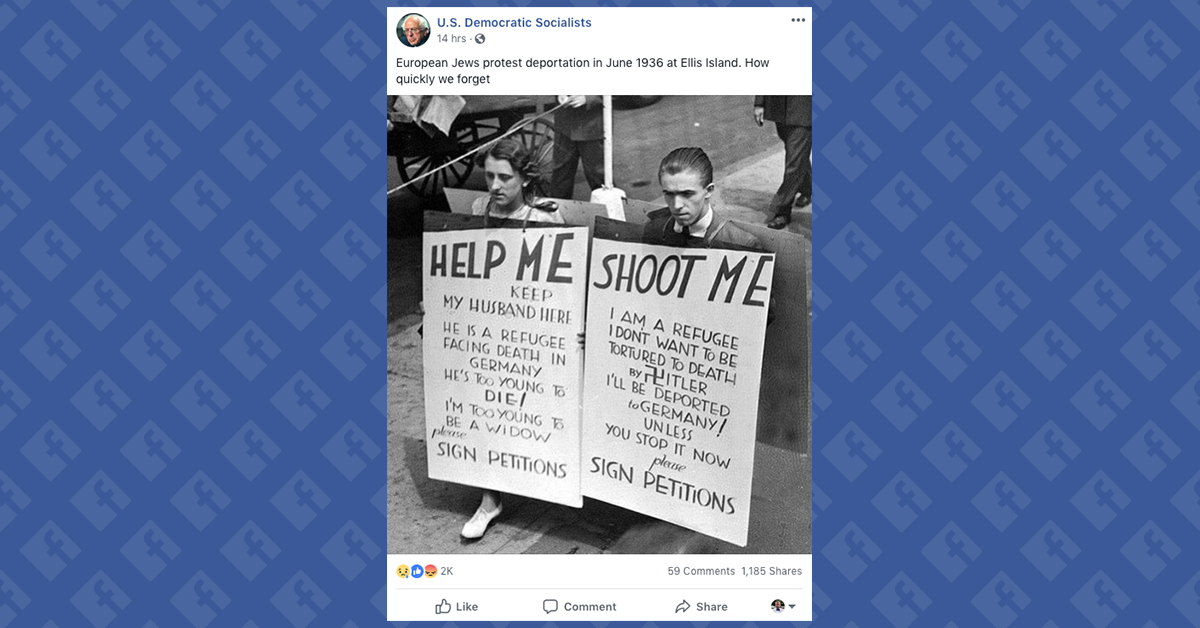 Claim:
A photograph shows a couple protesting a Jewish man’s deportation from the U.S. back to Nazi Germany.
Rating:

A photograph commonly used to illustrate the plight of asylum seekers shows a Jewish German man, along with his wife, wearing placards protesting the man’s deportation from the U.S. back to Nazi Germany, arguing his torturous death would be inevitable if forced to return: According to the stock photograph repository Alamy, the picture was taken on 12 June 1936 and credited to the German newspaper Süddeutsche Zeitung and featured a man named Otto Richter and his wife protesting at Ellis Island. A 24 December 1937 report in Seattle’s The Jewish Transcript provides a full accounting of Richter's remarkable story, which ended with his deportation to Belgium (as opposed to Nazi Germany) after significant pressure from U.S. based-advocacy groups:

In November, 1933, a young German seaman jumped ship In the harbor of Seattle. He was in the truest sense of the word a political refugee, seeking the right of asylum from a regime of tyranny and dictatorship. This young man's name was Otto Richter; born in Bremen, Germany, he was a worker and an active anti-Nazi. On the night of the burning of the Reichstag, storm troopers apprehended him and, though he had not the slightest connection with that event, beat and tortured him. The next four and a half months he spent hiding from Hitler’s secret police. [He] managed to enlist as a seaman and sail on German boat which was to call at ports in the United States. During the voyage his identity became known and officers of the ship, after abusing him, threatened to turn him over to the police on their return to Nazi Germany. These were the circumstances underlying Richter's attempted escape from Nazi tyranny to American freedom.

What has happened since? In July, 1934, during the San Francisco general strike, a vigilante raid was made on the Workers Center, and there Otto Richter was found engaged in what the Department of Labor evidently regarded as the heinous offense of helping to feed striking marine workers. He was seized and ordered deported to Nazi Germany on the technical charge that he had remained in the United States illegally. Since that time a long legal battle has been fought by the American Committee for Protection of Foreign Born to save him from deportation. And only the tremendous counterpressure of mass sentiment has secured for Otto Richter the dubious privilege of being deported to a country of his choice -— Belgium -— instead of to Hitler's sadistocracy.

Unfortunately, Belgium was subsequently invaded by Germany on 10 May 1940, surrendered 18 days later, and was occupied by German forces until 1944. Many Belgians managed to escape to the UK during that time, but it is unknown whether Otto Richter was among those who survived the war and Belgium's occupation.

Alamy.com.   Otto Richter, A German Jew, And His Wife Protest Against His Deportation To Germany by the US Immigration Authorities - Image ID: CPKT6J."     12 June 1936.