Right-leaning U.S. websites grossly misrepresented advice given to the European Court of Justice in the summer of 2019. 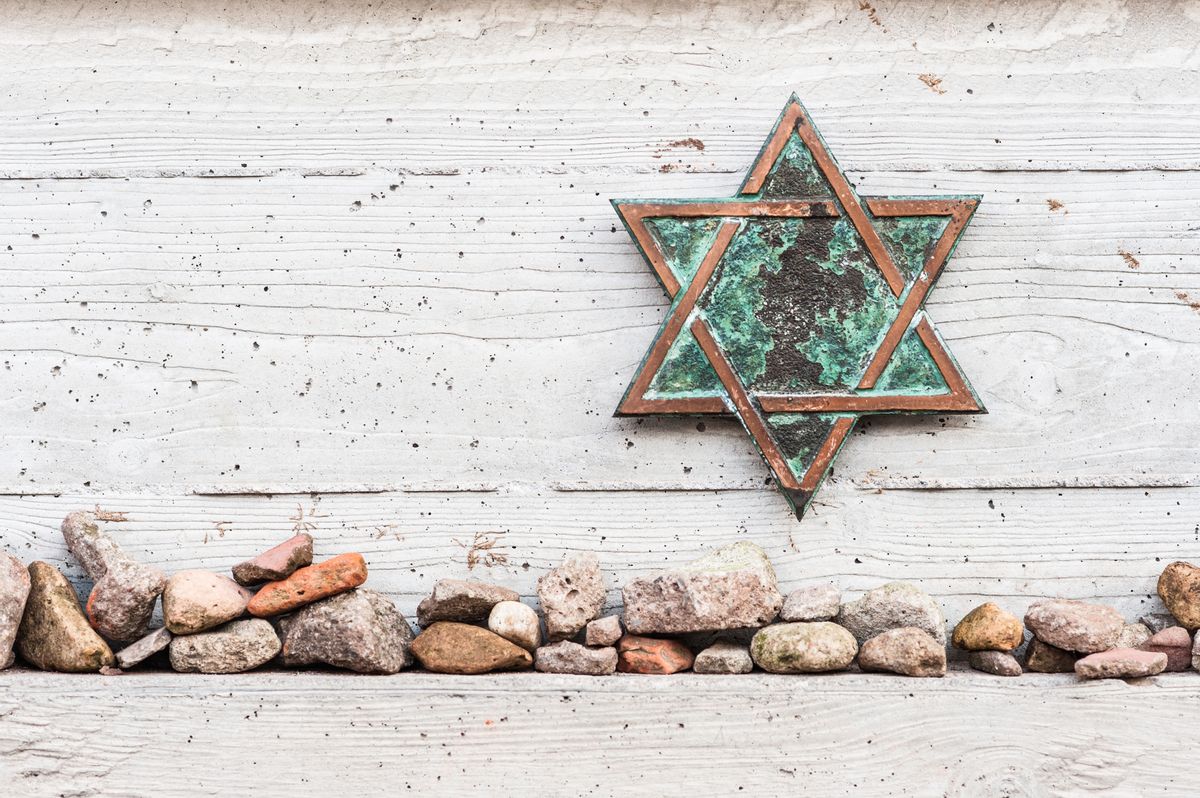 Small stone pebbles placed as an act of remembrance and respect below the Star of David. (Image Via Getty Images)

Claim:
In the summer of 2019, based on advice from an advocate general, the European Court of Justice was set to require "Jewish-made" products to be labeled as such.
Rating:

In late summer of 2019, several right-leaning U.S. websites reported, with a degree of outrage, that the European Union (EU) would soon be enforcing a rule whereby "Jewish-made" products would have to be labeled as such, following advice given by an EU judicial official.

"The European Union is preparing to add warning labels on Jewish products made in Israel. Not content with generations of antisemitism before and after the Holocaust, Europe’s ruling class apparently thinks it’s a good idea to push what is the equivalent of an in kind contribution to the boycott, divestment, and sanction movement."

The blogger Robert Spencer, who runs the Jihad Watch website, went further in his characterization of the episode, publishing a blog post with the headline, "Nazism Returns: European Union to Put Warning Labels on Jewish-Made Products." He joined the Washington Free Beacon in linking the episode to the Holocaust, writing "Europe has gone down this road before. It didn’t end well."

"In an extremely troubling move, Europe is poised to force warning labels on Jewish made products sold within Europe. Today on the broadcast, we discussed a decision out of the European Court of Justice (ECJ) that, if upheld, would mandate that Jewish and Israeli products coming out of 'settlements' and 'Israeli colonies' have warning labels placed on them for coming from so-called disputed areas."

A common thread throughout these reports was the claim that the EU was set to introduce a policy requiring products made by Jewish people in Israel to be labeled as such, if imported into the EU. That claim was false. Neither religious affiliation nor ethnic background had any relevance to advice given to the European Court of Justice (ECJ) in the summer of 2019, nor the matter being considered by the court.

As of mid-August, the ECJ had not issued a decision on the matter (contrary to the ACLJ's allusion to "a decision out of the ECJ"). Rather, one of the court's advocates general (formal advisors) discharged his duty by providing the ECJ a piece of non-binding guidance on the matter. In short, he advised that EU law required products made in Israeli-occupied territories and settlements to be labeled as such, in the interest of informing EU consumers.

We are neither agreeing nor disagreeing with the advocate general's conclusion, but in order to understand how he reached it, we must look at some important and occasionally somewhat complicated background information about EU policy towards both the Israeli-occupied territories and food labeling.

The EU has relatively strict regulations around how food must be labeled, including requiring that foodstuffs be accurately marked with their country of origin and "place of provenance," if failing to do so would deceive or mislead consumers, or deny them relevant contextual information. In that vein, the EU implemented Regulation No. 1169 in 2011.

Among other measures, Regulation 1169 stated that origin labels (or the absence thereof) must not deceive or mislead consumers, and that part of the overarching purpose of these labeling requirements was to protect the health of consumers but also to give them information about the origins of food, so that they could make consumer choices that took into account "economic, environmental, social and ethical considerations."

In November 2015, the European Commission (effectively the EU's executive branch) pulled together those strands of EU policy in an "interpretative notice" on "indication of origin of goods from the territories occupied by Israel since June 1967."

Roughly speaking, the 2015 notice stated that because the EU does not recognize Israel's sovereignty over the occupied territories, foodstuffs that originate in those territories should not be labeled "Made in Israel," since that would, in the commission's view, violate the principle that "place-of-provenance" and "country-of-origin" labels must not mislead or deceive EU consumers.

Based in part on the European Commission's 2015 interpretative notice, France's Ministry of the Economy and Finances published its own notice in November 2016. That notice informed businesses in France that, based on existing EU law, products originating in the territories of Golan and the West Bank would have to be labeled as such, and further, products made in Israeli settlements there would have to carry even more specific labels.

Two organizations disputed that notice and asked France's Conseil d'État (roughly equivalent to the Supreme Court) to annul it — the Organisation juive européenne ("European Jewish Organization") and Psagot, a company that operates a winery in the Psagot settlement in the West Bank. Both entities argued that the French government was acting beyond its powers by imposing the labeling requirements.

France's Conseil d'État ("Council of State") delayed making a decision on the notice, and instead sent the matter to the ECJ in June 2018, asking two questions:

"Does EU law and in particular Regulation No 1169/2011 of the European Parliament and of the Council of 25 October 2011 on the provision of food information to consumers, where indication of the origin of a product falling within the scope of that regulation is mandatory, require, for a product from a territory occupied by Israel since 1967, indication of that territory and an indication that the product comes from an Israeli settlement if that is the case?

"If not, do the provisions of the regulation, in particular those in Chapter VI thereof, allow a Member State to require those indications?"

The ECJ received written submissions from Psagot, the Organisation juive européenne, the French government and the governments of Ireland, Sweden, and the Netherlands, and oral arguments were heard in April 2019.

In June 2019, ECJ Advocate General Gerard Hogan, a former Court of Appeal and High Court judge in Ireland, published an opinion on the two questions presented to the court. That opinion, which is not legally binding on the court, advised that:

On June 13, Hogan laid out his reasoning in a detailed opinion that can be read in full here. In brief, he argued that:

The crux of Hogan's argument can be summarized in the following section from his opinion:

Just as many European consumers objected to the purchase of South African goods in the pre-1994 apartheid era, present day consumers may object on similar grounds to the purchase of goods from a particular country because, for example, it is not a democracy or because it pursues particular political or social policies which that consumer happens to find objectionable or even repugnant.

In the context of the Israeli policies vis-à-vis the Occupied Territories and the settlements, there may be some consumers who object to the purchase of products emanating from the territories, precisely because of the fact that the occupation and the settlements clearly amount to a violation of international law.

It is not, of course, the task of this Court to approve or to disapprove of such a choice on the part of the consumer: it is rather sufficient to say that a violation of international law constitutes the kind of ethical consideration which the Union legislature acknowledged as legitimate in the context of requiring country of origin information.

On the question of whether an individual EU member state could impose its own national requirements for mandatory "place of provenance" labeling for food originating in the occupied territories, Hogan's reasoning was fairly straightforward. One article in Regulation 1169 of 2011, according to Hogan, allowed individual member states to impose such geographic labeling requirements, but only if there was an inextricable link between the place where a food product originates and the quality of the food product. Since this quality consideration didn't arise in the specific case of the occupied territories, that provision of EU law didn't apply.

If the ECJ eventually rules in accordance with Hogan's advice, the legal consequences would be somewhat complicated, but the practical consequences less so. Since Hogan's opinion held that, under EU law, individual EU member states could not require mandatory "Israeli-occupied territory" or "Israeli settlement" food labels, the French government's 2016 notice would likely be annulled by the French Conseil d'État, just as those disputing it had requested.

However, since Hogan's opinion also held that EU law did require such labels, those labels would ultimately end up pervading throughout the EU, including in France.

Regardless of one's own personal opinion of it, Hogan's detailed analysis and advice to the ECJ was explicitly founded on the EU's long-standing policy regarding the legality of Israel's annexation of the occupied territories, and the construction of Israeli settlements there, in combination with existing EU law regarding food labeling requirements.

Far from recommending mandatory labeling of products as "Jewish" or "Jewish-made," Hogan's opinion never once even mentioned Judaism, nor the religious affiliation or ethnic background of any producer of food in the occupied territories or Israeli settlements. Nor did the French government's 2016 notice (the subject of the dispute before the ECJ) make any such references, nor did the European Commission's 2015 interpretative notice make any such references.

As of Aug. 15, the ECJ had not ruled on this issue. However, if it does rule in accordance with Hogan's advice, it will be on the basis of what the law requires, not any religious or ethnic considerations. In the introduction to his opinion, Hogan emphasized that ECJ would view the issue as "a purely legal matter," adding that "nothing in either this opinion or in the ultimate judgment of the court should be construed as expressing a political or moral opinion."

The claim that the EU was about to require "Jewish-made" labels for food products was a gross misrepresentation of the facts, and we therefore issue a rating of "False."

European Commission.  "2015/C 375/05 -- Interpretative Notice on Indication of Origin of Goods From the Territories Occupied by Israel Since June 1967."   Official Journal of the European Union.  12 November 2015.