Donald Trump Jr. and others seized upon social media posts that read, "I've thrown out over a hundred ballots for Trump already!" 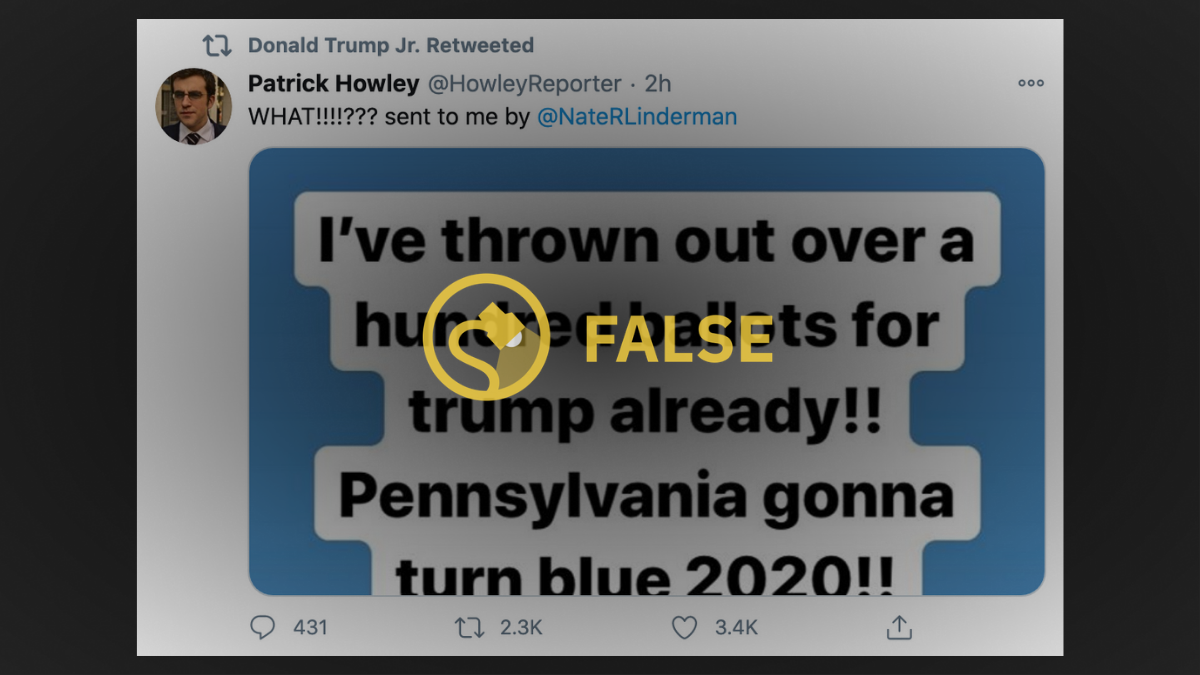 On U.S. Election Day, Nov. 3, 2020, several supporters of U.S. President Donald Trump, including his son and campaign surrogate Donald Trump Jr., promoted content on social media that they presented as evidence that a poll worker in Pennsylvania's Erie County had bragged online about discarding more than 100 ballots in favor of Trump.

Patrick Howley, who contributes to the right-leaning National File website, posted what appeared to be a screenshot from the Instagram story of a user with the handle @omg_seabass, which contained the message:

Been working at a poll station in Erie County, PA all morning. A lot of people have already voted today : ) Similar tweets, some of which named the owner of the Instagram account as Sebastian Machado, were posted by the pro-Trump commentators and activists Courtney Holland; Robby Starbuck; Jordan Rachel; and Mike Coudrey.

The right-wing website 100% Fed Up posted a story with the headline "BREAKING: Poll Worker In Erie, PA Admits To Throwing Away ‘Over A Hundred’ Pro-Trump Ballots On Instagram."

Adrian Norman, a conservative contributor to websites including The Epoch Times, said that the screenshots were strong evidence in support of broader claims of mass, Democrat-perpetrated electoral fraud, writing:

"Don't @ me about a lack of evidence of election fraud. They do it right in our faces while liberal media runs cover. The fix is IN." In reality, the posts did not constitute evidence of electoral fraud, and the claims highlighted above were false.

In a written statement, Carl Anderson, chair of the Erie County Board of Elections, told Snopes that the person behind the widely shared posts did not work in any polling station in Erie County and likely did not even live there. Anderson told Snopes that Erie County Sheriff John Loomis had initiated a criminal investigation into the posts:

Erie County has checked into the unfortunate claim being shared across social media by someone saying they are working as part of the Erie County Board of Elections and throwing out ballots. The person making the statements does not work in any way with Erie County or have any part of Erie County’s election process. In fact, the individual is not a registered voter and is not believed to be a resident of Erie County, Pa.

Erie County Board of Elections takes the integrity of the election process very seriously, and we are proud that the people working on behalf of the voters in Erie County do so in a nonpartisan, fair and unified fashion for the betterment of our community. I have spoken with Sheriff Loomis to verify if this person is a resident. Because this is now part of an ongoing investigation to pursue potential criminal charges, no further statement will be made on this matter.

It's not clear what the motivation was of the person behind the "hundred ballots for Trump" posts, but it appears that the president's son and several high-profile supporters of Trump may have fallen for a prank. In November 2016, a Twitter user with the handle @omg_seabass and the username "Seb," who bore a close physical resemblance to Machado, posted a joke about committing voter fraud in that year's presidential election, writing:

"As an undecided voter I went out of my way to vote for BOTH Clinton and Trump just to be the best kind of citizen."