Eric Trump: 'Hispanics Are Afraid of My Father Because He’ll Send Them Back to Asia'

A fake news article claimed that Eric Trump said that his father Donald Trump should send Hispanics back to Asia. 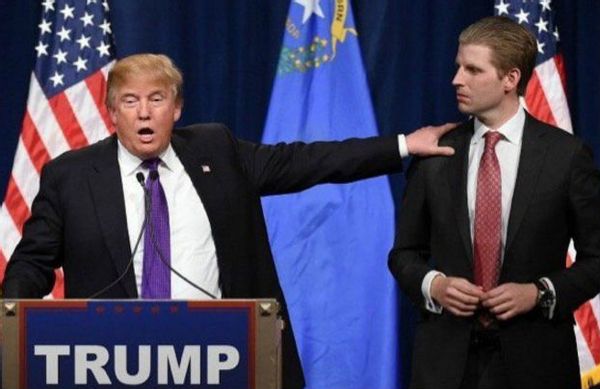 Claim:
Donald Trump's son Eric said that Hispanic people should be sent back to Asia.
Rating:

On 20 May 2016, the entertainment web site Politicops published a fake news article reporting that Eric Trump said that his father (Republican presidential candidate Donald Trump) planned to send "Hispanics" "back to Asia" when he became president:

Trump Junior continued, “Like, for instance, I was very good at geography when I was in school. But, they don’t know that. And that’s just another example of how lazy the Hispanics are as a race. And the main reason why they’re so afraid of my dad is he’s going to deport them back to Asia when he wins the election. It’s a well-known fact that fear makes people to crazy things. It’s made them come and try to suck up to me so I’d help them get in my dad’s good graces. Yeah, good luck with that.”

“My father is not a stupid man, and I can tell you he didn’t father a stupid son, either,” Eric Trump added. “And when he does deport all these lazy Hispanics back to Asia where they came from, he’ll be doing that for two reasons. The first one is obvious – we don’t need lazy people in this country. The second is that’s part of his plan of taking back American jobs from China. That’s why he’ll send most of the Hispanics back to the Chinese capital of Bangkok, which is where most American jobs are located at the moment.”

However, Eric Trump never said that his father would send Hispanics "back to Asia." Politicops, like its sister site Newslo, is a "hybrid" web site that publishes a mixture of news and fiction:

In this case, Politicops started with a real comment that Eric Trump made on a radio show explaining how Hispanics "couldn't wait" for his father to become president:

Readers of Politicops can find out which portion of the article is fake and which portion is real by clicking on the "Show Facts / Hide Facts" button included at the top of articles: