The 76-year-old musician reportedly wrote that he should have “never gone near the needle.” 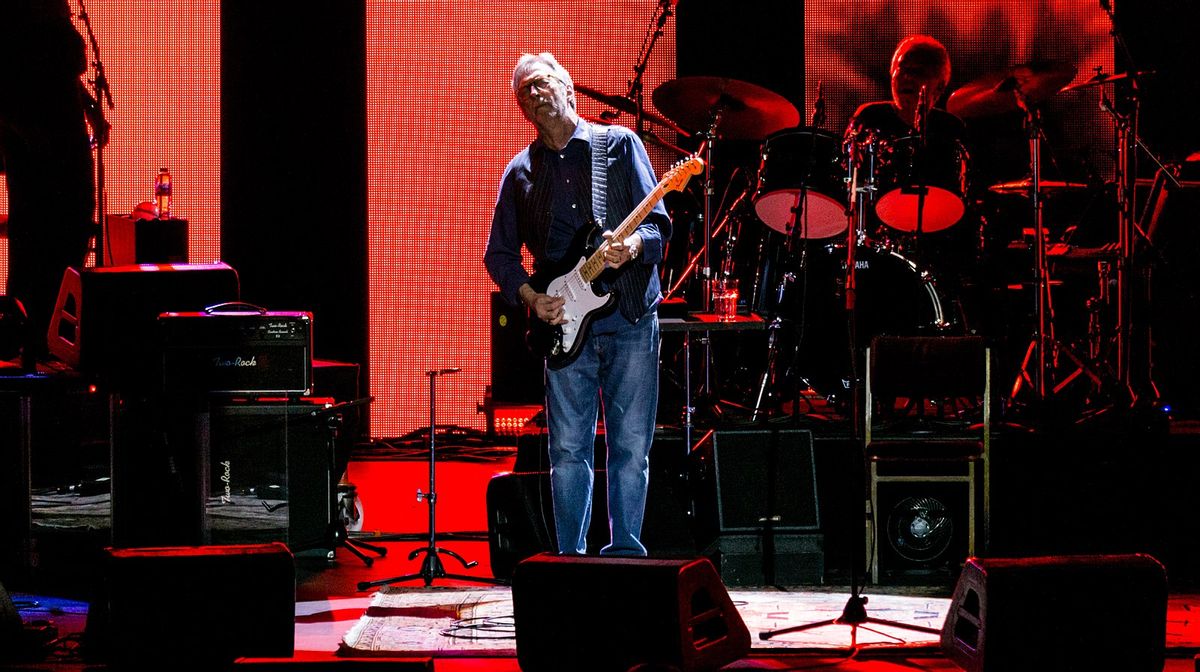 Claim:
Eric Clapton described his “disastrous” experience after receiving a second-dose of the AstraZeneca COVID-19 vaccine in a letter penned to friend and lockdown opponent, Robin Monotti.
Rating:

In May 2021, a widely shared letter purportedly written by musician Eric Clapton described the musician’s “disastrous” experience after having received the second dose of the COVID-19 AstraZeneca vaccine that left him wondering, the letter said, if he would play guitar again.

The letter was shared by Robin Monotti, a friend of Clapton’s and vocal opponent of COVID-19 lockdown measures, on the Telegram app (post archived here). It went viral after the letter was published on May 12 by America’s Frontline Doctors, an right-leaning group that has repeatedly peddled misinformation about the coronavirus pandemic and publicly spoken out against the COVID-19 vaccine.

The group claimed that Monotti, an architect and film producer, forwarded the letter to them after receiving it from Clapton. Monotti then shared the article written by America’s Frontline Doctors on Twitter.

In the letter attributed to Clapton, the 76-year-old musician supposedly said he received his second dose of the AstraZeneca vaccine in February — two months after he and Van Morrison released “Stand and Deliver,” a song protesting lockdown measures in the U.K.

Snopes readers asked our team to verify the authenticity of the letter. Monotti confirmed to Snopes that the email was sent to him directly by Clapton as a message to share with the members of his Telegram channel and group.

“I can also confirm it was indeed Eric Clapton who sent it directly to me as I met him personally, and at our meeting, we discussed the content of the message,” Monotti wrote in an email.

Snopes asked Monotti to share a screenshot of the message to confirm but we have not received a response to our request. We found that Rolling Stone reported that the publication had confirmed that the letter had been sent by Clapton, but Snopes was not able to independently verify this. We have reached out to the publication and a booking agent for Clapton but have not received a response.

In mid-June 2021, a video of Clapton surfaced on Twitter that showed the musician making similar allegations. A full version of the video was produced by Oracle Films, a self-described group of filmmakers that have “joined the fight for open debate and freedom information in the face of global government encroachment and big-tech censorship.” Access to videos posted on the platform is only made available to subscribed members.

“The vaccine took my immune system and just shook it around again. And that’s still going on. Then I read a lot of the evidence that I’ve been reading about with people who were having adverse reactions and that was on the list — you know, damage to the immune system,” said Clapton.

When Clapton was asked if he felt like he had been made aware of the potential side effects of the “second jab,” he replied, “God, no.”

“I lost the use of my hands for about three weeks, so I thought I was in real trouble. And that’s about that point I was invited by Robert Monotti to talk about it because then, and it was easy to say yes because I realized by then that I wasn’t the only one that was suffering,” added Clapton

Given that an online video shows Clapton himself repeating some of these claims and confirming he relayed them to Monotti, we have updated this article from a claim rating of “Research in Progress” to “Correct Attribution.”

BBC specialist reporter Marianna Spring referenced the video of Clapton and shared her own reporting on Oracle Films, which she said: “promotes false claims coronavirus vaccines alter DNA — and the pandemic is not real.”

However, our own investigation into the side effects of the AstraZeneca COVID-19 vaccine found that the symptoms the letter described are rare, but could be real.

“I took the first jab of AZ and straight away had severe reactions which lasted ten days, I recovered eventually and was told it would be twelve weeks before the second one...” said the letter.

“About six weeks later I was offered and took the second AZ shot, but with a little more knowledge of the dangers,” the letter continued. “Needless to say the reactions were disastrous, my hands and feet were either frozen, numb or burning, and pretty much useless for two weeks, I feared I would never play again, (I suffer with peripheral neuropathy and should never have gone near the needle.) But the propaganda said the vaccine was safe for everyone....”

The letter went on to describe meeting a member of an unnamed group who cautioned him against the vaccine, giving him a sense that “a veil had been lifted.”

“I felt like a veil had been lifted, that I was no longer alone, that it was okay, in fact essential, to hold on to my intuition and follow my heart…” the letter continued, before going on to promote a newly released song that Clapton had recorded with Van Morrison called “Where Have All the Rebels Gone?”

We found that it is true that the AstraZeneca vaccine — which has not been approved in the U.S. — comes with its own dose of reported side effects, some of which resemble the symptoms described in the letter attributed to Clapton.

The U.K. Medicines and Healthcare Products Regulatory Agency noted that the two-dose vaccine is injected into the muscle of the upper arm with the second dose given between four and 12 weeks after the first injection.

“Like all medicines, this vaccine can cause side effects, although not everybody gets them. In clinical studies with the vaccine, most side effects were mild to moderate in nature and resolved within a few days with some still present a week after vaccination,” wrote the agency.

Very common side effects include flu-like symptoms and tenderness where the injection was given, as well as fatigue, headache, nausea, chills or feeling feverish, and muscle or joint pain. Of course, it is possible that Clapton experienced what the health agency described as “uncommon” effects that may affect up to one in 100 people, which include abdominal pain and enlarged lymph nodes — or that he may have experienced extremely rare side effects described in clinical trials.

“In clinical trials there were very rare reports of events associated with inflammation of the nervous system, which may cause numbness, pins and needles, and/or loss of feeling. However, it is not confirmed whether these events were due to the vaccine,” wrote the agency.

Following a temporary distribution halt of the AstraZeneca vaccine due to its potential link between the vaccine and a rare blood-clotting condition, the European Medicines Agency argued that the benefits of slowing the spread of the novel coronavirus far outweigh the potential of severe side effects.

If the letter is authentic, Clapton joins a list of other celebrities who have spoken out against lockdown measures that have curtailed live music performances, including Ted Nugent and Madonna.

Update [May 20, 2021]: This article was updated to include comment from Monotti.

Update [June 14, 2021]: Claim rating was updated from “Research in Progress” to “Correct Attribution.”