Did Jeffrey Epstein Have a Painting of Bill Clinton Wearing a Dress in His Flat?

Snopes spoke to the artist behind the painting, who could not corroborate August 2019 news reports that cited anonymous sources. 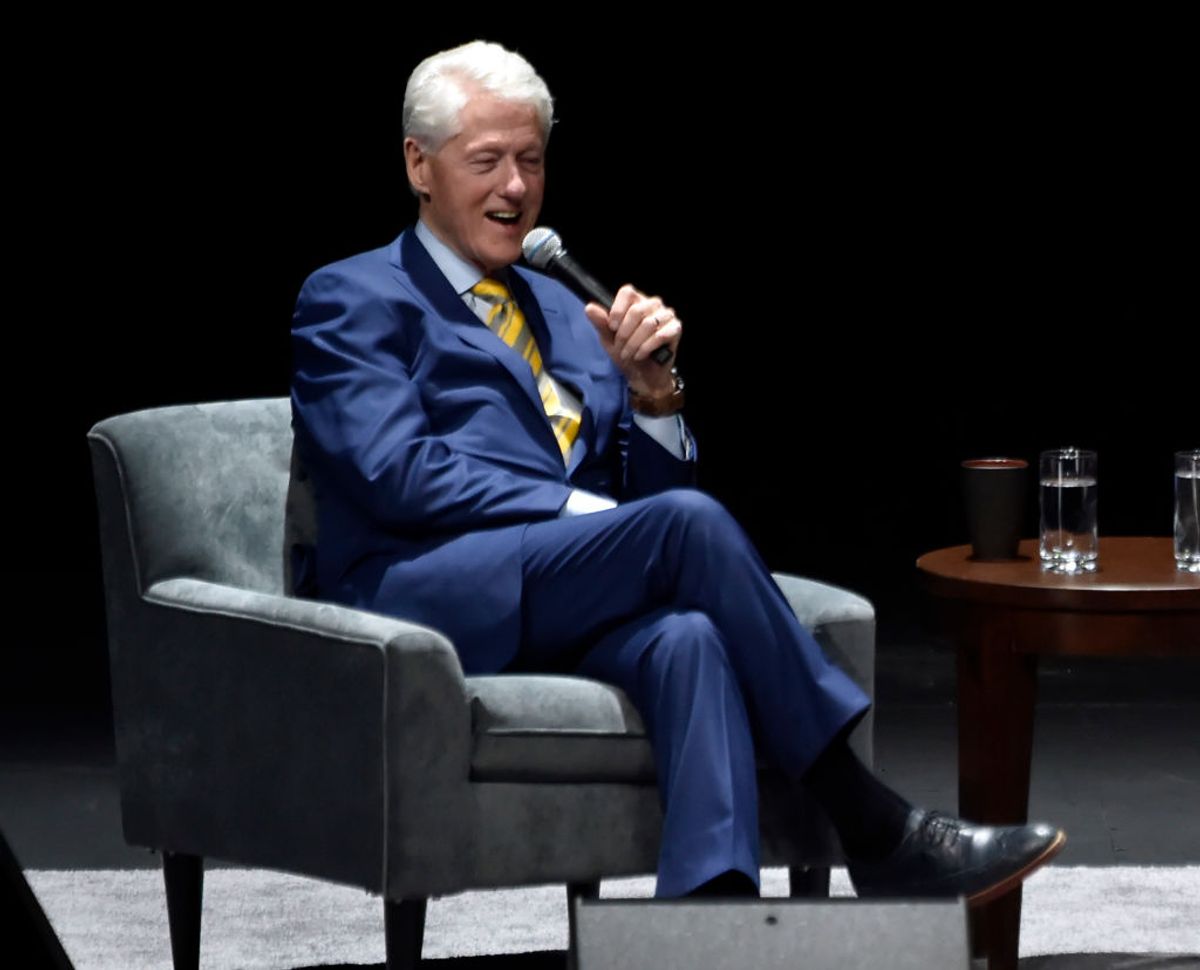 Claim:
Jeffrey Epstein once owned or displayed in his home a painting that depicted former President Bill Clinton wearing a blue dress.
Rating:

After the death of convicted sex offender Jeffrey Epstein in jail in August 2019, reports emerged that claimed to detail an unusual choice of artwork in the disgraced financier's New York City apartment some years earlier.

On Aug. 14, the Daily Mail reported that Epstein "had a bizarre portrait of Bill Clinton in a dress hanging in his Manhattan mansion," adding:

"The picture depicting the former president apparently lounging on a chair in the Oval Office, wearing red heels and posing suggestively in a blue dress redolent of Monica Lewinsky was in a room off the stairway of the Upper East Side townhouse. The dress is also strikingly similar to one worn by Hillary Clinton at the 2009 Kennedy Center Honors."

The DM has a 2012 pic that allegedly shows the inside of Jeffrey Epstein's NYC mansion. He had a painting on the wall "which appeared to be Bill Clinton wearing a blue dress & red heels... The blue dress seemed to be a pointed reference to Clinton's former intern Monica Lewinsky" pic.twitter.com/VyAnk3Bnfn

The Mail included a photograph that an unnamed source claimed to have taken at Epstein's apartment in October 2012, and that purportedly showed a view of the painting hanging on a wall through an open doorway.

Clinton was an acquaintance of Epstein's, and his representatives had sought to distance the former president from him, after Epstein was indicted on child-sex-trafficking charges in July. Epstein was awaiting trial in a New York jail when he reportedly took his own life on Aug. 10.

The New York Post appeared to corroborate the Mail's earlier reporting, citing unnamed "law enforcement sources," one of whom purportedly told the newspaper:

"[The painting] was hanging up there prominently — as soon as you walked in — in a room to the right. Everybody who saw it laughed and smirked.”

We received multiple inquiries from readers about the veracity of reports that Epstein had once owned the painting, or that it was at one time displayed in his home. So far, we have been unable to independently verify that the artwork was once in Epstein's apartment.

The artist who painted it told Snopes she did not know the identity of the person who bought it in 2012 and was unaware of any connection to Epstein until a family member told her about news reports in August 2019.

This much we know: The painting shown in the photograph published by the Daily Mail is authentic. It is entitled "Parsing Bill" and was painted in 2012 by the Australian-American artist Petrina Ryan-Kleid, while she was obtaining a master of fine arts degree from the New York Academy of Art. As of Aug. 15, prints of the painting were available to purchase from the prominent online art gallery Saatchi. A larger version of the work can be viewed here.

In April 2012, Ryan-Kleid was photographed standing next to the work at the Tribeca Ball, an annual art exhibit run by the New York Academy of Art, and a popular event for New York socialites. Ryan-Kleid told Snopes that's where an unidentified buyer purchased the original work. In an emailed statement, the artist wrote:

"In 2012, as a grad student at the New York Academy of Art, I painted pictures of Presidents Clinton and Bush as part of my Master's thesis.  When the school put on a fundraiser at the Tribeca Ball that year, they sold my painting to one of the attendees. I had no idea who the buyer was at the time. As with most of my paintings, I had completely lost track of this piece when it was sold seven years ago. So it was a complete surprise to me to learn yesterday that it wound up in Epstein's home."

Ryan-Kleid did not recall having sold the painting to Epstein, specifically, and said she first heard about any potential link to the financier from a family member who had read the August 2019 news reports mentioned above. As such, she was not able to offer corroboration for those reports, or for claims that Epstein had once had the painting in his home, or that the photograph published by the Daily Mail was in fact taken at Epstein's apartment.

Until and unless further corroborating information becomes available, we are therefore issuing a rating of "Unproven."