Why is Epicurious Ditching Beef?

The popular cooking website said it's about "sustainability and being pro-planet." 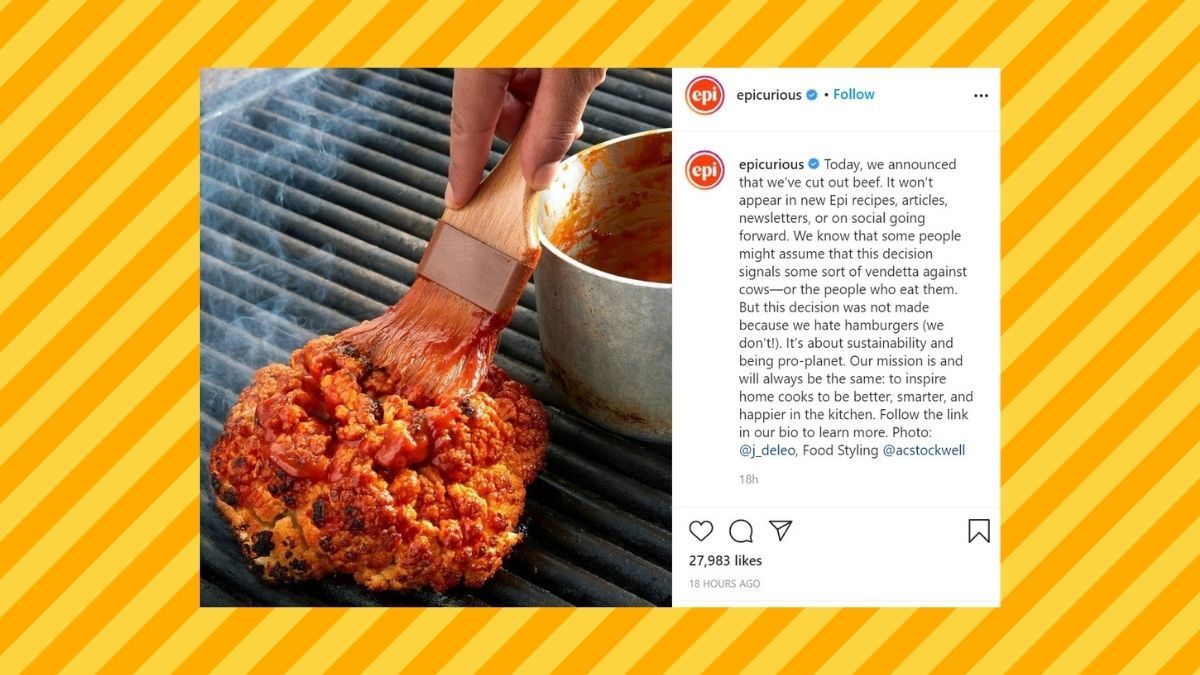 On April 26, 2021, Epicurious, a food and cooking brand created by Condé Nast, announced in an Instagram post that it would no longer publish new recipes that used beef:

Today, we announced that we’ve cut out beef. It won’t appear in new Epi recipes, articles, newsletters, or on social going forward. We know that some people might assume that this decision signals some sort of vendetta against cows—or the people who eat them. But this decision was not made because we hate hamburgers (we don’t!). It’s about sustainability and being pro-planet. Our mission is and will always be the same: to inspire home cooks to be better, smarter, and happier in the kitchen.

Epicurious also published an article that elaborated on its decision to stop publishing new beef recipes. The website noted that several studies have found that the beef industry is one of the leaders in producing greenhouse gas emissions:

For any person—or publication—wanting to envision a more sustainable way to cook, cutting out beef is a worthwhile first step. Almost 15 percent of greenhouse gas emissions globally come from livestock (and everything involved in raising it); 61 percent of those emissions can be traced back to beef. Cows are 20 times less efficient to raise than beans and roughly three times less efficient than poultry and pork. It might not feel like much, but cutting out just a single ingredient—beef—can have an outsize impact on making a person’s cooking more environmentally friendly.

Epicurious started phasing out beef content in 2019. The website has only produced a handful of beef-related recipes since then, and in April 2021 it announced it would stop publishing new beef content entirely. While previously published beef recipes can still be found on the website, Epicurious noted beef content will not be promoted on their social media feeds or newsletters.

In a second article about the decision, Epicurious attempted to answer "every question you have about cattle, climate, and why Epicurious is done with beef." Here's an excerpt from that article:

What’s so bad about beef anyway?
“Cattle contribute to climate change in multiple ways,” says Sujatha Bergen of the Natural Resources Defense Council. The first way involves the massive quantity of corn and soybeans grown to feed cattle. “It's grown using pesticides and fertilizer, which are actually produced using fossil fuels...we apply them all over the corn and the soy that we use to feed cattle.”

The second issue occurs when the cows digest that feed: Via belching and flatulence (yes, in that order), cows release methane into the atmosphere. And methane is a particularly powerful climate polluter, Bergen notes. “It’s actually about 80 times more powerful as a climate polluter than carbon dioxide,” she says. “So that’s another place where [cows are] producing lots and lots of climate pollution.”

Epicurious, of course, is not the first organization to suggest that cutting beef out of our diets would have an impact on the climate. In fact, a recent study from the University of Michigan Center for Sustainable Systems found, in simplified terms, that if beef consumption dropped by 90% it would reduce dietary emissions by 51%. This study went viral in April 2021 after Daily Mail falsely claimed that U.S. President Joe Biden was going to force Americans to eat 90% less meat.