Viral images attempting to sell pyramid-shaped features as evidence of an ancient civilization in Antarctica show nothing but mountains. 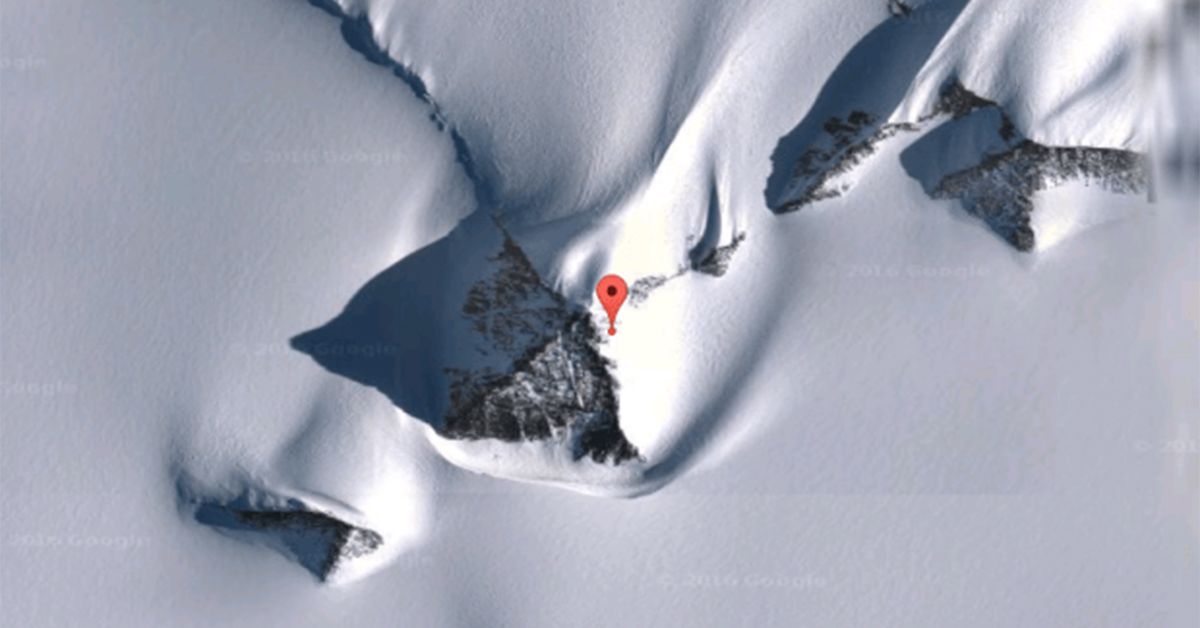 The most recent version of this story comes from a post filed to the "consciousness" section of new-age web site "Earth. We Are One" (EWAO), which suggests that a photograph from a mountain range first discovered in 1935 is now breaking news:

Recently, Google Earth satellite imagery discovered a constellation of three snow-covered pyramids in Antarctica. Scientists and researchers are, admittedly, rather taken aback. Two of the three pyramids are about 10 miles inland, while the third is directly near the coastline.

The implications? Well, this discovery could end up re-writing our entire history. No research has ever mentioned a civilization in Antarctica, much less one with the technological know-how to construct pyramids. So, how did these pyramids get there?

Without actually answering that question, EWAO then lists a litany of undeniably cool, but wholly irrelevant facts about the geologic history of Antarctica, even including some that are not completely incorrect:

Over millions of years, Antarctica has drifted from a position closer to the equator to its present perma-frozen location.

What EWAO describes here is plate tectonics — the foundational theory of modern geology that has been well accepted since the 1960s and was first presented as "continental drift" in the early 1900s. In fact, one of the first suggestions that Antarctica may have been warmer in the past came from the discovery of 250-million-year-old fossils of plants in Antarctica by British explorer Robert Falcon Scott during a 1912 expedition, which later provided support for the concept.

EWAO then unnecessarily cites a scientist at the British Antarctic Survey who (factually) stated that there was lush vegetation on the continent 100 million years ago. EWAO presumably does this so they can write the words "The British Antarctic Survey backs this up", also presumably hoping that the reader wouldn't catch on that the Survey was talking about long-established science rather than the complete redefinition of evolutionary history and wholesale rejection of the geologic and archeological records.

The final bit of supporting evidence for an ancient civilization capable of making 4,000-foot-tall structures (which, it should be noted, would be a remarkable feat given the fact that this would be ten times the height of the Great Pyramids of Giza) is information provided by a series of expeditions to Antarctica's Lake Vida, which, in EWAO's words, "discovered unexpected microbial lifeforms trapped under a 65-foot-thick sheet of ice [that] resemble descendants of microorganisms from much warmer climates".

The discovery of these organisms was notable, given the extreme environment and their ability to reproduce once thawed, but not because of some purported resemblance to more temperate species of bacteria. One could make the equally factual argument that penguins share resemblance with animals from a warmer climate, because as birds they evolved from theropod dinosaurs that inhabited an ice-free Earth. Such an observation would be equally useless.

Despite the irrelevance of the allegedly supporting information provided, EWAO concludes:

About 100 million years ago, someone was building pyramids on the Antarctica that was then located at the equator.

Ignoring the fact that Antarctica has been in its present latitude for the past 100 million years (its most recent warm periods were caused by climatic factors, not tectonics), the question EWAO should have been answering is this: Why would a mountain look like a pyramid?

The answer to that question is that pyramidal peaked mountains, also called a horn (as in Matterhorn), are a feature of glaciated areas; they form from the convergence of glaciers that scour the sides of an existing landmass. This is a great explanation for the pyramid shaped mountains highlighted by EWAO, as they exist at the convergence of multiple ice sheets on a continent noted for its nearly 100 percent glaciated surface.

Therefore, we rank this claim as false because, as University of California, Irvine geology professor Eric Rignot told LiveScience in 2016: "This is just a mountain that looks like a pyramid."

Earth. We Are One.   "Enormous Pyramid Just Discovered in Antarctica Could Change How We Look At History Forever."     18 August 2017.