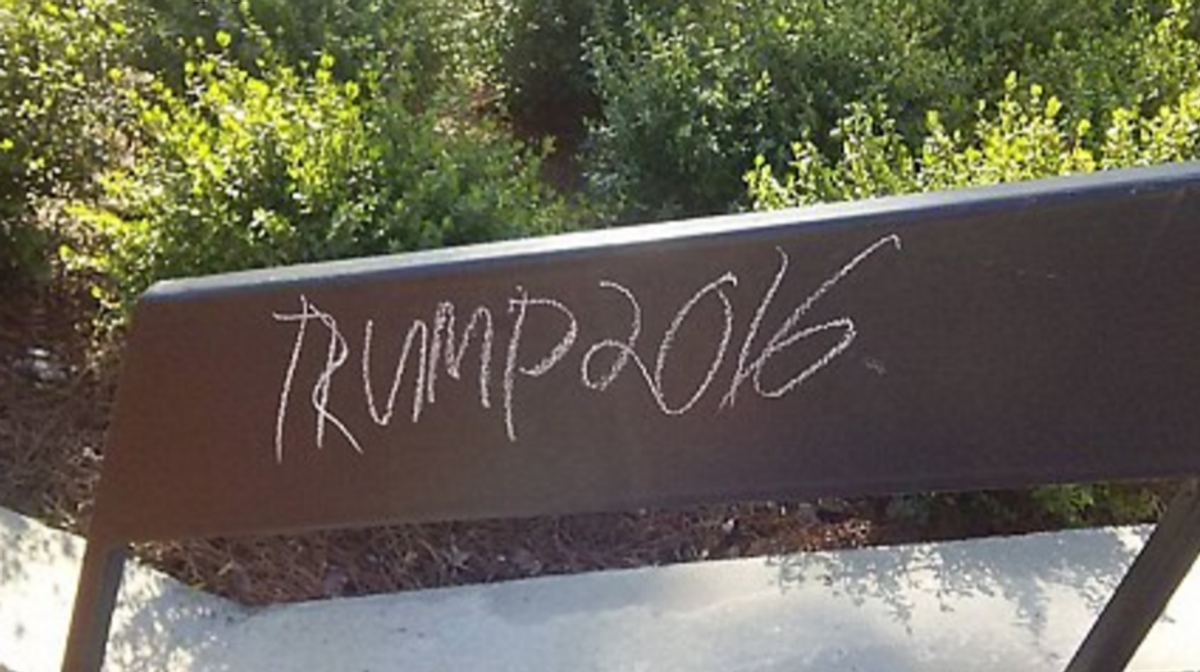 Students at Emory University gathered in protest after pro-Trump graffiti appeared overnight; administrators investigated the graffiti as it appeared outside designated areas for chalk markings.

"Emergency counseling" was offered to or demanded by students; Emory students complained that their "safe spaces" had been violated; students were afraid of or traumatized by the chalk markings.

On 24 March 2016, social media users began sharing articles reporting that students at Emory University were "traumatized" by graffiti promoting Donald Trump, and that "emergency counseling" had been offered to those who felt their "safe spaces" had been violated. Many Twitter users linked to an article published about the controversy by the Emory Wheel, the university's student-run newspaper. The term "counseling" only appeared in the item's comments section, and "safe spaces" was included as a paraphrase (meaning the purportedly oversensitive students invoking the concept hadn't actually used the words):

Grievances were not restricted to shortcomings of the administration. “[Faculty] are supporting this rhetoric by not ending it,” said one student, who went on to say that “people of color are struggling academically because they are so focused on trying to have a safe community and focus on these issues [related to having safe spaces on campus].”

What the article (prior to an update) described was a political protest inspired by the Trump graffiti:

Students protested yesterday at the Emory Administration Building following a series of overnight, apparent pro-Donald Trump for president chalkings throughout campus. Roughly 40 students gathered shortly after 4:30 p.m. in the outdoors space between the Administration Building and Goodrich C. White Hall; many students carried signs featuring slogans such as “Stop Trump” or “Stop Hate”[.]

A 23 March 2016 Mediate article was one of the first that reported students were offered not just counseling, but emergency counseling (as if some major catastrophe had occurred on campus):

A group of students at Emory University led a campus-wide protest after someone wrote ‘Donald Trump 2016’ in chalk across campus, leading the university to provide “emergency counseling” sessions in response. According to student paper The Emory Wheel, the triggered students protested outside the administration building chanting, “You are not listening! Come speak to us, we are in pain!”

However, the sole citation for the "counseling" claim was the same Emory Wheel article which, again, made no mention of any such offer or demand. Britain's Daily Mail repeated the "emergency counseling" claim, but that site also linked to Emory University content, which itself made no such statement:

After the chalk markings started to appear, and pictures began appearing on The Tab, student organizations offered counselling to anyone who may have been impacted by what they had seen.

Mediaite linked to Fox Sports, which claimed (in its own words) that "[t]he student government association is OFFERING EMERGENCY COUNSELING FOR STUDENTS TRIGGERED BY THE TRUMP 2016 CAMPUS CHALKINGS." Fox Sports then reproduced an e-mail sent by student government representatives (i.e. students, not adult faculty or administrators) offering support for events, not counseling:

That being said, by nature of the fact that for a significant portion of our student population, the messages represent particularly bigoted opinions, policies, and rhetoric directed at populations represented at Emory University, we would like to express our concern regarding the values espoused by the messages displayed, and our sympathy for the pain experienced by members of our community... It is clear to us that these statements are triggering for many of you. As a result, both College Council and the Student Government Association pledge to stand in solidarity with those communities who feel threatened by this incident and to help navigate the student body through it and the environment of distrust and unease it has created. To that end, Emergency Funds within the College Council monetary policy were created to provide time-sensitive funds during circumstances involving discrimination based on race, gender, sexual orientation, religion, and such funds are available to any student organization looking to sponsor events in response to this incident.

In context, it seemed much more likely that the e-mail described protest events, not counseling (which was never originally insinuated). Some attention focused on Emory's efforts to identify the rogue Trump chalker, but the Emory Wheel made clear that the actions were in dispute because use of chalk to mark structures is only permitted on certain campus areas. The Trump chalkings appeared campus-wide, and therefore broke rules about acceptable use of chalk on campus:

The University will review footage “up by the hospital [from] security cameras” to identify those who made the chalkings, Wagner told the protesters. He also added that if they’re students, they will go through the conduct violation process, while if they are from outside of the University, trespassing charges will be pressed.

While it was true that several dozen Emory University students protested in response to the Trump chalk scrawlings, we were unable to substantiate that anyone (student or administrator) offered emergency counseling, or, indeed, counseling or any sort. Neither did anyone seek counseling that we could see, and no students complained "safe spaces" were violated (though at least one said they felt "unsafe"). The Emory University media brouhaha was one of several distorted claims of rampant political correctness on college campuses and elsewhere, with several (embellished) details repeated by major outlets such as the Daily Mail, Mediaite, and the Washington Post. Just a few weeks before the Emory controversy, several web sites inaccurately claimed students were offered counseling over the presence of mini sombreros at a party. Another viral Facebook post claimed Captain America was deemed offensive and banned; a Brooklyn principal was falsely accused of banning the Pledge of Allegiance, Thanksgiving, and Christmas; and another faux outrage popped up over a satirical poster claiming popular Halloween costumes were not politically correct and kids wearing them would be denied candy. In nearly all such claims, details of the actual controversy were obfuscated by embellished elements framing students or schools as overly sensitive. While it was true some students of color expressed that the large number of Trump chalkings made them uneasy, most simply gathered to express their political distaste for the presidential candidate and his platforms on issues of race and religion. On 25 March 2016, Emory protest organizer Jonathan Peraza contacted us and linked to a 24 March 2016 statement about the controversy issued by involved students on campus:

Subsequent media reports have tried to frame this case as one about “coddled” and “oversensitive” students; however, LET US BE CLEAR: We are not scared of the chalk. We are not mad about being politically challenged. We are rightfully angry because we also exercise our first amendment right to freedom of speech and there are people on this campus, and in this country, who as a result choose to threaten us and twist the truth to protect their own bigotry. Firstly, we are not asking that these students censor their politics, nor are we asking that administration chooses to intervene in student politics. Rather, what we are asking for is equality and equity -- we want a streamlined, consistent method of communication to deal with instances of unrest on Emory's campus. This means race, color and economic status should not determine whether or not the University needs to be prompted to send out a response of acknowledgement of events. Secondly, we ask the Emory University Student Body and individuals nationally to fight for our right of freedom of speech the way they have for Trump supporters.