Is Emmanuel Macron's Wife One of His Former High School Teachers?

A Reddit post claimed that French President Emmanuel Macron began a relationship with his future wife when he was 15 and she was 39 years old. 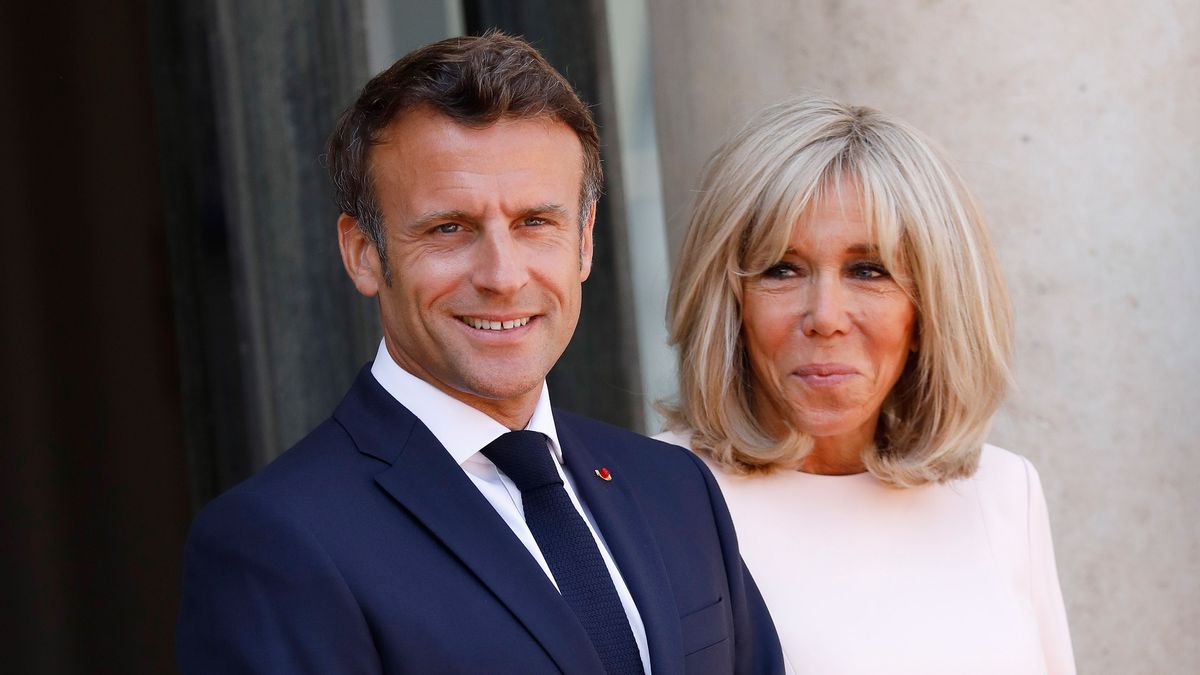 France's President Emmanuel Macron and his wife, Brigitte, at the Elysee Palace, on July 18, 2022, in Paris, France. (Photo by Antoine Gyori/Corbis via Getty Images)

Claim:
French President Emmanuel Macron is around 25 years younger than his wife, Brigitte, and they started dating when he was a teenager and she was one of his teachers. Her daughter, Laurence, was once one of his classmates, and later became his stepdaughter.
Rating:

This rumor appeared in a Reddit post. The central parts of the claim are true. One minor factual correction to the post is that Macron has one stepson and two stepdaughters, not two stepsons and one stepdaughter.

On Dec. 19, 2022, a Reddit user posted the following claim: "French president Emmanuel Macron (44) is 25 years younger than his wife (69). They first met when he was a 15 year-old schoolboy and she was his teacher. His first stepson is 47 years old, the second is 45 years old and his stepdaughter (also his classmate at high school) is 44 years old." The thread appeared on the r/Damnthatsinteresting subreddit.

All of this is true, with the exception of small inaccuracies regarding their stepchildren.

According to The Independent, Macron met his future wife, Brigitte Trogneux, when he was a 15-year-old schoolboy and she was a teacher at La Providence, a private school in Amiens, northern France. At the time, Trogneux was "a 39-year-old married mother-of-three." Her first husband was a banker named Andre Louis Auzière, who died in 2020.

The article cited the book "Emmanuel Macron: A Perfect Young Man," which was written by Anne Fulda.

According to the reporting, Macron's parents, who were interviewed for Fulda's book, originally thought that he had been dating Trogneux's daughter, Laurence, who was Macron's classmate. However, the truth that Macron was dating his much-older teacher came out through a "family friend," which resulted in his parents pulling him out of the school.

The Independent published, "The pair eventually married in 2007 when he was 29 and she was 54 years old. Becoming a very youthful stepfather to her three adult children, he told them at the wedding reception: 'Thanks for accepting us, a not-quite-normal couple.'"

In our examination of the Reddit user's post, we noted that the "25 years younger" figure had been rounded up from the exact age difference of 24 years, eight months, and eight days.

Macron has three stepchildren from Brigitte's first marriage, as the post said. However, according to elysee.fr, the official website for the French president's residence, Élysée Palace, two of the stepchildren are stepdaughters and one is a stepson. The Reddit post inaccurately claimed the opposite was true, and also included incorrect information about some of their ages.

Sébastien was born in 1975 and is Macron's only stepson. His two stepdaughters are Laurence and Tiphaine, who were born in 1977 and 1984, respectively.

Bowcott, Owen. "Brigitte Macron's Daughter Hits Back over 'sexist and Ageist' Attacks." The Guardian, 14 May 2017, https://www.theguardian.com/world/2017/may/14/brigitte-macron-daughter-hits-back-sexist-ageist-attacks.

flyingcatwithhorns. "French President Emmanuel Macron (44) Is 25 Years Younger than His Wife (69). They First Met When He Was a 15 Year-Old Schoolboy and She Was His Teacher. His First Stepson Is 47 Years Old, the Second Is 45 Years Old and His Stepdaughter (Also His Classmate at High School) Is 44 Years Old." r/Damnthatsinteresting via Reddit.com, 19 Dec. 2022, www.reddit.com/r/Damnthatsinteresting/comments/zpu4b8/french_president_emmanuel_macron_44_is_25_years/.