Was Emily Jones Decapitated by a Somali Migrant?

The tragic story of a 7-year-old's killing was spun into racist misinformation shared on neo-Nazi websites. 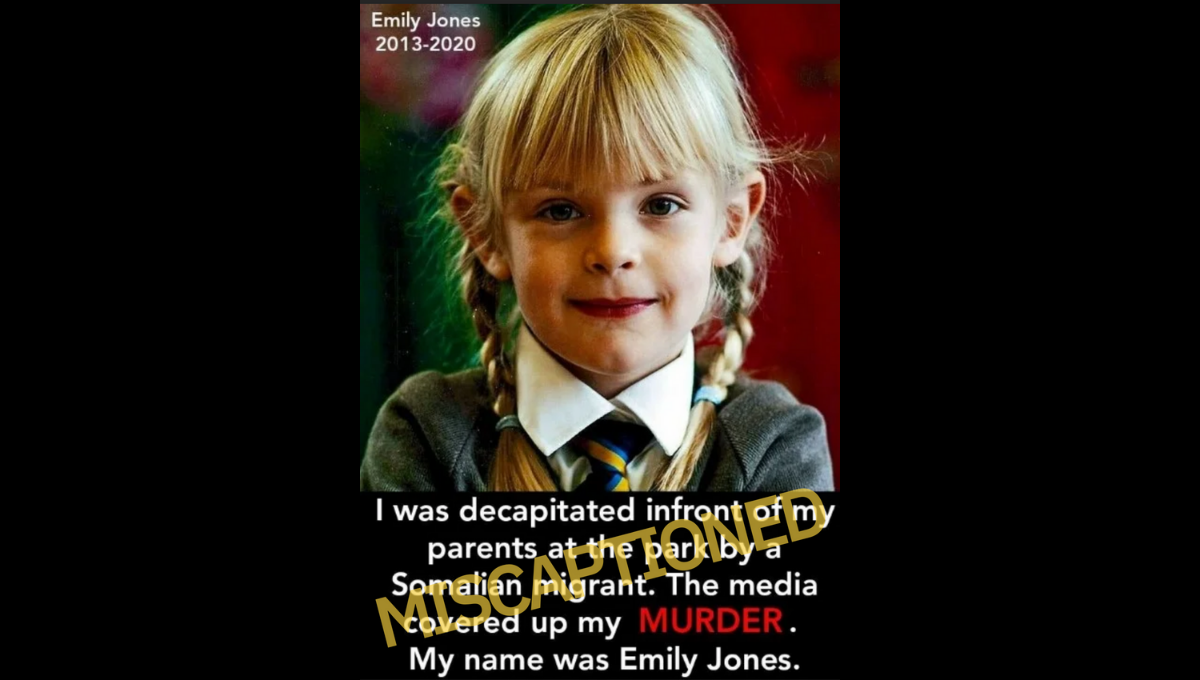 Claim:
A 7-year-old named Emily Jones was decapitated in England by a Somali migrant.
Rating:

Emily Jones, 7, was killed by a stranger at a park in England in March 2020. A 30-year-old woman was arrested at the scene and, as of this writing, is being held under the Mental Health Act.

Jones was not beheaded.

Police described the person arrested as a 30-year-old woman with a history of mental problems. Claims that this person was a Somali migrant are based on unfounded speculation.

On March 22, 2020, a young girl named Emily Jones was killed by a stranger while playing in a park in England. BBC News reported at the time:

A seven-year-old girl has died after being stabbed by a stranger in a park.

The girl suffered serious injuries in the attack at Queen's Park in Bolton at about 14:30 GMT, Greater Manchester Police said.

A force spokesman said despite the "best efforts of her family and medical responders, she died a short while later".

A 30-year-old woman, who was not known to the family, was arrested at the scene on suspicion of murder.

Initial reports about Jones' death did not identify the woman who was arrested. With this information unknown, some social media users attempted to fill in the blanks by claiming, without evidence, that Jones had been killed by a Somali migrant. When the local news outlet Manchester Evening News reported that Jones had suffered a serious stab wound to her neck, this gruesome detail soon morphed into the false claim that this little girl was beheaded.

By May 2020, a meme containing a photograph of Jones and a piece of text claiming that she had been "beheaded" by a Somali migrant was circulating on social media: A 7-year-old named Emily Jones was truly killed by a stranger in a park in England. She was not beheaded, as claimed in this meme, and police did not identify her killer as a Somali migrant. This claim is based on little more than speculation and is being spread by neo-Nazi websites such as The National Vanguard.

Although police have not released the identity of the woman arrested, they did say that the approximately 30-year-old woman had a history of mental illness. As of this writing, she is being held at a secure facility under the Mental Health Act.

A 30-year-old woman, who was not known to the family, was arrested at the scene on suspicion of murder.

Assistant Chief Constable Russ Jackson said officers were "working to understand the motive for this completely random and brutal attack".

"A woman who was not known to the family was detained by a member of the public and then arrested by the police," he said.

"We understand that the woman has some history of mental illness and we are working to understand if this played any part in her motive."

The Facebook page for the Greater Manchester Police force posted a tribute from Jones' family:

McDonnell, Seamus; Oldfield, Paige.   "This is Emily, 7, Who Was Stabbed to Death in a Bolton Park. Her Devastated Parents Have Paid a Heart-Wrenching Tribute to Her."     Manchester Evening News.   25 March 2020.