Yes, Elon Musk Sent Starlink Terminals to Ukraine, But at What Safety Cost?

One expert who weighed in noted that satellite communications may pose more danger than safety. 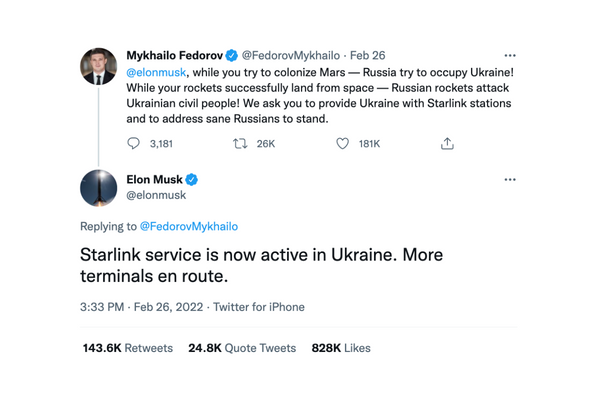 Starlink systems arrived in Ukraine less than a week after Russia invaded the neighboring nation in February 2022. The move came after Mykhailo Fedorov, Ukraine’s vice prime minister, took to Twitter on Feb. 26 — two days after the invasion — to ask SpaceX CEO Elon Musk to provide the novel satellite telecommunications system to the nation.

That same day, Musk announced on Twitter that the satellite internet service was “now active in Ukraine” with more terminals en route.”

Two days later on Feb. 28, Fedorov posted a photo to the social media platform that displayed more than a dozen black boxes in what appeared to be a military type vehicle:

Starlink offers high-speed broadband access through a constellation of satellites in low Earth orbit that, if all goes according to Musk’s plan, will one day provide coverage anywhere on the planet, primarily in underserved areas and remote locations. The request by Federov came after internet outages were reported in Ukraine, and Russian government officials told its media to only publish information from official Russian sources.

It was not clear where the Starlink systems were sent or what they would be used for, but as the BBC pointed out, the telecommunications system is likely to be used by the government, particularly as internet access is expected to get more difficult amid the ongoing war. Snopes contacted a representative with SpaceX to for further information about what the terminals would be used for, but did not receive a response as of this writing. We will update the article accordingly if we hear back.

Although access to the internet has been dubbed by many a basic human right, the use of satellite systems during a conflict could pose more danger than safety. As researcher John Scott-Railton of The Citizen Lab, an academic research lab focused on digital threats, pointed out in a Feb. 26 Twitter thread, “Russia has decades of experience hitting people by targeting their satellite communications.”

Satellite communications systems send signals in all directions so as to reach the satellite with which they are trying to communicate through, making them easy targets for enemies. In 1996, for example, Chechen president Dzhokhar Dudayev was killed by way of a Russian missile strike after Russian aircraft reportedly found the signal from his satellite phone.

“If you don’t understand them, people die needlessly until they learn & adapt. This has happened again. And again.”

It’s not the first time Musk has deployed Starlink for a humanitarian cause. In January, the SpaceX company sent 50 terminals to Tonga after a volcanic eruption and tsunami rocked the island nation in January, reported Reuters.

On March 9, Fedorov announced on Twitter that a second shipment of Starlink stations had been delivered to Ukraine. In a comment, Musk said that his company had also sent "power adapters for cigarette lighters, solar/battery packs and generators for places where electricity is not available."

“COVID-19 Exposes Why Access to the Internet Is a Human Right.” OpenGlobalRights, https://www.openglobalrights.org/covid-19-exposes-why-access-to-internet-is-human-right/. Accessed 2 Mar. 2022.

Update [March 10, 2022]: Article was updated to include a second delivery of Starlink stations and a statement from Musk.