We looked for the origins of a rumor that claimed Twitter owner Elon Musk was pictured shaking hands with Google CEO Sundar Pichai.

A lettering with the logo of Google is stuck on a glass pane in the press center of Koelnmesse. (Photo by Rolf Vennenbernd/Picture Alliance via Getty Images)

In early January 2023, readers asked if a rumor was true that said Twitter owner Elon Musk had bought Google. However, this claim was false.

At the same time that this rumor was beginning spread, readers were flocking to one of our past stories about another rumor that claimed Musk's father, Errol, once owned an emerald mine.

The rumor about Musk buying Google started on Jan. 8 when the user or users behind a YouTube channel named Elon Musk Zone posted a new video with the title, "Elon Musk: 'I OFFICIALLY Bought Google.'"

The video began by announcing, "Tesla billionaire Elon Musk has shocked many after he officially bought Google."

The thumbnail image for the video showed a doctored picture of Musk with Google CEO Sundar Pichai, as HITC.com noted in its reporting about this rumor. 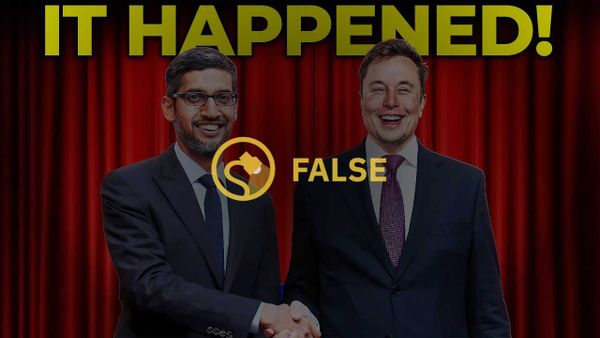 The thumbnail image for the video was fake.

A disclaimer buried in the YouTube video's description read somewhat like those that we've see on websites that claim to publish satire and parody. However, this disclaimer did not mention the words "satire" or "parody."

Instead, the disclaimer only said the following: "Our channel is not associated with Elon Musk in ANY way and is purely made for entertainment purposes, based on facts, rumors, and fiction. Nothing in this video is financial or medical advice."

The beginning of the fictional story that was presented in the video was narrated as follows:

Tesla billionaire Elon Musk has shocked many after he officially bought Google. What is Musk up to in the tech industry, given his pace of buying tech companies? Will Sundar Pichai survive as Google's CEO after Musk's takeover, or will he be fired like the former Twitter CEO, Parag Agrawal? Will Google be better off or worse off after Musk's takeover? Join me today in this video where we will explore how Elon Musk has officially bought Google.

In your wildest dreams, would you have ever thought that Elon Musk could buy the world's largest search-engine company, Google? Well, I can bet you never did. However, let's just face it. Elon Musk is full of surprises, and we should be expecting more from the tech guru.

So, Elon Musk has just lost his first position as the world's richest man in the world to LVMH's Bernard Arnault. Yet, to this tech nerd, net worth is just a number. He has a lot more wealth than we can imagine. Nevertheless, his most recent purchase has left many surprised as to his capabilities. Just recently, Elon Musk successfully bought and freed the bird (Twitter) from the deal that drew a whopping $44 billion from his pocket.

We all know the Twitter story, and how it wound to Elon buying it. But one thing is clear after the purchase of the American microblogging social media site: Elon Musk is hailed as the hero of free speech.

If readers see any questionable YouTube videos in the future, we recommend completely reading through the description of the video as well as checking the "About" page for the channel. One or both of those places might include a disclaimer much like the one we found under the fictional video from Elon Musk Zone.