“I have nothing to say,” she reportedly told journalists at the time. 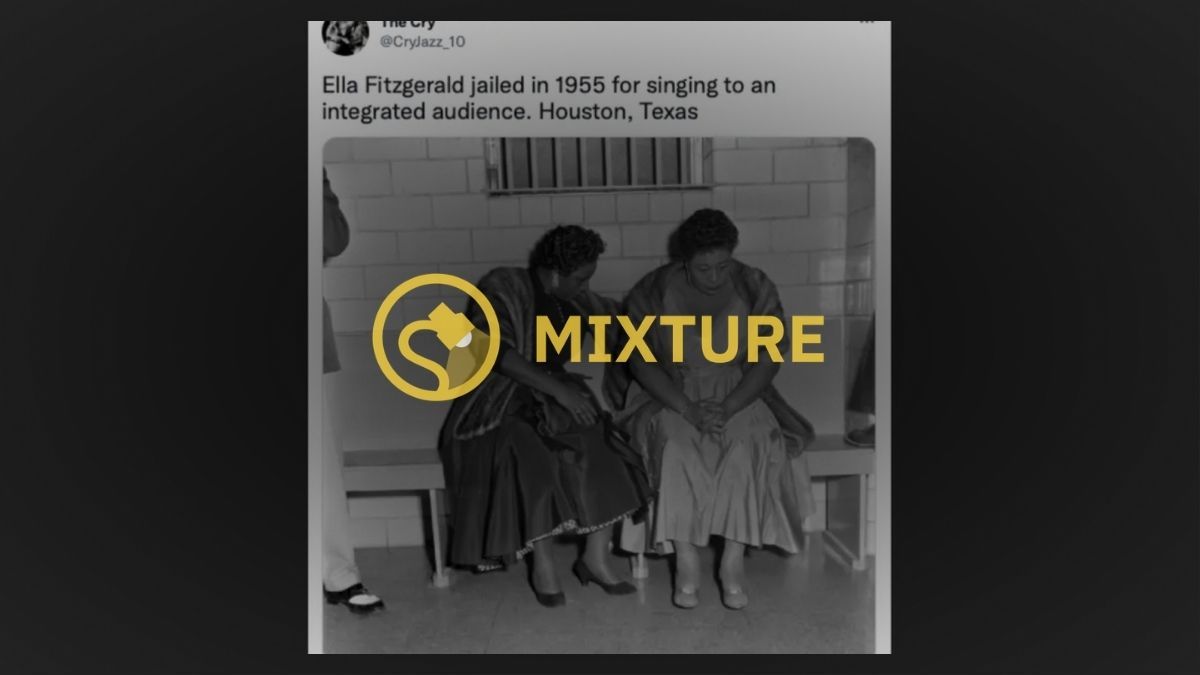 Claim:
A photo taken in 1955 depicts Ella Fitzgerald in police custody for allegedly violating segregation laws by singing to a mixed-race audience.
Rating:

The photo indeed showed Ella Fitzgerald in police custody in 1955 after she and other performers held a concert for a mixed-race audience at the Houston Music Hall. Afterwards, at least one documentarian described Fitzgerald's arrest as "racially motivated," and jazz legend Norman Granz — who was also arrested — said he believed police targeted them because of the integrated audience. On paper, however, Fitzgerald wasn't arrested on suspicion of violating segregation laws. Rather, law enforcement officers in Houston arrested and temporarily held her and four other people at a police station because they said the entertainers had gambled illegally.

For years, a photograph supposedly showing American jazz singer Ella Fitzgerald in jail for singing to a mixed-race audience in 1955 has circulated online. A Facebook account that describes itself as her official fan page shared the photo in October 2020, for example, and Snopes came across it via the below-displayed meme in February 2022. It was true that the photo showed Fitzgerald (right) in police custody in October 1955 after she and other performers held a show for an integrated audience at the Houston Music Hall, according to the Houston Public Library's digital archives and other evidence. Georgiana Henry, the jazz singer's assistant, was the person photographed sitting next to her (left), as outlined in the center's description of the photo.

But the photo's caption asserting the nature of Fitzgerald's arrest deserved extra context. On paper, police arrested her and other performers for supposedly breaking gambling laws. For those reasons, we rate this fact check a "Mixture" of truth and falsehoods.

At the time of the 1955 incident, public spaces in Houston were indeed largely segregated by race, despite the fact that racial segregation laws were abolished the year prior.

However, Jean-Baptiste Illinois Jacquet (a tenor saxophonist from the city) and jazz producer Norman Granz, who was Fitzgerald's manager, did not want racial segregation in jazz spaces, according to a 2010 piece by Aimee L’Heureux for Houston History Magazine. They considered jazz "a vehicle for social change to fight discrimination and segregation" with the potential to change people's racist views.

So, while setting up a national tour featuring performers such as Fitzgerald, Jacquet and Dizzy Gillespie, Granz included a "non-segregation clause" in contracts with venues, according to All About Jazz, a website dedicated to jazz history and culture. That applied to the Houston Music Hall, where, according to L’Heureux:

Granz removed the racial signs denoting the “white” versus “black” restrooms, and refused to pre-sell tickets in case patrons attempted to section off parts of the venue for whites only. Maintaining his spokesman role, Illinois Jacquet discussed the reasons for not pre-selling tickets at Texas Southern University, local high schools, and on the radio. Granz and Jacquet intended for the gig to become the first major concert in Houston with a desegregated audience.

Fearing problems because of the so-called "forced integration" at the October 1955 concert, Granz hired eight Houston Police Department officers as guards, according to L’Heureux. That article went on:

Although no crowd disturbances or violence occurred that evening, for Ella Fitzgerald, her personal assistant Georgiana Henry, Dizzy Gillespie, and Illinois Jacquet, trouble was waiting in the wings. Houston’s vice squad, headed by Sergeant W. A. Scotton, planned and operated a racially motivated sting mission to arrest the performers. Five officers in regular clothes obtained backstage access and burst into Ella Fitzgerald’s dressing room with guns in hand. In the corner, Jacquet and Gillespie played craps, while Fitzgerald and Henry drank coffee in between sets.

In other words, a group of police officers that was supposedly tasked with cracking down on illegal gambling, sex work, drug use, etc., went undercover by forgoing uniforms and getting backstage access to the performance.

The jazz concert consisted of two sets, and, before the start of the second one, the vice squad arrested Fitzgerald, Henry, Gillespie, Jacquet, and Granz on suspicion of illegal gambling, according to L’Heureux.

The now-defunct Houston Post newspaper reported that Fitzgerald dabbed tears from her eyes as she was being booked, per the Houston Chronicle's retelling of the ordeal in a 2011 blog post.

“I have nothing to say,” she apparently told reporters. “What is there to say? I was only having a piece of pie and a cup of coffee.”

Sgt. W.A. Scotton said saxophonist Jacquet had the dice in his hand as the troop of officers walked in. The troop confiscated the dice and $185 in cash. Then they agreed to wait until the first show was over before taking the performers to the police station.

Mr. Jacquet, the saxophone man, was the most nonchalant of those arrested. He told reporters his name was Louis Armstrong.

The officers took the crew of performers to the police station, where the in-question photo was taken by Post photographer Pete Vazquez, according to the Houston Public Library's digital archives and the Houston Chronicle. A number of photographers and reporters were supposedly waiting for the performers at the government facility when they arrived with law enforcement.

The Houston Metropolitan Research Center now owns the rights to the image, as well as another photograph taken in the same moment that depicts Gillespie and Jacquet in police custody, as well. The description for that image on the library's digital archival website says:

Ella Fitzgerald, John B. "Dizzy" Gillespie, Illinois Jacquet and Georgiana Henry being booked for gaming. The renowned jazz musicians were caught in a police raid on the Houston Music Hall. Fitzgerald, Gillespie and Jacquet were performing at the Music Hall as part of the Norman Granz Jazz at the Philharmonic concert tour.

The performers paid a fine and were released shortly after the photographs were taken, according to sources including the Houston Chronicle and L’Heureux. They made it back to the concert to play the show's second set without the audience knowing about their arrests.

In sum, Fitzgerald and other performers were indeed arrested during a show for a mixed-race audience in Houston. And, afterwards, Granz said he believed police targeted them because of the crowd's demographics, according to All About Jazz.

"The whole thing was just jive," Granz reportedly said. "They [didn't] like the idea that we'd 'mix' everything because...if you could prove that Black and white could sit next to each other, you could break up a lot of shit down there."

In Granz's 2001 obituary, The Guardian summarized the ordeal (and its aftermath) like this:

In 1955, Ella Fitzgerald, Dizzy Gillespie and Illinois Jacquet were arrested at a Granz gig, playing a game of craps backstage. The stakes were only a dollar, but it was enough for the Houston, Texas, police to demonstrate their prejudices. Granz protested, only to be charged with running the game himself. He could have got away with a small fine, but decided to fight the charges. It cost him $2,000 — a huge amount for the time — to successfully clear his friends' names.

In a 2022 article, Jordan Potter, a writer for the London-based Far Out Magazine, concluded: "[It's] quite plain to see, the true motivation behind the arrests was the police department’s unwillingness to accept the new laws that allowed Black and white people to mix at events."

In Houston, a Silent and Sudden Integration - HoustonChronicle.Com. 22 Oct. 2020, https://web.archive.org/web/20201022213243/https://www.houstonchronicle.com/local/gray-matters/article/The-silent-sudden-integration-of-University-of-10983415.php.

January 6, J. R. Gonzales on, and 2011 at 12:39 AM. ‘On Integration, Jazz and the Arrest of Ella Fitzgerald and Dizzy Gillespie in Houston’. Bayou City History, 6 Jan. 2011, https://blog.chron.com/bayoucityhistory/2011/01/on-integration-jazz-and-the-arrest-of-ella-fitzgerald-and-dizzy-gillespie-in-houston/.

The Night Ella Fitzgerald Was Jailed in Texas. 8 Feb. 2022, https://faroutmagazine.co.uk/ella-fitzgerald-jailed-singing-texas/.