Did a College Mirror Nazis by Having Students Wear 'White Privilege' Pins?

A widely-shared Facebook meme grossly misrepresented the nature of an infamous Holocaust-era policy and a month-long student campaign to stimulate debate around racial justice. 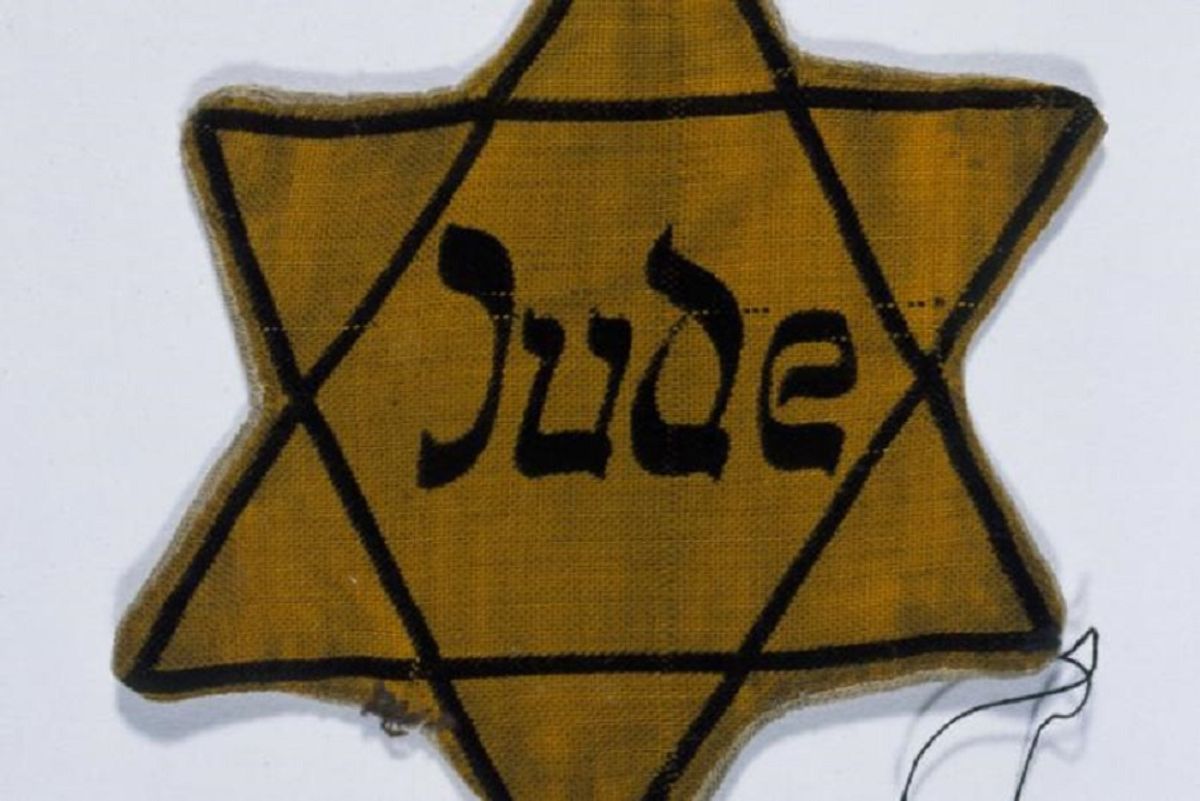 Claim:
Democrats at Elizabethtown College mirrored the Nazi policy of forcing Jewish people to wear the Star of David in a February 2017 campaign that had students wear "white privilege" pins.
Rating:

A February 2017 campaign invited students (in particular white students) to wear white puzzle-piece pins as symbols of self-reflection on the concept of white privilege and racial injustice.

The campaign was voluntary and not exclusive to white students, and it bore no reasonable comparison to the Nazis' violently-enforced persecution and segregation of Jewish people during the Holocaust.

In the summer of 2018, a viral Facebook meme compared a Pennsylvania college with Nazis in referring to an 18-month-old controversy over puzzle piece pins and the concept of white privilege.

On 26 July, Edward Miles Sr. posted a meme which included a 1945 photograph taken by Evgenii Khaldeii showing a Jewish man and woman wearing the Star of David in Nazi-occupied Budapest, along with the message "ELIZABETH TOWN [sic] COLLEGE DEMOCRATS WANT WHITE STUDENTS TO WEAR WHITE PRIVILEGE PINS WHEREVER THEY GO THIS MONTH. REMIND ME ONE MORE TIME WHO IS ACTING LIKE NAZIS AGAIN?"

The meme referred to a real controversy from February 2017 at Elizabethtown College, a small private university in Lancaster County, Pennsylvania. However, the meme grossly misrepresented both the nature of the "white privilege" campaign at the college, as well as the Holocaust-era policy of forcing Jewish people to wear the Star of David insignia.

On 11 February 2017, the College Democrats at Elizabethtown College launched a campaign to encourage students and faculty to wear white puzzle piece pins to represent white privilege, as part of a campaign to raise awareness and stimulate debate around racial tensions.

The group's president, Aileen Ida, told the Lancaster Online news website that "This project will encourage people to have conversations about race and how their inherent white privilege has a part in the systematic oppression of minorities -- whether or not they purposefully participate in the system."

According to the College Democrats, the "Personal Identity Campaign" was inspired by Barb Girod, a Lutheran pastor in Wisconsin, who undertook a similar effort to wear a symbolic white pin every day for a month in order to remind herself of her own privilege:

The project sponsored by the Elizabethtown College Democrats will follow Barb’s inspiring initiative to create the conversation greatly needed in Central Pennsylvania. Students on campus and in the community are encouraged to join our campaign to think about one thing – how race affects their life, whether directly or indirectly. Following the launch of our pin campaign, a sister campaign will be launched where students have the opportunity to anonymously tell personal stories about how race affects their everyday lives.

In an interview with The College Fix, Ida clarified that the pins were not intended to be worn by only white students, but rather to stimulate a general conversation about race and racial justice.

The campaign garnered local, national and international media attention and was met with some criticism, particularly from conservatives. Fox News contributor Lisa Boothe said the initiative would exacerbate racial divisions, and in the same panel discussion, fellow contributor Rachel Campos-Duffy claimed it was intended to cause "self-loathing" among white students.

Fox News host Jesse Watters visited the campus of Elizabethtown College, conducting a segment that mocked and dismissed the campaign as well as the concept of white privilege itself. Writing in the conservative National Review, Katherine Timpf argued that the campaign was designed to give participants the appearance of activism but would be ineffective in actually changing minds or prompting sincere debate.

University authorities stood by the right of the College Democrats to launch their initiative and emphasized in a statement that participation was entirely optional:

A statement regarding the Puzzle Piece Project: pic.twitter.com/fERz7OROiL

The Facebook meme was therefore accurate in its claim that "Elizabethtown College Democrats want white students to wear white privilege pins," but wildly off the mark in comparing the February 2017 campaign with the Nazi policy of forcing Jewish people during the Holocaust to wear the Star of David in order to be easily identified as Jews.

Participation in the Elizabethtown campaign was entirely voluntary, was not limited to only white students, lasted for just one month, and was intended to prompt civilized debate and self-reflection in the safe context of an establishment of higher education, especially on the part of white students, who constitute a significant majority at Elizabethtown College and in surrounding areas.

By contrast, the Nazi policy was enforced on pain of violence and death and was part of military-backed dictatorship's wider effort of segregating, deporting, and eliminating an historically oppressed and vilified minority group in Germany and other Nazi-occupied areas of Europe.

It should be glaringly obvious to any observer that the two campaigns defy even the most tenuous comparison.